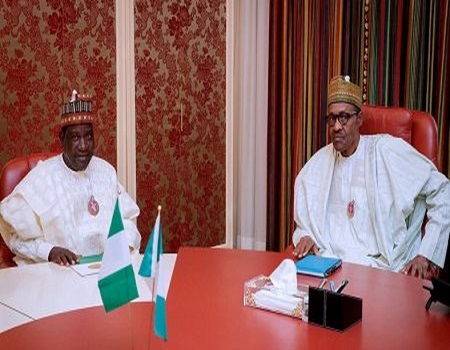 Governor Simon Lalong of Plateau state has briefed President Muhammadu Buhari on the latest attack, which claimed 13 lives in the state.

President Muhammadu Buhari has already strongly condemned the gunmen to attack, which took place in Mangu Local Government of the state.

Speaking to State House correspondents after the meeting on Friday, he said the attack was caused by cattle rustlers, leading to reprisals, with innocent citizens falling victims.

He said: “So, as a matter of fact, we woke up yesterday (Thursday) early in the morning to get information that people were killing themselves in a village.

“So I didn’t waste time, I took off to that village. My timely intervention and presence helped a lot. Because, after the first set of killings, the second set was reprisals killings.”

Lalong said his intervention had restored normalcy to the area, saying: “I spoke to the people, we buried the people and they understood with me and the place has remained calm, peace has been restored to that place.”

He further explained the cause of the crisis: “Our little investigations confirm that it was a group of cattle rustlers in a huge number that rustled over 100 cows. They were moving with them.

“We have also made an appeal through the youths that whenever there is this kind of challenge, they should move in and arrest some of the criminals. “Unfortunately, the youths came out, they did their best. In fact, I will call them patriotic. They went in and stopped the rustlers from moving with the cows and were able to rescue about 100 cows at the end of the day.

“So, after the rescue, they were only able to arrest about three or four those people and took them to the police station and returned to their various villages.

“That early morning, some of those rustlers who escaped, came back and started attacking and killing people in the villages.  So it was quite unfortunate.”

On a way out of the recurrent killings in the state, Lalong said a committee was working on new security architecture for the northern states, which will be based on community policing, as a way to provide a sustainable solution to the insecurity in the region.

When asked whether the north-central would consider a local security outfit in the mould of southwest “Amotekun,” he stated:

“When you talk about north-central, I am the chairman of the northern governors’ forum. We have taken a decision sometime last year.

“You will recall that at one time we met the president and we told him what we were doing. We set up committees and the committees have worked very hard.

“You will recall that we started our meeting from the northwest in Katsina. We are going back to have another meeting in north-central.

“The situation in the south might not be the same with the north but in the north, we are also looking at some ways that will also address these issues.

“So, we have gone ahead to set up committees, those committees have done their work and we are going to meet to address these issues once and for all.

“But I have not read the (Amotekun) document. I cannot claim to have read the details of that document, to understand what they mean by Amotekun.

“I saw various vehicles that were bought, but you know if it’s about vehicles, many vehicles have been bought in the north. I bought almost 100 vehicles and gave to the police but that is not what will address the insecurity in my state.

“So, it may vary from south to the north, but in the north we are trying to look for a comprehensive way that will help augment what the federal government is doing in respect to insecurity. “

Court remands pastor, two others in prison over alleged murder of LASU student