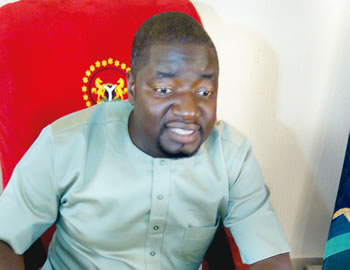 Honourable Yusuf Gagdi, Deputy Speaker of the Plateau State House of Assembly, is also the Chairman, Conference of State Legislatures of Nigeria. He speaks with ISAAC SHOBAYO on his relationship with the speaker, proposed grazing reserves in the state, among other issues. Excerpts:

You were recently elected chairman, Conference of State Legislatures of Nigeria, what informed your choice?

It is a miraculous thing because I did not go to Obudu, Cross River State, to become chairman of the conference. This has further added to my challenges and responsibilities. After the conference in Obudu, I did not come back to Jos,  I had to start working immediately. I have you were recently elected chairman, Conference of State Legislatures of Nigeria, what informed your choice?

It is a miraculous thing because I did not go to Obudu, Cross River State, to become chairman of the conference. This has further added to my challenges and responsibilities. After the conference in Obudu, I did not come back to Jos,  I had to start working immediately. I have to draw the lines so that the official responsibility that is vested on  me as the chairman of the conference involving 36 State Houses of Assembly will not affect my representation in terms of the people that voted for me, and will not negate my primary responsibility as the deputy speaker of the Plateau State  House of Assembly.

You are a member of the opposition Peoples Democratic Party (PDP) in the House and  also the deputy speaker. What is your relationship with the Speaker and other members of the ruling All Progressives Conference (APC) in the assembly?

The relationship  is cordial in the sense that, in the House of Assembly, it is not political ideology that matters; we are representing the people and are also an independent section of government. We understand that, from the day we were elected and inaugurated, we are no longer representing our political party but our constituencies and the entire state irrespective of weather they voted for you or not.

With this understanding, we try to keep our political differences aside and the interest of the state on the front burner. That is how we are  able to manage ourselves as true presiding Officers of the Plateau State House of Assembly from inauguration to date. We keep preaching to members that our priority is to ensure that we don’t talk politics but we discuss the interest of Plateau irrespective of wether it affects APC or PDP.

What has changed, in terms of legislation, from the 7th Assembly?

The 8th Assembly is unique and quite different from the previous ones.  If you look at the past activities of the assembly, there’s no assembly that has put the state first like the eighth assembly, in terms of peace.

When we can came on board, we noticed the dissension that existed among the people of the state. When a motion was moved regarding attacks and counter attacks in some parts of the state, we paid adequate attention to it and faced it head on, unlike in the past where legislators hardly put up a strong  committee in terms of the peace process.

We set up a strong committee  headed by myself and we went round the state.  We did our best  by visiting all the crisis-ridden communities to ensure that people live in peace with one another. By visiting these people, you are giving them confidence that they have a government that cares for them.

We noticed that there was mistrust among the people, we tried to educate them to ensure that they understand the situation and have confidence in the law enforcement agencies. The communities at loggerheads were not sitting at a roundtable but we were able to bring them together. That led to mutual understanding and trust and gave us to the peace we are enjoying today. And the committee made some good recommendations which have gone a long way to address the pathetic situation.

The state is presently enmeshed in controversy over  grazing reserves for Fulani herdsmen, what is your take on this?

This is a matter that any legislature will not want to talk about. Well, the House  of Assembly operates based on the cries of the people. You operate based on the yearning or the petition sent to you by your people. You operate within the need of the people. We have not received a briefing  from the government regarding grazing reserves, but a lot of people have been casting aspersions on members of the assembly in respect of grazing reserves.

Until I am officially communicated as a member of assembly that this is a policy of government which requires legislation, you  don’t expect me as a member to start talking on grazing area or grazing reserves.

Why is the House elongating the tenure of management committees in the  17     local   government areas of the state?

My position on this is very clear. I have severally condemned the management  committees at the local government level. They all came into power through the doctrine of necessity, because Plateau has the Plateau State Independent Electoral Commission (PLASIEC) law that does not tolerate a vacuum in the administration of local  governments, and the assembly also has a law that gives power to the government to take action if there is a case of embezzlement  in the local government.

I assumed they are not doing anything and if they are doing some things they  are doing them illegally because they do not have the blessing of the House. The governor informed us that he released VAT to the local government.

If they have access to VAT, what are they  supposed to do with the money? They are to initiate programmes that would have a direct bearing on the life of common people. I have  not seen a single hospital in the 17 local government areas where you can see paracetamol purchased by the chairmen. To be fair,  few of them are doing well.

What inform your passion for education?

I am somebody that have carried firewood to pay my School fees. Before I wrote my school certificate examination for the third time in Government Secondary School Dengi, my father had to sell  his farm land to pay for my SSCE. When looked into my constituency I discovered that there are many with similar experience. However in keeping with my covenant with the people, I personally paid for the SSCE examination of all students in my constituency in 2015. Another thing is the psychology of the people that elected us into power, people think as a legislator you must execute a project which is not the case, they want you to pay their children school fees, pay dowry for them among others.

CSOs alert US, EU of plans by ex- President to truncate Nigeria’s Democracy

NASS drama and the story of another failed ‘coup’

How I will change Lagos East if elected senator —ex-Assembly clerk, Abiru

Dariye: Travails of a former governor