Osun roads: Would the jinx be broken this time?

Features
By Seyi Gesinde and Niyi Oyedeji On Oct 21, 2018 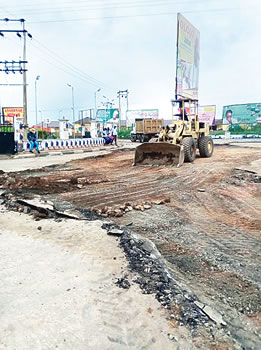 THE people in Ile-Ife in Osun State, recently woke up to unexpectedly sight engineers embarking on road construction works in the ancient city. This, which many saw as an unusual development, because of the number of years the roads were said to have been abandoned, is now the talk of the town, as many are grateful for the relief the roads will bring to the motorists, motorcyclists and other road users in Ile Ife and adjoining communities when completed.

The rehabilitation work being embarked upon by the Federal Government through the Federal Ministry of Works, Power and Housing, as confirmed by Sunday Tribune during a visit to the site, officially commenced on Monday, October 8, 2018. According to the site engineers, it was to facilitate the rehabilitation of the roads which had been in a sorry state for the past years.

Tagged the rehabilitation of the popular ‘Road 7’ linking Obafemi Awolowo University, Ondo Road and Ilesa bypass in Ile-Ife, the construction supervisor from Kopek Construction Company, Mr Majhid, an engineer, told Sunday Tribune that the plan was to rehabilitate the roads and give it a new look for people to ply at ease without any delay.

“You know, at Kopek Construction, we are known to represent standard as far as road construction and rehabilitation is concerned, and that is what we are going to be doing for people here to enjoy,” he stressed.

Majhid assured on the quality of work to be done, and while also corroborating this, enlightening further about the project work, the Project Coordinator, Mr Thomas, a Nigerian, said the road which is being sponsored by the Federal Government, is simultaneously being carried out in various part of the country, as according to him, “as we are here now, a major road rehabilitation like this is also going on in Ila in this state.”

A walk round town to feel the pulse of the people on the latest development in their community, a commercial motorcyclist who expressed his excitement about the road said, he was happy work had finally commenced on the site after several years of neglect, while a commercial bus driver, who also spoke with Sunday Tribune, said, “the rehabilitation of the road will now ease the stress of the daily gridlock on the road. You will pity us whenever you see us being forced to stay in gridlock on these roads on several occasions but thank God for this intervention.”

A student of the Obafemi Awolowo University (OAU), Miss Akande Olanike,  speaking with Sunday Tribune said, «the rehabilitation of road will now help the students of the university that reside off campus to move freely to school without any delay,” as according to her, “there are instances when we would be rushing to school and gridlock on this road would delay us for several minutes, thus making us late for lectures.”

Sunday Tribune sought to know the reason behind the sudden interest in the road,  especially after the September 22 governorship election in Osun State? The federal roads in Ile-Ife, Ila-Orangun, and several other bad road networks in Osun State, were some of the campaign issues in the last governorship election, with Senator Iyiola Omisore, candidate of the Social Democratic Party (SDP) on the election vehemently condemning the state of the roads.

Senator Omisore had usually blamed  governments, including the Governor Rauf Aregbesola-led All Progressive Congress (APC) administration for abandoning most of the road projects he facilitated to the state as the chairman of the Appropriation Committee in the Senate. The roads being currently reconstructed are parts of such abandoned projects.

Speaking with Sunday Tribune, Omisore, who was also said to have visited the engineers on the site to check the progress of works, said the return to site was a product of strategic alliance his party went into with the ruling party. He said as an engineer, the state of the roads was one of his major interests, as he had always wanted Osun State to be developed in infrastructure. According to him, what the people are seeing now is in furtherance of an initiative which started under the late former President Umaru Musa Yar’Adua.

“In 2008, there were Presidential Special Projects under the then President Umaru Yar›Adua administration, which were to be embarked upon throughout the federation under six different categories. As the Chairman of the Appropriation Committee in the Senate then, I insisted that the government must carry out at least one of such projects in the South-West, which as proposed then was the dualisation of roads in Ife, starting from Mayfair junction to Lagere, to Enuwa, to Moore and to Ilesa bypass, which turned out to be the first ever major road dualisation project that would be done then as the senator representing Osun East,” Omisore explained.

He said apart from facilitating the project, «I ensured it was funded. They started then until I left Senate in 2011, when it was later abandoned. Since then no one followed it up.”

According to him, there were several other projects which he facilitated but were later abandoned in Osun State like the “Ife Multi-Purpose dam, the Navy Post Graduate School in Ife, a Mini Stadium at Ondo Road,” likewise in «the Obafemi Awolowo University (OAU), Obafemi Awolowo Teaching Hospital (OAUTH), the University of Ibadan (UI), University College Hospital (UCH),” among others.

Omisore, speaking further with Sunday Tribune said, what brought about the resuscitation of the project almost immediately after the governorship election was the coalition agreement the SDP entered into with the APC government. Putting Osun roads in good condition as entrenched in SDP manifestos, he stated, was part of what was negotiated with the APC.

“After the SDP entered into a coalition agreement with the APC for the election rerun, part of the agreement is that the government has to pay salaries of workers, pensioners’ remunerations, then all the projects abandoned when I was in the Senate must be revived. So, immediately I travelled to Abuja. I went to the Ministry of Works to discuss with the authorities on the need for the projects to come alive, and that is why we can now see that the engineers have been mobilised to site to do the work.

“At least, we can see that the coalition is already working. The road constructions going on are one of the immediate benefits of the coalition agreement with the APC. As a leader, I must take decisions in the overall interest of our people. I’m also pursuing other abandoned projects, but we have to do it one after the other; all the projects have to come back on the stream. It is all primarily for the welfare of the people,” Omisore said.

It will be recalled that Omisore and other party leaders led SDP into an alliance with the APC in the last rerun governorship election which took place on September 27, and which was later won by the APC candidate, Alhaji Gboyega Oyetola. The coalition agreement which the party said it went into with the APC had to do with the «eradication of the current modulated salary structure which has brought untold hardship to civil servants and retirees in the state.”

Also, SDP said, “the new administration is expected to ensure the payment of full salaries and pensions and work out modalities for settlement of the outstanding arrears in the soonest possible time after its inauguration, while it is also expected to “review the policy of single uniform for pupils in public schools in the state as well as the truncated 6-3-3-4 educational structure and school curriculum.”

The SDP said part of its agreement also was the “restoration of the dignity of our traditional rulers in the state through the resuscitation of the Council of Obas and the facilitation of regular meetings both at the local as well as state levels, likewise the “reinvigoration of the economy of Osun State through patronage of residents of the state in award of contracts and public procurement,” while it said “the coalition talks drew attention to the need to prioritise the rehabilitation of inter and intra city roads in the coming dispensation in the best interest of the generality of Osun indigenes.”

Gold and the goddess: How mining polluted sacred Osun river; 100,000 may die in five…