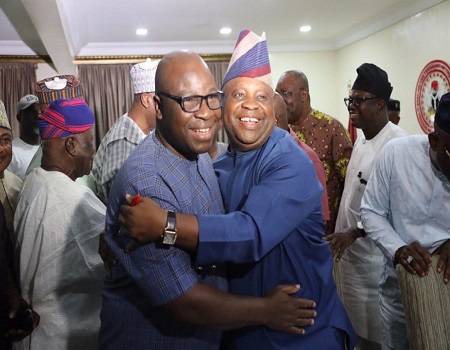 PEOPLES Democratic Party (PDP) gubernatorial candidate for the Osun state election, Senator Ademola Adeleke and his rival in the last Party primary, Dr. Akin Ogunbiyi, have reconciled and agreed to work together for the success of the party in the coming election.

This was made possible by the PDP National Campaign Council for the Osun state gubernatorial election led by Senate President, Bukola Saraki, who announced the breakthrough in Abuja on Wednesday.

After a meeting which he hosted at his residence, Saraki announced to journalists that both men had put the past disagreement over the primary behind them.

He said they had signed a Memorandum of Understanding (MoU) that also includes other party stakeholders in Osun state.

Saraki praised both politicians and assured that with their coming together, victory was assured for the PDP in Osun state.

The Senate President said: “What just happened is the signing of MOU between not just the two aspirant of the Osun gubernatorial primaries of PDP, but between all the PDP stakeholders in Osun state, especially between two Osun PDP gubernatorial aspirants who a lot of people think cannot come together.

“Today, what you are seeing is the unity of the PDP in Osun state. The two aspirant who contested in an intensive primary are now together finally so that we will be able to present a united party for the forthcoming election.

“We are very happy with what we have seen today. The credit goes to two of them, Senator Ademola Adeleke and more particularly Dr Ogunbiyi, because we have all gone through election and we know what is like to lose an election. But he puts the party first and they came together in the interest of the people in Osun state and to rescue the people.

“So, what you have just seen is a sign that Osun PDP is united, and with a united PDP, victory is sure for the party in the election in the next two weeks.”

In his remark, Adeleke, expressed delight that unity had been achieved by both sides, saying that it was what the people of Osun had been waiting for.

He said: “Am so happy that we have seen today and God has answered PDP’s prayer.

“For us and the PDP, victory is assured and by the grace of God, we are going to win the gubernatorial election come 22nd.

“We thank the leadership of the PDP, especially the Senate President, Chairman of our National Campaign Committee and all our party leaders to have organized this.

“The electorates are waiting for us. I believe that they want us and this is what they have been waiting for because, after primary, there should be reconciliation.

“And with this reconciliation everybody is happy, the electorates are waiting for us and sure victory is ours.”

In his own remark, Ogunbiyi said PDP must win Osun in the coming election.

He assured that he would work with the candidate to achieve this objective.

The former governorship aspirant added: “Am very delighted that we got to this point, and is for the interest of the Osun people and Nigeria at large because we believe Osun for us must be taken, for us to be able to wrestle power from the All Progressives Congress come 2019.

“And we are going to work together for the party’s victory in the 22nd gubernatorial election.”