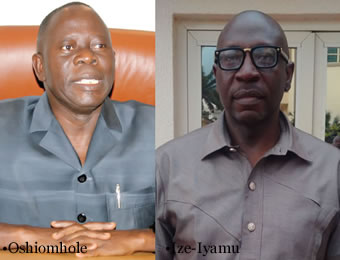 CANDIDATE of the All Progressives Congress (APC) in the coming governorship election in Edo State, Mr Osagie Ize-Iyamu, has said that a former national chairman of the party, Adams Oshiomhole, is not the face of his campaign.

Ize-Iyamu also alleged that Governor Godwin Obaseki and his deputy, Phillip Shaibu, have recruited student union leaders to disrupt Saturday’s flag-off of his campaign in Benin City. He made the allegation after securing the endorsement of President Muhammadu Buhari, following a meeting at the Presidential Villa, Abuja, on Friday.

“It is the PDP that keeps mentioning his name, talking about him and playing tapes as if he is the candidate. “But I want to inform you that I am very well known in Edo. I have lived there all my life. I have been chief of staff, secretary to the state government and we also have a local director-general of the campaign.

“Of course, Adams Oshiomhole comes from Edo, he is an APC member and it is natural for him to campaign for our party, but certainly he is not the face, unlike what happened four years ago where, maybe, the candidate could not speak and somebody had to speak for him. “But anyone will tell you that everywhere I have gone, I have been the one speaking. So, that statement is not correct.”

The chairman of the APC National Caretaker/Extraordinary National Convention Committee and governor of Yobe state, Mai Mala Buni, disclosed the president’s endorsement while briefing State House correspondents after the meeting. Also speaking, Ize-Iyamu, who received the party’s flag from the president, denied hosting members of the state House of Assembly who purportedly impeached the speaker and deputy speaker on Thursday.

Speaking on the fears of violence marring the conduct of the election raised by the Independent National Electoral Commission (INEC), he blamed Governor Obaseki for stoking tension. Ize-Iyamu said: “On the issue of violence that you mentioned if you ask your correspondents in Edo, it is the governor that has been beating the war drums.

“My billboards are being vandalised, nobody has touched their own. We wrote petitions to the commissioner of police,  the Director of DSS and they will attest to the fact that on a regular basis, they are destroying our billboards. “They are the ones that want to make the state ungovernable and I am sure you heard the governor say that he and his deputy have immunity and so they can deal with anybody.

“I don’t have immunity, I don’t want to go to jail and it is not in my character to deal with anyone. They did their flag-off at the stadium, nobody molested them. “This morning, I placed a call to the DSS director to tell him that I was aware that the deputy governor had sent money to the student union leaders, appealing to them to come and demonstrate at  Ugbowo, which is the route we are taking to our flag-off tomorrow (Saturday).

Of course, the boys were just looking at him and informed us. “So, we are not beating any war drum, we believe in peace,  our president believes in peace, our party leaders believe in peace and we cannot disappoint them. “So, I can assure you that on our part, we will conduct ourselves in a peaceful manner, our campaign will be done peacefully, the elections, by the grace of God, will be done peacefully.

We are only appealing to the PDP and the governor to do the  same.” The candidate also denied that he condoned illegality by providing his residence for members of the state House of Assembly loyal to Oshiomhole to inaugurate themselves and impeach the house speaker and his deputy.

While noting that they never met in his house, he praised the action they took and blamed Obaseki for engaging in illegality by operating with a minority house. Ize-Iyamu argued: “On the question of the House of Assembly, let me quickly debunk what you said. Nothing was done in my sitting room.

So, that statement is false and there is no truth in it. “Number two, it is not I or the APC that is condoning illegality, I  think it is Obaseki that has been condoning illegality because, for over a year, he was running a house that was not  properly constituted.”