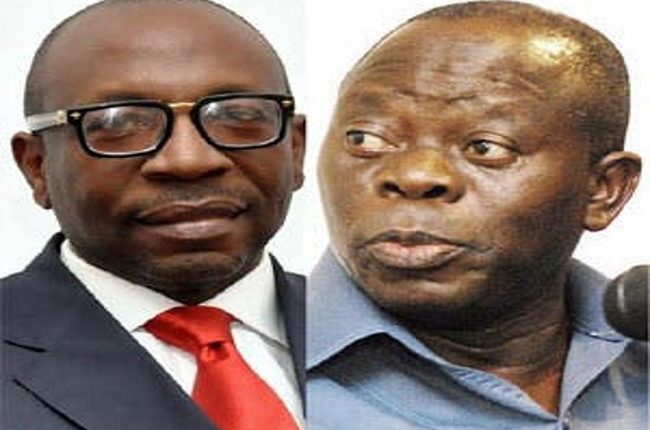 THE Progressive Governors Forum on Friday said former national chairman of the All Progressives Congress (APC), Mr Adams Oshiomhole, could cause the party to lose the coming governorship election in Edo State.

The forum, made up of APC governors, said in a statement that the leadership of the APC must caution Oshiomhole to review his campaign strategy in that state.

In the statement by the Director-General of the forum, Dr Salihu Mohammed Lukman, the governors appealed to the leadership of the party to caution the former national chairman of the party, claiming that he had hijacked the party’s campaign in the state and sidelined other leaders of the party.

In the statement entitled ‘Progressive Politics – Which Way APC?’ the group claimed that the former national chairman of the party had turned the forthcoming election in Edo State to a personal war between him and his estranged political son, Governor Godwin Obaseki, who is the candidate of the Peoples Democratic Party (PDP) Governor Obaseki defected to the main opposition party, having been denied the opportunity to contest the primary of the APC, where Mr Osagie Ize-Iyamu, perceived as Oshiomhole’s anointed candidate emerged as candidate.

Appraising the campaign led by Oshiomhole, he described it as rich in personal attacks and lacking in issues that would endear the Edo electorate to Ize-Iyamu.

He said: “We need to appeal to Comrade Oshiomhole to ‘calm down’. This campaign is not about his person. More importantly, we need to stress the point that part of the political vision of any progressive is that once elected into government, we commit ourselves to issues of agricultural development, jobs creation, education, health, infrastructural development, poverty eradication and rapid technological development.

“APC has ruled Edo State since the time of Comrade Oshiomhole as governor of the state. Up to today, whatever achievement Edo State experienced under Governor Obaseki, between 2016 and now, APC must own it, just like we should be able to accept some of the setbacks.

“Anything Governor Obaseki is able to achieve must be credited to APC as a party.

Our Edo campaign should be able raise the awareness of Edo people that had Governor Obaseki been in PDP, it would have been impossible for him to record any achievement.

“Based on the personalised way the APC Edo State campaign is being carried out, PDP all of a sudden is coming out very strongly to campaign for votes. If the Edo State APC campaign is to go ahead this way, when APC wins the election, who will run the affairs of the state as governor? Is it Comrade Oshiomhole or Pastor Ize-Iyamu? If our party wants Edo people to vote for our candidate, Pastor Ize-Iyamu must be very visible and be seen as the face of the campaign.

Comrade Oshiomhole should take a backseat and play the facilitatory role our leaders play in all similar circumstances.

“It is important that Comrade Oshiomhole endorse a situation where the party is able to apply the Lagos model to the Edo State governorship campaign, especially because we want the Edo people to be able to have confidence in our candidate, Pastor Osagie IzeIyamu and believe that when they elect him, he will be the one that will govern the state.

“The responsibility for ensuring that this is done rests with the Mai Mala Buni Caretaker/Convention Working Committee. Good enough, they have set up a National Campaign Council under the leadership of His Excellency, Abdullahi Umar Ganduje, Governor of Kano State.

“Governor Ganduje’s National Campaign Council should be able to assume leadership and take the necessary steps to redirect the Edo State APC campaign to have a clear progressive bearing.

“As part of those steps, it should ensure that APC campaign messages appropriate all development achievements recorded under the APC administration of Governor Obaseki.

“In addition, we must take steps to also cut the oxygen supply to PDP campaign, which is presenting our party and our candidate as promoters of violence. Our campaign for the Edo election should therefore amplify messages of peace and what we need to do to achieve that.”

He said all hands must be on deck to win back the hearts of Nigerians in the 2023 general election when President Muhammadu Buhari will no longer be on the ballot.

He said: “Perhaps we need to recall that with the exception of the presidential election of 2019, in virtually all elections between 2018 and today, in almost all cases where APC won, it was marginal.

“This was almost the experience in virtually all cases. We lost states like Bauchi, Adamawa and Oyo, where it would have been guaranteed since we won these states during the presidential election with wide margins.”

Meanwhile, national leader of the All Progressives Congress (APC), Senator Bola Tinubu, on Friday, attacked Governor Obaseki over non-inauguration of 14 lawmakers since last year and Thursday’s crisis in the House.

In a statement personally signed by him on Friday, Senator Tinubu accused Governor Obaseki of sponsoring hoodlums to deface parts of the state House of Assembly building in Benin and feigning the building is undergoing renovation.