Options before PDP in 2023 presidential election 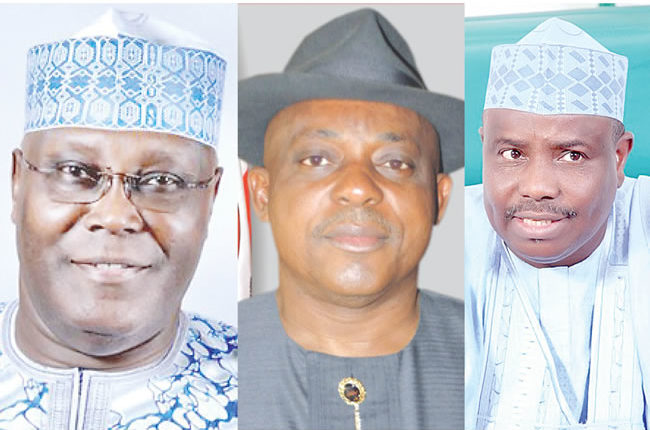 LEON USIGBE analyses the options before the main opposition party, the Peoples Democratic Party (PDP), as the nation edges closer to the 2023 presidential election, with rising agitations from the southern part of the country for the presidency.

IF the All Progressives Congress (APC) were to select its 2023 presidential candidate from the south, how would the main opposition, the Peoples Democratic Party (PDP), respond? This question is generating huge debate among PDP faithful around the country, following emerging indications that the governing party may be looking towards the south. All the perceived presidential aspirants under in the APC so far are from the south, which gives credence to perception that the ruling party may pick its flag bearer from the zone.

In view of the unwritten power rotation understanding between the North and the South, after the eight years of President MuhammaduBuhari who emerged from Katsina State in the North-West, the APC would be reasonably expected to look elsewhere for its next candidate. Along this line, among the names being touted as possible presidential candidates for the party at this time are one of its national leaders, Asiwaju Bola Tinubu; the governor of Ekiti State and chairman of the Nigeria Governors’ Forum (NGF), DrKayodeFayemi; Minister of Transportation and former Rivers State governor, RotimiAmaechi, and former Imo State governor, Senator RochasOkorocha. Others are the incumbent Imo State governor, Senator Hope Uzodinma; Works and Housing Minister and former Lagos State governor, BabatundeFashola; as well as former national chairman of the APC and ex-Edo State governor, Comrade Adams Oshiomhole.

Even though the name of the governor of Kaduna State, Malam Nasir el-Rufai has also been mentioned as a possible presidential candidate for the APC, party sources revealed that he might just be positioning to emerge as the running mate of a candidate from the South. The posters that were suddenly displayed on the streets of Abuja recently seem to confirm this assertion as he was paired with Amaechi as the running mate to the transportation minister in the 2023 contest. The speculated southern APC presidential aspirants seem to be working on the theory that since the north produced President Buhari, the ticket would shift to the opposite region. However, a southern candidate for the APC would not just have consequences for the governing party but it will also cause complications for the other rivals, which may be pressured to act likewise.

The situation will, indeed, be complicated for the PDP whose members believe that its 2019 presidential candidate and former Vice President, AtikuAbubakar, from Adamawa in the North-East, is eyeing a return to the contest in 2023. Since losing the 2019 election to Buhari, Atiku has managed to remain in the limelight, exploiting the social media space to make observations and expose his stance on issues of local, national, and international interests. His support groups have also been regularly active in sustaining him in the consciousness of his supporters as they continue to use the media to promote his positive image in the run up to 2023. All this may suggest that Aitku may still be running for the ticket. The complication. “If Atiku gets the PDP’s presidential ticket that will pit him against an APC candidate likely to emerge from the south. That will have serious consequences on the election as far as the PDP is concerned,” a PDP chieftain, who wanted to remain anonymity, volunteered recently.

There are also suggestions, though, that should Atiku be out of the frame, the lot may fall on his running mate in the 2019 election and former governor of Anambra State, Peter Obi. He too has not faded away since that unsuccessful attempt to be elected vice president. He is from the South-East and observers say he should be a prime candidate if the PDP zones the presidential ticket to the region.

Reports have also emerged that former president, DrGoodluck Jonathan, may be conscripted into the race. *************Still, a member of the PDP, it was initially thought that he was being pressured by northern elements in the APC to throw his hat into the race. Term limit and his positive disposition to the North have been touted as the reasons the North may be interested in another Jonathan’s presidency. Political pundits also suggest that the North wants to retain power and having apparently been constrained by the eight years of Buhari, a Jonathan presidency will provide a quicker route back. The Bayelsa State-born Jonathan will be tied to only four years by constitutional term limit having already served four.  Another argument in favour of the return of the former Bayelsa governor is that the North will be more comfortable with him than any other person that may emerge from the South. This, according to some analysts, is based on the attention he paid to the development of the North as president and his continued deference to President Buhari who beat him in 2015. The question remains open as to whether, if he succumbs to pressure to contest, it will be under his party, the PDP or the ruling APC.

Some people supporting the former president were reported to have met recently to explore ways to draft him into the race in what appears to be a steady push to return him to power. But he has denied that he is under pressure to join the race, indicating his preference instead, to concentrate on promoting peace and sustainable democracy across the African continent.

Some sections of the PDP are also talking about Governors NyesomWike of Rivers State and AminuTambuwal of Sokoto State whose bond appears to be strengthening as 2023 approaches. There is no clarity in their possible aspiration in the presidential election but their influence in the party places them in the position to determine who gets the ticket. While Wike has been perceived as the major financier of the main opposition since its fall from power in 2015, Tambuwal is the chairman of the PDP Governors’ Forum, a position that gives him the edge in the control of the party structure. Tambuwal contested the party presidential primary that was eventually won by Atiku. Because of this, there are some party members who believe that he may want another shot at the ticket with Wike as his running mate, or where the party decide to zone the ticket to the South, Wike may have a shot on the presidential ticket with Tambuwal as his vice, particularly if the candidate of the APC picks it flag bearer from the South. Whatever applies to Tambuwal also applies to former Kano State governor, RabiuKwankwaso, who has been all over the South consolidating alliances with political actors.

Governor Dave Umahi of Ebonyi State is thought to be interested in the 2023 race but the situation around him is conflicted. Though a member of the PDP, there are indications that he feels it may be easier for him to realise the ambition in the APC. Consequently, there have been consistent rumours of him defecting to the ruling party. The PDP is now engaged in a frantic effort to clarify his standing within the party.

The party members are also contemplating another scenario which is that even if the governing party produces its candidate from the South, which is seemingly the most plausible outcome for the next election, the PDP may stick with a northern candidate, which then gives Atiku or Tambuwal or Kwankwaso a leeway to express their interests. But the argument here is split. Some believe that if the PDP selects a northern candidate and the APC picks its own from the South, the move may sway the northern voters to the APC if the northerners desire to remain in power.  The flip side is that the move will alienate the entire South, which will consider itself shut out of power for another four or possibly, eight years.

However, the PDP is, at this moment, preferring to tread a cautious path, opting to put in abeyance any decision on which part of the country will produce its presidential candidate. Despite maintaining a low profile on the issue, the party sources maintained that its intent is on retaining its zoning formula while not committing to any region of the country at this time. A member of the PDP National Working Committee (NWC), who spoke with the Nigerian Tribune on anonymity, affirmed that all parties have their zoning arrangements but did not say how the party will adhere to its north-south rotation given the presence of a North-East politician on the ticket in 2019.

For the PDP national publicity secretary, Kola Ologbondiyan, though, the party’s organs are yet to discuss the 2023 zoning arrangement.  “The various organs of the party are yet to meet. That is all I want to say. Until the various organs of the party have come to a conclusion, I can’t say anything. But also note that whatever any other party is mouthing, including the APC, will not stampede the PDP. Ours is a structured political party with huge experience. And because Nigerians are looking up to our party, we must strictly organise, be meticulous and structured. That is where we are,” the PDP spokesman said.