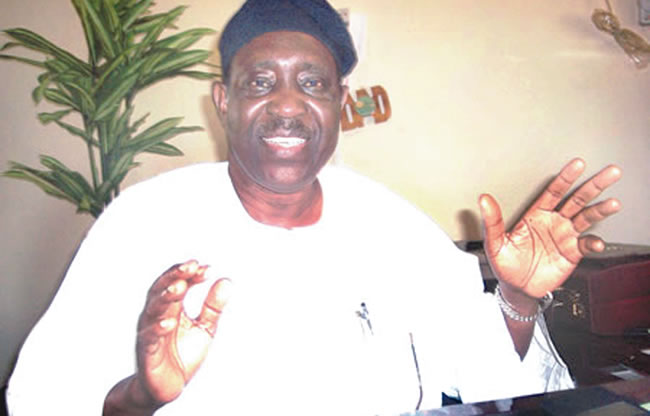 A Board of Trustees (BoT) member of the Peoples Democratic Party (PDP) , Senator OluAlabi, in this interview by KUNLE ODEREMI speaks on the supremacy battle in the South-West chapter of the party and how the way out.

WHAT do you think in the real issue crisis ricking the South-West chapter of the Peoples Democratic Party (PDP) that led to the emergence of two parallel leadership structures?

The problem is that we are architects of the rumpuses in the party. We had similar crises in the past. About two years ago, we had it and it was spearheaded by Senator IyiolaOmisore. Now, the Adeleke dynasty wants to take over the party, similar to what Omisore did. And now, they are using those who are ready to support them, principally, those who defected from the All Progressives Congress (APC). And they found a ready tool in Ayo Fayose. Normally, governors of any region are the leaders of any party in that region. But Fayose doesn’t want to agree. He went to set up a parallel zonal committee, which he has no power to do. Even, in Ekiti, he is no longer the leader of the PDP there. The highest political office holder in Ekiti is Senator BiodunOlujimi and naturally she is the leader.

In Osun State when AdemolaAdeleke and others were fighting Omisore, I told them that DemolaAdeleke it should be him as the highest political office holder. So, it is a similar situation. We invitedAdeleke when APC rejected him to take over the ticket of his late brother, isiakaAdeleke. We begged somebody to step down for AdemolaAdelekewithin 24 hours. He now thinks everybody in PDP is an idiot. Two people are disturbing the South-West PDP: Senator AdemolaAdeleke in Osun and another party member in Ogun State. They are the ones causing all the troubles in the zone.

But they are accusing those of you who the elders of the PDP taking sides instead being neutral in the South-West PDP leadership crisis?

We called for a meeting but they (Fayose camp) refused to come. I am Adeleke’s contemporary; I have been making money before Adeleke left school. So, he is now a superrich man and he is the one behind all the tension even at the PDP national headquarters.

As a member of the Board of Trustees (BoT) of the PDP, have you ever taken the leadership up on this issues?

In fact, AlhajiShuibOyedokun (also a member of the BoT) had a one-to-one meeting with PDP national chairman, Prince UcheSecondus that if anything is wrong in OsunPDP, that he should consult with the elders in the state or the region. Why will Secondus take decision on what he doesn’t know? Look at our party secretariat, they have bought it with N70 million in the name of a private university; not even in the name of the party. When a court of competent jurisdiction returned HonourableSojiAdagunodo as Osun PDP chairman, he could not enter the place. So, money is the root of the problems we have in the party here in the region and in the state.

So, I have never left PDP since it was formed. I was the first governorship candidate of the party and I am addicted to the party. And I will fight to destroy anybody who wants to destroy PDP to a standstill. I am neither for Paul nor for Apollo. Some of our members have been told that there should not be any other candidate than AdemolaAdeleke. I am not opposed to him becoming the candidate, but he must go through the primaries. We have seen how the Supreme Court threw out cases due to unfair primaries. He is fighting for the soul of the party. It was the out-gone South-West committee that helped him.And nobody has done two terms as zonal leaer. In fact, Oyo State has never been made chairman. And they normally pair Oyo and Osun; Lagos and Ogun;Ondo and Ekiti. That is the pairing formula. We are not ready for anybody to buy the party. That is all!

Our party secretariat which we have been using for the past three or four years since we left Omisore’s own has been bought over in the name of a universityNow, we are looking for another building to serve as party secretariat.

How do you restore peace in the South-West PDP?

Now, the leader of the PDP in the region is Governor SeyiMakinde of Oyo State and he has set up a reconciliatory committee under Prince OlagunsoyeOyinlola. Ayo Fayose and his gang went to Lagos to form a parallel committee. There was no single BoT member at that meeting. They just want us to lose the next election. If care is not taken, the All Progressives Congress (APC) will come back in the South-West, except Oyo State.

So, is there a way the two camps involved in the leadership crisis in South-West strike a kind of compromise in the light of what you have just said?

Everybody should listen to the reconciliatory committee headed by Oyinlola. He doesn’t belong to A or B; he has just returned to the party. As a former governor and national secretary of the party, he has a good insight of what is going on. So, Oyinlola is not for any group. If I say we are for a group, which group did we belong? Which group are we fighting for? We are fighting for the party. But, the people in the other divide are saying AdemolaAdeleke or nobody as candidate. We must have free and fair primaries so that we win an election and the court will throw us out.

The deputy national publicity secretary of the party, Prince DiranOdeyemi, was at the Lagos meeting and it has a lot implications for the ongoing power tussle.

Diran Odeyemi caused all the problems Soji Adagunodo has. They are from the same local government area and they are like twin brothers. But, they have succeeded in having him on their side.

My response is this: to solve the crisis, the zone must come together first; accept SeyiMakinde as the leader, being the most senior political office holder in the zone. That is the first solution. In fact, all the posts given to Osun, I am ready to give them to the Adeleke group. I believe in orderliness and protocols. It is not the age of SeyiMakinde that is the issue here; he is the only governor that we have in the zone; he is the only person we should revert to. Fayose cannot lead anybody. That is why we reconstituted the reconciliation committee. If they want the committee to be expanded, we can talk to Makinde to include their people. That will be a way-out. The committee can be expanded under the chairmanship of Oyinlola.

But one of the complaints of that group is that some members of the reconciliation committee left the party and only came back not too long ago, whereas others have remained with the party through tough times over the years?

They are talking rubbish. Fine, Oyinlola left and came back. Even in the Adeleke group, Peter Power, and other left and came back to the PDP. Peter Power Can you imagine, Peter Power was the chairman of Local Government Service Commission under former Governor RaufAregbesola and that is one of the most powerful positions. He was there for eight years. He abandoned the party. Now, he is no longer on the pages with Aregbesola today. So, you can hardly see politicians who have not engaged in cross carpeting these days. If you gather eight party members, it is hard to see seven who had not crossed from one party to another. Mention them one by one. DiranOdeyemi was from Alliance for Democracy (AD), LereOyewumi was also from AD. Omisore was AD. We are the only people who have been in the PDP from the beginning till now; we are in love with the party. Now at 77, do I want to become a councillor or do I want to go back to the Senate? I don’t have a price. I may not be fantastically rich. But I am very comfortable.  What pains me is that I caused all the trouble by inviting AdemolaAdeleke to come for the Senate ticket from Akinlabi; now, I am regretting the action.

Options before PDP in 2023 presidential election

Cost of governance in recession

Umahi’s defection to the APC, what has changed?

Resetting Nigeria! •Why the project is not working