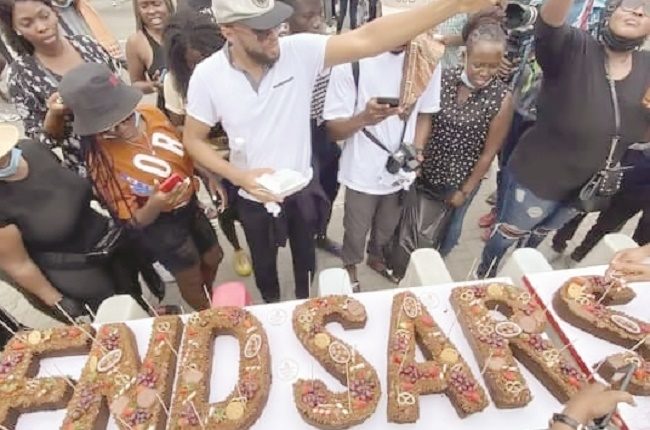 The #EndSARS protest in Nigeria has indeed brought to the fore on how some individuals and groups can fuel crisis through covert means. In the case of Nigeria, we were confronted with this challenge so much so that Nigeria almost gave in. These merchants of violence deployed their entire arsenal towards ensuring that the once peaceful protest degenerates into a snowball of fire that almost engulfed Nigeria.

What happened in Nigeria wasn’t a peculiar case as there are several examples of other African countries that went through this route, and the resultant consequences were not pleasant. This was the case that eventually led to the involvement of the International Criminal Court (ICC) in charging some individuals for crimes against humanity for orchestrating acts of genocide.

Since the inception of the International Criminal Court more than a decade ago, only Africans have been brought to trial. The ICC, which began hearing cases at The Hague in the Netherlands in 2002, was established as a court of last resort, to prosecute grave abuses when countries would not or could not act against those responsible.

Of the ten preliminary examinations that have proceeded to full investigations, nine have involved conflicts in Africa. But the court’s lead prosecutor, Fatou Bensouda, points out that in six of the cases, the ICC intervened at the request of the governments involved.

For example, Bahr Abu Garda was indicted on 7 May 2009 on three counts of war crimes concerning the situation in Darfur, Sudan. Abu Garda was alleged to have been a commander of a splinter group of the Justice and Equality Movement (JEM), a rebel group fighting in the Darfur conflict against the Sudanese government.

He was accused of leading JEM forces under his command (in conjunction with other rebel forces) in a raid on the Haskanita base of the African Union Mission in Sudan (AMIS) on 29 September 2007, in which 12 AMIS peacekeepers were killed, and eight were seriously injured; the base was also extensively damaged. Abu Garda was accused of being criminally responsible for murder, pillaging, and “intentionally directing attacks against personnel, installations, materials, units and vehicles involved in a peacekeeping mission.

Germain Katanga was indicted on 2 July 2007 on three counts of crimes against humanity and six counts of war crimes with regard to the situation in the Democratic Republic of the Congo (DRC). On 26 June 2008, the charges were revised to four counts of crimes against humanity and nine counts of war crimes. He was alleged to have been the leader of the Front for Patriotic Resistance in Ituri (FRPI), an armed group composed mostly of members of the Ngiti ethnicity that was active during the Ituri conflict.

Joshua Sang was indicted on 8 March 2011 on four counts of crimes against humanity with regard to the situation in the Republic of Kenya. He is alleged to a top leader of an ad hoc organization created by members of the Kalenjin ethnic group which was created to perpetrate violence on behalf of the Orange Democratic Movement (ODM), the political party of presidential candidate Raila Odinga, during post-election violence in December 2007 and January 2008. As a broadcaster for the Kass FM radio station, Sang incited Kalenjin youths to target civilians of the Kikuyu, Kamba, and Kisii ethnic groups, which were perceived to be supporters of the Party of National Unity, the political party of Odinga’s opponent during the election.

The case of Joshua Sang shares some resemblance in Nigeria where some individuals resorted to using the social media to incite the people against the government and in the process violence erupted that led to the loss of lives, destruction of public and private properties, looting of warehouses, looting of banks and other despicable acts.

It must be noted that there is a trend in those convicted in the sense that they are mostly members of the opposition that deployed unorthodox means towards attempting to effect a change a government. If we recall, after the EndSARS protesters demanded the total reform of the Nigerian Police Force under a five-point demand, it subsequently transformed into the demand for the ousting of President Muhammadu Buhari from office.

If we must admit, this was where things went awry because there was no justification for the additional demands made by the protesters. This is on the heels that the government had initially granted the five demands of the protesters. And what was responsible? The propagation of fake news through social media, as well as faulty and unfounded accusations, deliberated peddled by some oppositions of the government in the public space.

The case of Félicien Kabuga, the Hutu financier of Rwanda’s 1994 genocide, captured after 26 years in hiding, is fresh in our minds and should serve as a deterrent to those fueling conflicts.

Kolawole is a University teacher and wrote from Keffi.