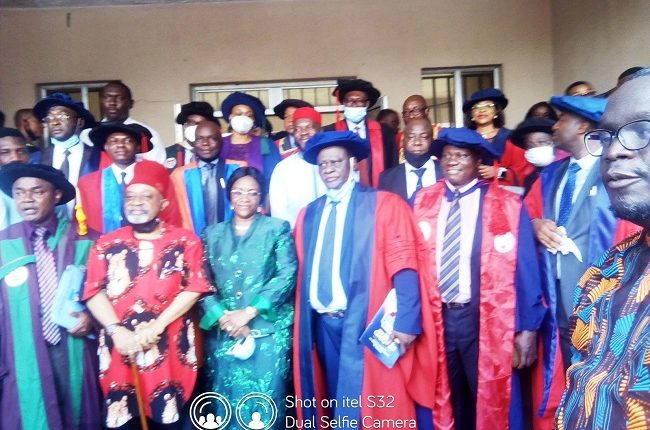 Chukwuemeka Odumegwu Ojukwu University (COOU), yesterday, held an Induction and Oath taking ceremony of fifty-six doctors for the sixth set of its medical students into practice.

In his address, Prof. Walter Nwafia, the Provost of COOU College of Medicine, said the institution had made steady progress in the training of qualified medical doctors and other academic fields.

Nwafia said the college, in conjunction with COOU Teaching Hospital, is sustaining competitive programmes in various departments in the university.

The provost, who appreciated the state governor, Willie Obiano and the university management for their support, said that there were still areas where the college needs assistance.

He mentioned inadequate academic staff, vehicles, movement of pre-clinical faculty to Awka and medical students’ bus and inadequate funding of the college as some of the university’s major challenges.

Administering Oath to the new doctors, the Registrar, Medical and Dental Council of Nigeria (MDCAN, Dr T. B. Samurai, said that doctors’ had a dilemma of keeping to their oath of saving lives and respect for the patients.

He said doctors and spiritual leaders were equally important to the patients because of their role in the total wellbeing of his body, soul and spirit.

He called for a review of the ethics of medical practice and a new policy that would unify the practitioners to ‘evolve a holistic healthcare system’ that guarantees the total healing.

He also urged the Federal government to employed more doctors for effective healthcare service delivery across the country.

The Vice-Chancellor of COOU, Prof. Greg Nwakoby, in his congratulating message to the new medical doctors, advised them against cutting corners or engaging in getting rich quick approach in their practice.

Nwakoby, who was represented by Prof. Frank Akpuaka, the pioneer Provost of the College, urged parents to be patient with the young doctors and not to expect so much from them, saying that they still had a long way to go.

The newly elected Provost of the College Prof. Emmanuel Chukwuemeka Ojiyi, on his part, said the state government would assist the doctors as they move to the next phase of their career.

He said COOUTH was being equipped with modern state of the art diagnostics equipment and that those who would do their House manship and Residency in the place would have the benefit of being exposed to the machines.

Dr Chris Ngige, in his brief speech at the ceremony, while giving 250,000 to the best graduating student, assure them of providing spaces for their horsemanship to enable them to excel in the profession.

An APC chieftain, Chief Johnbosco Onunkwo and Dr Nwachukwu Ameachi while congratulating the doctors, charged them to be worthy ambassadors of the college, their teachers and parents who contributed in no small measure to their successes.

The best graduating student, Dr Agulefo Uzochukwu, who won some awards, for 2020 set of the Medical College, urged his colleagues to practice with dignity and truth to make their parents, guardians and Nigeria as whole proud.