Ogoga pushes Ikere development to the doorstep of FG 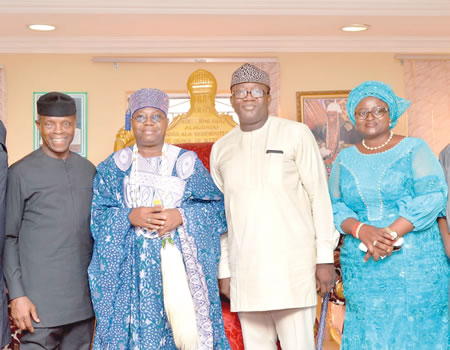 The paramount ruler of Ikere in Ekiti State, the Ogoga of Ikere, Oba Samuel Adejimi Adu, will not relent in his quest to continually bring development to his domain. The foremost traditional ruler has routinely made demands of government and its development partners, to see Ikere-Ekiti as a major gateway town which it is and offer it its rightful place in the list of government priorities for development and patronage.

In line with this, the first class ruler recently placed Ikere-Ekiti once again on the front burner when he received the Vice President of Nigeria, Professor Yemi Osinbajo. Osinbajo had paid the Ogoga a courtesy visit during his short stay in Ekiti State preparatory to the recently-concluded presidential election.

The visit was momentous for both Ikere community and the Federal Government as represented by Professor Osinbajo because it was an opportunity for Ikere to lay the problems bedevilling it and its quest for rapid development before the powers that be and as well get the government’s response. And Oba Adejimi Adu utilised the opportunity presented by the visit to push forward the many things he believed are most necessary for the welfare and development of the town.

For instance, the traditional ruler said it was time the Federal Government established a federal university of education in Ikere-Ekiti. He held that the community was due for the establishment of a federal institution. He said in support of his demand that the town had the highest number of professors in Ekiti State and contended that a way to boost that status was for the Federal Government to establish a university of education there.

The Ogoga said: “We have the highest number of professors in Ekiti  State. Over 110 professors are from this community, and in addition, we have several medical doctors and other professionals. We have five Senior Advocates of Nigeria (SAN), the highest in this area. We are indeed the second largest town in Ekiti. Therefore, we deserve a federal institution.”

Apart from the call for a federal university of education to be established in Ikere, Oba Adejimi Adu also explained that the roads in and around the town were of importance to its development and called for their enhancement. He lamented the state of the federal road linking the town with the Ondo State capital and called for its urgent rehabilitation.

He said the Ikere – Akure road “is crucial for commercial and related activities for the fact that the road connects Ondo and Ekiti states,” pointing out that this “makes it crucial for inter-state development.”

It was also an auspicious occasion for the traditional ruler to call on the Federal Government to fund the Ogbese Dam water project located at the boundary area between Ikere and lse-Ekiti community in Ise/Orun Local Government Area. He said the call became imperative because, according to him, the budget for the project was announced to have been approved last year.

Further to these, the Ogoga called for the proper monitoring of approved contracts, saying the town was playing its role in this regard by ensuring the security of the government property in his domain. As an example, Oba Adejimi Adu alleged that there was vandalism and stealing of property of the Benin/Owena River Basin Development Authority, and reported the incident to Vice President Osinbajo.

“It is disheartening that equipment meant to serve the agricultural needs of our people have been removed from the facility and taken away. The multimillion naira poultry facility there has been stripped and taken to  the hometown of the current Managing Director of the river basin authority,” Oba Adejimi Adu alleged.

He noted that “a huge amount had been spent on this project. We pray that your government assist us in reviving this massive project which is capable of being a motivator of the economic development of Ekiti State in agriculture and power sectors.”

Earlier in his address, Vice President Osinbajo had enjoined lkere  residents to support the administration of President Mohammed Buhari, saying his administration had achieved so much in its first term.

Professor Osinbajo listed the Buhari’s administrations achievements to include “improved power supply, youth  empowerment, provision of basic infrastructure across the country,” and promised that it would consolidate on these and even achieve more going forward.

Present at the event were the state governor, Dr Kayode Fayemi, a former commissioner in the state, Mr. Tunde Fakoyede; wife of the monarch, Funmilola Ololade and members of the Ogoga-in-Council led by its head, the Sapetu of lkere, Professor Olufemi Babatola, among others.

Thumbs down for INEC