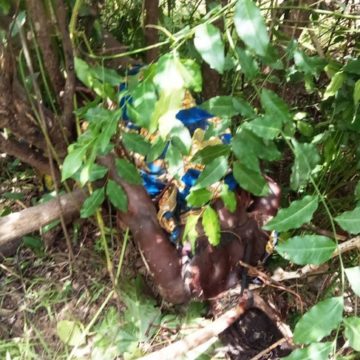 Kwara State Command of the Nigeria Security and Civil Defence Corps (NSCDC) has arrested four suspects in Esie and Ijan towns in the Irepodun local government area of the state for allegedly raping and killing a middle-aged woman.

A statement by the state Public Relations Officer of NSCDC, Babawale Afolabi, said that an officer of the civil defence corps, Babatunde Azeez, on April 2, 2021, at about 5:00 am received a complaint from the Secretary, Fulani/Bororo in Esie and Ijan region, Alhaji Musa Waziri, of a missing woman, Aishat Sanni.

“The missing woman’s corpse was later discovered in the bush and four suspects were arrested in connection with the murder of the woman by the search team of NSCDC, vigilante and the Nigeria Police,” the corps said.

The corps, which said that the statement of the four suspects, taken after due security fact-findings, linked the arrested people to the death of the young woman.

“Having carried out investigations on the above fact findings, the following facts emerged; That the deceased, Aishat Sanni was declared missing on 02/04/2021 by Alhaji Musa Waziri and a report was made to the office of NSCDC, Esie/Ijan outpost.

“That three out of the suspects namely Rasaq Rasheed, Lukman Quadri and Biliaminu Qoyum, confirmed in the statements that the prime suspect, Sodiq Adams, arrested a Bororo woman for allegedly stealing cashew nuts but later escaped.

“That investigation revealed that Sodiq Adam’s convinced the other three suspects to run after the second Bororo woman who ran away so that he can have canal knowledge of the one arrested.

“That in the process of trying to rape the deceased, he was bitten in the left arm and bruises on his neck inflicted by the late Aishat.”

The investigation further revealed that the other victim that escaped, when asked about the whereabouts of the deceased, confirmed that the deceased was captured by the prime suspect, Sodiq Adams.

The NSCDC spokesperson also said that the case had been transferred to the Nigeria Police, adding that Police is in charge of homicide cases.

In spite of the huge investment in the water sector by the government and international organisations, water scarcity has grown to become a perennial nightmare for residents of Abeokuta, the Ogun State capital. This report x-rays the lives and experiences of residents in getting clean, potable and affordable water amidst the surge of COVID-19 cases in the state. NSCDC nabs four in Kwara for rape, murder