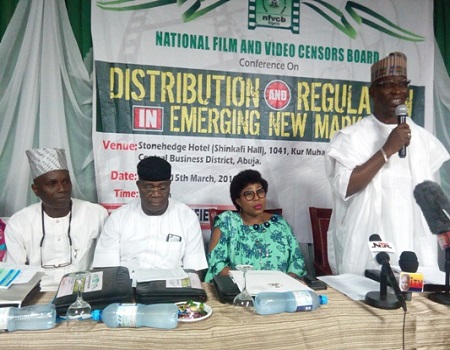 Mr Adedayo Thomas, Executive Director of National Film and Video Censors Board (NFVCB), on Friday, said the board was set to introduce authentication labels to curb distribution of unclassified and pirated films and videos.

Thomas disclosed this while delivering a speech at a conference on Film and Video Distribution and Regulation in Emerging New Markets organised by NFVCB in Abuja.

The one-day event with the theme, “Institutional Collaboration to Improve Standards”, brought together filmmakers, distributors, relevant government functionaries, investors and members of the various guilds in the Nigerian movie industry.

According to Thomas, there were emerging trends in film and video distribution which has necessitated the board to initiate measures including introduction of the authentication label in line with global best practices.

“The NFVCB is in the process of acquiring film/video authentication labels which are meant to distinguish film and video work that is classified by the board from the ones that are not classified and approved.

“It will have several security features which cannot be forged or manipulated, which will aid the board to reduce the incidents of piracy to a large extent.

“When a film is classified and approved, the owner or distributor will apply for the authentication label for the number of copies to be replicated as ascertained by the NFVCB.

“We, therefore, need the buy-in of all stakeholders on this laudable project which hopefully will clear the market of unclassified, unapproved and of course, pirated films/videos,” he said.

Thomas explained that NFVCB, in its effort to serving the fast-growing Nigerian film and video industry better, has drastically reduced the period it takes to censor and classify a film.

He added that the board was also working towards changing her certificates and licenses by printing a new set of the documents with special security features to make them difficult to forge.

“We now censor and classify a film within one week of submission, and this is a huge positive deviation from the past when it took almost three months.

“The change of certificate is necessary because, over the years, we have had many incidents of forgery of these documents.

“We hope to deliver this by the end of the second quarter of the year, all in our efforts at ensuring that the market is rid of all unclassified and unapproved films and video works.

“All distributors of such unwholesome works will be dealt with in accordance with the law because Nigerian filmmakers need to get rewards for their hard work,” he added.

In her address, Mrs Grace Gekpe, Permanent Secretary, Federal Ministry of Information and Culture, commended the NFVCB for organising the conference, adding that stakeholders needed to cooperate with the board towards strengthening the industry.

“Movie business or any business for that matter thrives in an atmosphere of strict compliance to laid rules or regulations governing the operations of such business.

“The NFVCB was set up specifically to regulate the film and video business in Nigeria, it is, therefore, an offence to distribute a movie that has not been classified and approved by the board.”

NAN reports that the NFVCB is a Federal Government body that regulates the films and video industry in Nigeria.

The Board is empowered by law to classify all films and videos, whether imported or produced locally.

It is also the duty of the Board to register all films and videos outlet across the country, as well as keep a register of such registered outlets, among other functions.