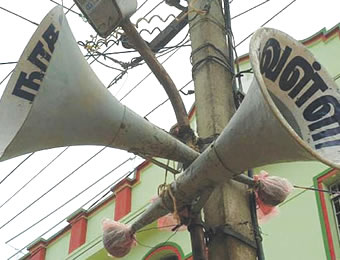 RECENTLY, in an apparent move to enforce  compliance with the extant law on noise pollution in Lagos State, the Ministry of Environment and Lagos State Environmental Protection Agency (LASEPA) went after some perpetrators of dangerous and intolerable noise levels in the state. By the time that assignment was completed, 70 churches, 20 mosques and 11 hotels, club houses and beer parlours were sealed off for running afoul of the law.  However, the ensuing controversy was very unsettling. The controversy was not hinged on the ignorance of the law, which could not have been an excuse anyway, but on allegedly selective and biased implementation of the law. The relative number of worship centres affected in the clamp down were showcased to buttress a trivial case of partiality.

It would appear that it is being suggested that notwithstanding the disparity in the levels of compliance with the law on noise pollution, there should be parity in the number of worship centres of Muslims and Christians sanctioned. Sadly, the infraction of the law by organisations which are supposed to be exemplary in guiding their members to be law-abiding became secondary.  This, unfortunately, is a very dangerous trend that is fast gaining currency in the land today.

The Lagos State government is urged to continue its commendable pursuit of a noise-free Lagos by 2020. It should not succumb to blackmail by any individuals or organisations that are only interested in feathering their nests under the guise of serving God. Service of God under the Christian or Islamic faith should not imply noise making and constituting a nuisance to other people. There is no scriptural support for this. Solemnnity and sobriety in the conduct of services are even advised. Yet there are pervasive worship centres in residential areas in many cities in the country competing for noise making with blaring speakers and horn speakers mounted on their roof tops and or the fences. That is unacceptable.

Freedom of worship cannot possibly include acts that constitute health hazards to others. What is the objective of using musical instruments that could be heard half a kilometre away in churches or mosques?  If it is to woo potential members/adherents, it is a wrong-headed strategy. Any noise level that is above the recommended 55 decibels during the day and the 45 decibels at night should be regarded as being purposely created to disturb and cause harm.

The productivity of the average Nigerian worker is already low, and that situation can only be aggravated if hearing impairment occasioned by prolonged or frequent exposure to dangerous noise levels is added to other factors. We  therefore  urge  that, rather than waver in the enforcement of the anti-noise pollution law, LASEPA should try to expand its scope and coverage. While religious worship centres that arguably created more noise nuisance particularly at odd hours could be the main focus, enforcement of compliance should be intensified at social gatherings where intolerable levels of noise are perpetrated. Social clubs in particular are known to release much noise through their loud speakers mounted strategically within communities to woo more patrons. Hotels and beer parlours, especially those that employ the services of disc jockeys that play from night till dawn, should come under the radar.

In addition, busy interstate motor parks in the city where blaring loud speakers unceasingly announce the destinations of vehicles should be covered. Mobile salesmen that  mount blaring horn speakers on their  vans should no longer have a field day.  Experts have posited that the human ear is designed to process naturally occurring sounds but not well equipped to handle the high noise levels that are common today because such loud sounds seldom occur in nature. It should be stressed, therefore, that today’s advances in science and technology will not become a curse to humanity only if moderation is exercised in the use of its products.

Overall, the Lagos State government is on the right path with the new policy and this example is highly recommended to other states of the Federation where noise levels that are not environment-friendly still prevail.

Still on the turmoil in God’s own state

The Oyo State law on pollution