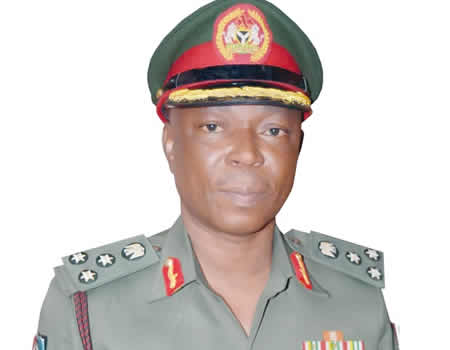 The Director Army Public Relations, Brigadier General Onyema Nwachukwu, on Wednesday, formally assumed duty with a passionate plea for Media support in the enormous task ahead of him

Speaking at the short ceremony of the formal handing and taking over ceremony of the Directorate of Army Public Relations, Army Headquarters, Abuja, he stated that the complex nature of security challenges being experienced in the country required a multi-disciplinary approach and the role of the media as stakeholders was a very vital one.

He pointed out that to surmount these challenges, the Nigeria Army and the media must be partners in progress in order to berth the peace and tranquillity desire as a people and as a nation.

The new Army Director said he remained eternally grateful to God while appreciating the Chief of Army Staff, Major General Faruk Yahaya for his appointment and the Chief of Defence Staff, General Lucky Irabor for his encouragement during his tour of duty as the immediate past Acting Director Defence Information.

According to him, “I have no doubt, in my mind of the responsibilities of my office as the Director Army Public Relations, which is summarily to project the activities of the Nigerian Army with the objective of galvanizing public goodwill and support for the Nigerian Army as its strives assiduously to surmount contemporary security challenges bedevilling our nation

“Permit me to note here, that it is an indisputable and very well established fact, that the sword or gun cannot alone, provide a panacea to the complex and multifaceted security challenges that characterise today’s world

“I must recognise the immense contributions of my boss, the immediate past Director Army Public Relations, Brigadier General MM Yerima. Sir, on behalf of officers, soldiers and civilian staff of the Directorate of Army Public Relations, I will like to appreciate you for the laudable feats recorded during your tenure.

“May I also assure you that I intend to consolidate on your successes. Please be rest assured that we will often times consult with you to seek your professional guidance as a seasoned Public Relations practitioner.”

On his part, Brigadier General Yerima, was full of appreciation to the Late Chief of Army Staff, Lieutenant General Ibrahim Attahiru for the opportunity to serve as the Director Army Public Relations, and the staff and officers for their support while requesting that the same cooperation that was given him be accorded to the new director, whom he extols as a fine public relations practitioner.