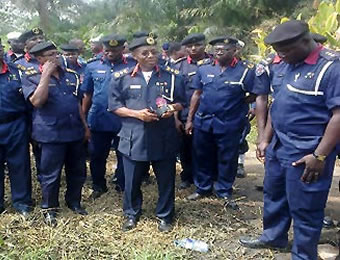 OPERATIVES of the Nigerian Security and Civil Defence Corps (NSCDC) have said they will replicate what they have been doing to protect Oil and Gas pipelines nationwide for the telecommunications sector if the Nigerian Communications Commission (NCC) provides the opportunity for them to do so.

This was the declaration of the Acting Deputy Commandant General (Protection of Critical Infrastructure) Mr Amos Andekein when he led a delegation of NSCDC to the NCC in Abuja, recently.

Hosted by NCC Executive Commissioner (Stakeholders Management) Mr Sunday Dare at the NCC Headquarters in Abuja, on behalf of the Executive Vice Chairman (EVC), Professor Umar Danbatta, the meeting was a follow up to the one hosted by the National Security Adviser (NSA) Major General Babagana Monguno (rtd) in December, 2016.

The meeting was specifically called by the NSA for both agencies to deliberate on workable ways to protect critical national infrastructure.

“This is a follow up to that meeting,” Dare told the visiting NSCDC team.

He said it is in line with that meeting that NCC wants to work with the NSCDC on ways to protect critical national infrastructure, like Base Stations, Optic Fibre, Masts and nip in the bud activities of those trading in pre-registered Subscribers Identification Module (SIM) cards and the security implications of vandalisation of telecom equipment among others.

He said although the NSCDC men have been manning NCC Emergency Communications Centres (ECC), before now, but that “we are sure that you will support us in the protection of the critical infrastructure on the directive of the NSA”, Dare, who led the NCC team including Director, Public Affairs, Mr Tony Ojobo observed.

Andekein explained that protection of critical national infrastructure was part of the NSCDC core mandate as enshrined in its Act and “we are willing to do just that for the telecommunications sector like we have been doing for the Oil and Gas Sector; Oil Pipelines and Maritime Operations.”

He explained, however, that it will require a lot of enlightenment for people to know the dangers of vandalisation of telecom equipment and the laws against it.

In his contribution, Head, Compliance Monitoring and Enforcement, Mr Efosa Idehen said: “for us at NCC, our job is done when criminal activities cease to exist. But Operators have not followed the guidelines as when they should hence enforcement for compliance.”

He said NCC has embarked on the sensitisation of the Police and other security agencies on the workings of the guidelines and regulations and the implication of non-compliance by operators.

“Sadly, arrests have been made in the past but prosecution has not been pursued to the letter,” he said.

He Pleaded with the NSCDC to enforce the law, arrest offenders and prosecute them.

Head, Legal and Regulatory Services (NCC), Mrs Yetunde Akinloye said the laws were being fine-tuned with a view to having successful prosecution of defaulters.

“A private member bill is in the offing and when passed, prosecution will be a lot easier,” Akinloye added.