•Why Nigerians are facing identity crisis

Till date most Nigerians have not been able to complete their National identity card registration, citing several obstacles. TADE MAKINDE, SUBAIR MOHAMMED and IMOLEAYO OYEDEYI highlight the hassles Nigerians go through in the process and the problems associated with multiple national identification registrations. 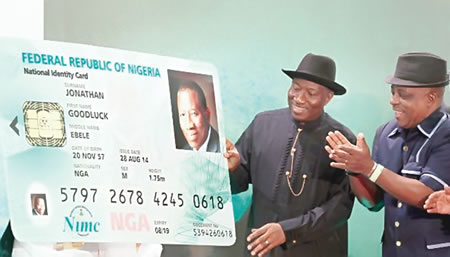 MARVEY Onomroba is a professional cartoonist and former staff of Tell Magazine. As a creative artist, he now works for Cartoon XpressionXtra, an animation and illustration company based in Lagos. Earlier in January, as part of efforts to enrol him for pension entitlements, his employer asked him to visit the company’s bank for necessary registration.

With him on his way to the bank was his Permanent Voter Card (PVC) and Bank Verification Number (BVN) card. On getting to the bank, he was shocked when a bank official told him he had to get his National Identity Number (NIN) before the transaction could be done.

His mind immediately flashed back to the horrible experience he had while registering to obtain his voter card, an experience which he wasn’t prepared to go through again. He wondered why the bank insisted on his NIN when he had his voter registration card which was a national identification item.

Having met a brick wall he had to visit an NIMC centre for registration. Predictably, his experience was harrowing before he was able to get the NIN.

“What I went through after bribing a worker of NIMC with N4,000 last month just to get the number was not a good experience. I gave out the bribe because I needed it done immediately, so that I could go back to the office. But I ended up spending the whole day with them at Ikeja Local Government amidst tension, despite the bribe which was meant to ease my way.

“It was a dreadful experience. I faced the same thing during the voter card and BVN registration. Why are we so disorganised in this country? Why must I have to go and queue again at the NIMC office for the same personal profile which was taken during the voters’ registration?

“I believe that what should have been done was just to use the PVC or BVN data to get the needed data and not allow Nigerians go through the horrific ordeal all over again. Why can’t we even have a single identity verification card or system instead of the multiple cards and pin?” he lamented.

Onomroba’s experience was not different from that of most Nigerians, making them to wander why a national registration process should be so agonising and severally done instead of using the data on one platform for subsequent ones that may be needed.

Having a national database for Nigerians was not a recent attempt. In September 2018, the Federal Government of Nigeria, as a demonstration of its commitment to put in place a formidable identity management system, approved the immediate commencement of the implementation of a strategic roadmap for Digital Identity Ecosystem in Nigeria; necessitating full compliance with the NIN Mandatory Use Regulations.

According to findings, ‘“the NIMC, which replaced the defunct Department of National Civic Registration, was required to carry out the registration of all registerable persons in Nigeria and thereafter issue a General Multipurpose Identity Card (“National Identity Card”) to each registered person.”

However, the apparent failure of the system coupled with the consistent pains that Nigerian go through during the registration exercises informed the call for a single identity registration card and platform in place of the multiple systems.

Corroborating Onomroba’s call for an end to the tale of woes that Nigerians go through, a non-teaching staff of Adekunle Ajasin University, Akungba-Akoko (AAUA), Oluwaseyi Oluwalade, who is also a broadcaster with the varsity’s radio station, believes that a centralised unified card system is the solution to the myriads of problems.

“For me, having a well-designed unified national registration platform in place is the way to go. The extant NIN programme is not effective let alone being efficient. I have been on it for about two years, yet, I have not been issued a card. The government should look inwardly and give us a very robust option. Nigerians deserve the best,” Oluwalade said.

Akindele Olubayo, a technology expert and communicator told Sunday Tribune: “Does Nigeria have the required database in terms of the machinery to bring the unified national registration platform to fruition? Do we even have the required computerised parameters to make the system run efficiently?

“Until we address our infrastructural and systemic deficiency in terms of technology and database, having a unified identity system, which is central to the development of every economy, it will continue to be a mirage.”

According to Banwo-Igbodalo.com, an online resource centre, “an effective national identity management system provides a universal identification infrastructure for a country that enables access and means to confirm the identity of individuals residing in the country.

“Thus, proper economic planning, adequate intelligence gathering and functioning internal and external security architecture will be difficult to achieve in the absence of a robust national identity system (which is usually comprised in a central identity repository or database).”

Olagbenro Taiwo, CEO of Lead Innovations & Strategies, Surulere, Lagos, responding to the question on why it has been difficult to centralise data gathering in Nigeria, said the major reason was because of some challenges facing those saddled with the responsibility of producing the identity cards, especially with regards to adequate funding and a definite plan of action.

He was, however, sure that resolving the challenges and adequately funding the process will ensure collection of accurate data whereby a unique security number will be generated for every citizen.

“We know that these systems are already implemented and working in many countries around the world. You ask yourself, what is difficult in implementing a functional system? Even in Nigeria, many private institutions are doing well with this kind of system.

“So, the problem is not a question of technical knowhow because that abounds. But successive governments either lacked the will power or the technical vision or some interest will be gored when such system is implemented because a lot of twisted hidden truths will become open to all,” he said.

Taiwo asserted that huge cost of maintenance and building a robust server to house the data were the bane of having a reliable database in Nigeria, aside the fact that cheaply constructed servers are easy targets for hackers and cyber-attacks, He also blamed lack of synergy between all the registering organs for the chaos.

“Most of them usually request for the same data such as: names, fingerprints, address, picture, age, etc, which can be drawn from a national database, if available. This will solve a lot of issues at the touch of a button anywhere within the country,” Taiwo said.

Both Taiwo and Sanya, however, agreed that multiple data gathering can encourage fraud and other impunities such as registering as a voter both in Oyo and Osun states thus duplicating the registration and committing electoral fraud. They also agreed that criminal records cannot be properly maintained in such a situation.

For Mr Pedro Ayandokun, a renowned criminologist, multiple biometric capturing is a deliberate opportunity given to Nigerians by the Federal Government to engage in fraudulent activities.

According to him, there was no need for multiple registrations, arguing that it amounts to waste of time and resources. While urging the government both at the federal and state levels to scrap other forms of identity registrations, Ayandokun noted that the yet-to-be-issued national identity card was enough to prove ones identity.

“In spite of the stress many Nigerians face daily to get captured, the national identity card remains the only viable means of identification for Nigerians,” he said, noting that “it is unfortunate that many Nigerians are compelled to do multiple biometric capturing to fit into the system. But the fact of the matter is that we don’t need the INEC card, LASRRA and the Immigration passport to prove one’s identity.

“If the national identity card is required for the purpose of identification, why do we need other biometric capturing as Nigerians? If not for dubious activities, why must an individual have several identity cards?

“It is not the country that bears the financial brunt, it’s the individual that pays for each of these cards and spends days and weeks at the registration centres thereby wasting productive hours. Why do I have to get a national identity, passport and a driver’s licence and these attract a cost, it is wrong,” he said.

In a similar vein, a security expert, Patrick Agbamu opined that to curb insecurity, Nigeria needs a single biometric record. While arguing that multiple biometric capturing do not pose any security threat, he said, it could fraudulently be used.

“Having multiple biometric capturing doesn’t come as a security threat to any individual but it’s better to have a single biometric data base. Nigeria not having a central data base could be likened to the country not having records of her citizens. The implication of this is that it will be difficult to identify who-is-who, especially now that the country is battling terrorism and insurgents.

“The country needs to have a crime data base. Biometric should be captured as lack of data capturing is one of the major factors affecting security in Nigeria. Until we get it harmonised and done better, security challenges will be there but that is not to say that those countries that have a data base don’t have security challenges too,” he said.

Persecution of Christians is uniting churches in Nigeria faster —Adetunmobi