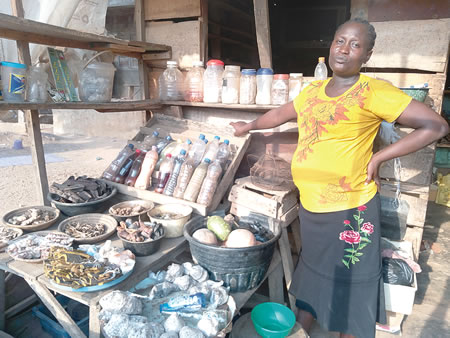 Herbal medicine permeates all of Africa, but agbo, a Yoruba word that describes a concoction of plant parts – bark, root, trunk, leaves – steeped or boiled in alcohol or water is shifting from its Yoruba origins.  And like plants, it is everywhere.

Agbo is natural; there is no doubt about it. And no matter the quantity of medicines, many people still never feel better until they “crown it” with herbal medicine, and that’s mostly for typhoid or malaria. But, taking a combination of HIV medications with agbo that contains scent leaves (efirin) for malaria, typhoid fever, pile or other infections is best avoided.

Experts, in a new study, suggest that combining agbo prepared with such plants like bitter leaves (ewuro), scent leaves (efirin) with zidovudine, lamivudine and nevirapine (ZLN), a combination of highly active antiretroviral therapy used in the treatment of HIV, will lower the effectiveness of these ARV medications.

Many people living with HIV/AIDS (PLWHA) use traditional medicines to supplement dietary intake of nutrients, to boost energy levels, to alleviate side effects of antiretroviral therapy (ART), to cure opportunistic infections like malaria and to boost immune response.

This study included 60 herbalists from five different communities and 300 HIV/AIDS patients attending highly active antiretroviral therapy (HAART) clinic at the University of Ilorin Teaching Hospital (UITH) Ilorin to obtain information on types of herbs used in the management of HIV/AIDS between September 2016 and February 2017.

A total of 23 plants were validated for use in the management of HIV infection by the herbalists and HIV-infected persons. Common plant parts used for the concoction were leaves (33.4 per cent barks (26.7 per cent), roots (16.7 per cent), and seeds (13.3 per cent). Scent leaf had the highest familiarity index of 43 per cent.

None of the patients took any other drug for at least two weeks before the commencement of the study and no other drug was allowed during the study period. They were also monitored to ensure adherence to the study protocol. The level of the ZLN in their blood samples in both groups was later assessed.

There was a reduction in the blood concentration of nevirapine in individuals that concurrently used scent leaf extract and ARV as against those that used ARVs alone, suggesting that individuals on the simultaneous use of these medications may experience ARVs drug treatment failure.