Ministry of Budget and Economic Planning to collaborate with NIPR 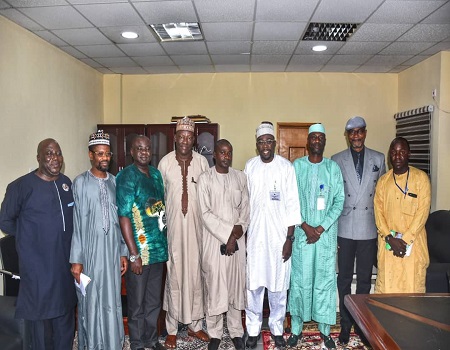 In order to ensure effective and pragmatic budget administration in the state to meet the needs and yearnings of the populace, Bauchi State Ministry of Budget and Economic Planning has expressed readiness to work in synergy with the State Chapter of Nigeria Institute of Public Relations (NIPR)

This was expressed by the Commissioner in charge of the Ministry,  Dr Aminu Hassan Gamawa when he received in audience, officials of the State chapter of Institute who paid him a courtesy visit in his office on Tuesday.

Aminu Gamawa said that the need for collaboration between the two bodies cannot be overemphasised, as government needs all the support and collaboration from relevant stakeholders in the state in order to be able to deliver its Electoral promises.

According to him, NIPR has a vital role to play in assisting the Ministry to ensure transparency and accountability in the management of scarce resources as well as in the budget process.

He insisted that “the money called government money is for the public as the government would be accountable both directly or indirectly in view of the fact that is people that give them the mandate through elections”.

He added, ” First of all. I am very honoured today that you decided to visit me, I hardly turn down courtesy visits because I know it is an opportunity to build network and relationships. Anybody not only interested but alive knows the importance of Public Relations and the roles they as experts in public relations management”.

The Commissioner expressed confidence that partnership between the NIPR and the Ministry will attract more donor to invest in the state and assured that his doors will remain open for better performance.

On the appointment of the chapter’s Public Relations Officer, Muslim Lawal, as his Personal Assistant on Media, Aminu Gamawa described it as well deserved because according to him, the appointee is qualified to hold the office.

The Commissioner said, ” I don’t think there is a need for you to thank me for appointing Muslim Lawal, he deserved it, just encourage him to do more where he can move from my own level to the highest level. I know the importance of your organisation and the profession you represent. Is only in Nigeria, in the United States of America I discovered that apart from lawyers, another respected profession is Public Relations”.

On his part, a member of the Elders Advisory Committee of the Institute, Dr Andee Iheme described the commissioner’s appointment as not based on politics but based on credentials

Andee Iheme added that “Your appointment was not based on politics, your credentials went before you. it is a huge sacrifice for you to accept the offer and I am confident that Bauchi state one day its son with global experience will take over the leadership of the state”.

Earlier, the State Chapter Chairman, NIPR Chairman, Alhaji Kabir Ali Kobi appealed to the Commissioner to use his experience, expertise and connections for the development of the state.

” The Honourable Commissioner Sir, we are equally here to thank you most sincerely for appointing our own, the chapter’s PRO, Muslim Lawal as your Personal Assistant in charge of Media. Let me assure you that Muslim Lawal, is hardworking, honest, loyal and proven integrity”, he further appealed.

Ali Kobi further said that apart from thanking him for the appointment, the visit will give an opportunity for the Institute to strengthen its relationship with the Ministry.

He said NIPR being a professional body, will support the Ministry to overcome the challenges affecting the administration of budget and other identified areas.