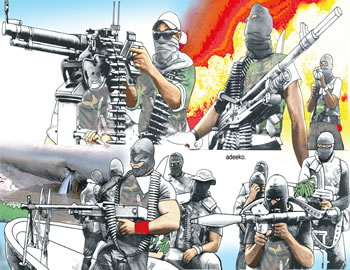 Two Thursdays ago will go down in the lives of many residents of Ogun and parts of Lagos state as a very black Thursday that they would never forget. No fewer than 20 persons were reportedly killed after suspected militants invaded some villages in Imushin, a boundary community between Lagos and Ogun States.

The affected villages include Oke Muti, Elepete, Ajegunle, Ola Imam, Ereko junction, Igbo Olomu, Pakisa and Magbon. The ensuing carnage led to the desertion of a total of 18 villages making up Imushin. There are two versions of the cause of the trouble and different figures of casualties depending on who is giving the details. According to one source, trouble started at about 10p.m. that Thursday when unknown gunmen opened fire on a group of vigilantes in Ola Imam located in one of the communities. Seven of the men were said to have died on the spot. An eyewitness, who lives in one of the communities, told reporters that a large number of the victims were landlords. Due to incessant armed robbery attacks in the community, landlords were said to have mobilised themselves, formed a vigilance group and had made bonfires at strategic points and were on foot patrol when the militants swooped on them.

Another version, however, says the whole problem started after some SARS officers, who were acting on a tip-off, stormed a hotel in Elepete called Top-Catt Hotel. “The officers killed two of the militants, carried away their corpses and arrested the female owner of the hotel. One of those killed was an engineer who worked for the militants. The militants claimed he was unarmed and innocent and they demanded that the police should release the two corpses.

“When they couldn’t get the corpses, they decided that they would kill 110 people in revenge. They killed 15 people the night the two people were killed and now, they have killed more people.”

Are these really militants? The word militant suggests a civilian group taking up arms against constituted authority (government) to right some perceived wrongs where dialogue has failed to work.  As a commentator said and I quote, “these are definitely not Ijaws. The Ijaws don’t kill innocent people without being provoked. And if they do they own up and do not shroud it in mystery. The Ijaws fight only a just war that’s why it is difficult for any ethnic group or even the Nigerian soldiers to withstand the Ijaw Warriors. We are not cowards that kill people and run away. During the Obasanjo era, on several occasions, the Ijaw Warriors sent messages to various army checkpoints informing them that they were coming to attack on a particular date and they kept to it and flushed out the military. How then would such a people attack some defenceless Yoruba, we know the Yoruba are only gifted in talking but that will not make the Ijaws to go and kill innocent people. Rather they will confront and wipe out the OPC militant group.” Boastful, one would say; but he might be right.

Having read this treatise, I was left wondering: was the attack planned to create problems between the Yoruba and the Ijaw? Could the attackers indeed be the notorious herdsmen causing havoc as they have done in the South-East? Reports have it that these attackers used the hour of the night to unleash mayhem on defenceless and innocent people. This looks very much like their modus operandi – attack at night without warning. Or would these agents of Satan be armed robbers? But why would robbers behead innocent people?

Whoever these people are, the incident is a confirmation of what all Nigerians have always known and feared. Nowhere is safe and no one is safe, what with all the guns and ammunition all over the place.

Re – This is disgraceful

The Americans have made it clear beyond any reasonable doubt, that there is no hiding place for philanderers in their land. The shameful behaviour and loathsome attitudes of these three lawmakers made me classify our lawmakers into two categories. The first category is made up of members of the house. These are those who know the laws of the land and respect it, while the second category is made up of those I would call tenants in the house. These are those who know the law but trample upon it. I must admit that when I look at most of Nigeria’s politicians, it is only their back view that projects them as political leaders; the remaining parts of their bodies suggest other characteristics – political robbers, political brutes and political philanderers. Indeed, I would rather look at and derive satisfaction from the statue of the late leader Chief Obafemi Awolowo; this is more preferable for me than interacting with looking the present-day politicians who are still well and alive but have nothing positive for this country. Finally, we need a strong alibi from each of these law breakers to in order for them to exonerate themselves. Oh, they have indeed disgraced our great nation.

‘Christians must prepare for the end times now’

PDP: From temporary to deeper coma