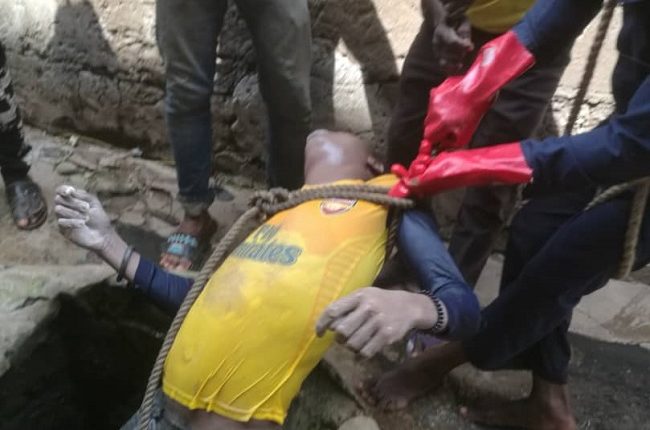 Officers and men of the Nigeria Security and Civil Defence Corps (NSCDC) in Kwara State have commenced investigation into death of a young man who reportedly died inside a domestic well in Offa, Offa Local Government Area of the state on Tuesday.

The Tribune Online gathered that residents of Ajao Street, Owode Market, Offa had discovered that one Abubakar Sokoto was trapped inside the well and called attention of the fire men.

However, according to the head, media and publicity of the Kwara State fire service, Hassan Adekunle, the young man was brought out of the well dead by the men who carried out the rescue operation.

The deceased, said to be in his 20s, dressed in jersey wear and jeans, had his phone in his trousers’ pocket.

“Men of the Offa Fire Station under Kwara State Fire Service had carried out a “Rescue Operation,” Tuesday morning.

“The incident occurred around 11:25hrs at Ajao Street Owode Market, Offa. After the people in the neighborhoods had discovered that there was a person trapped inside their domestic well.

“They quickly summoned Offa Fire Station and thankfully we arrived promptly at the scene exactly five minutes after the turn out call.”

“However, immediately we got to the scene, we fully engaged. And within some couple of minutes, we were able to recover the casualty dead and handed over to one officer Danfulani from Nigeria Security and Civil Defence Corps of “E” Command, Offa.

“Based on information gathered at the scene, the victim’s name was Abubakar Sokoto.”

Value of crises for any national economic system

NSCDC to train 3,000 teachers on security, safety skills in Ogun