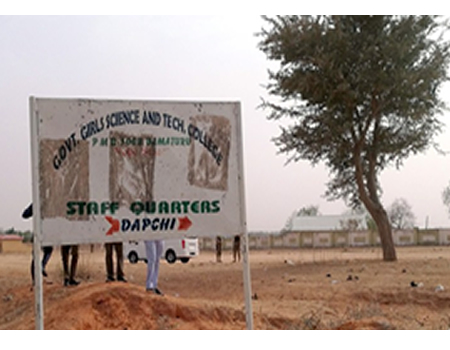 The kidnapping of over 105 school girls in Dapchi, Yobe State last week has put to rest the much acclaimed or celebrated success in the war against Boko Haram in the country. The insurgents successfully gained entrance and forced the students into their lorry and conveyed them to an unknown destination. The unlucky victims, like their Chibok counterparts, will be forcibly married out, sexually exploited, covered up to get ransom or used as suicide bombers by the Boko Haram members.

The news of the abduction began with conflicted narrative from the Yobe State government; the state government admitted that Dapchi schoolgirls were actually abducted by the Boko Haram but rescued through the efforts of soldiers during operation and re-united with their families. It later refuted the story after it found out the students are nowhere to be found.

For the Federal Government, the story seemed cooked up until when it sent representatives on a fact-finding mission. The delegation, led by the Minister of Information, Culture and Tourism, Lai Mohammed, was briefed on how the unfortunate abduction was carried out. Governor Ibrahim Geidam expressed his displeasure at the security laxity and blamed the withdrawal of troops one week before the raid.

The governor further stated how his administration spent N15 billion on war against terrorism in the state within the last three years. What worried many Nigerians is the time and speed with which the deadly group struck and carried out the abduction. It will be recalled that the abduction came at a time that the Federal Government was busy trying to free the Chibok school girls who have been in Boko Haram captivity for the past four years.

The Dapchi abduction will unarguably throw a spanner in the wheel of genuine desire to discover and free the remaining Chibok girls. The government is now faced with two interwoven scenarios that require similar solutions. First, it has to relentlessly pursue the discovery of the remaining Chibok girls, second, the government should as a matter of urgency intensify surveillance to fully free the over 105 students kidnapped by the Boko Haram. The politicisation of the Chibok girls’ abduction by the last administration should not be allowed to repeat itself. In the wake of the disappearance of the Chibok girls, the then administration felt the incident was stage managed to ridicule the government of the day. The government blamed opposition party; it took many days and efforts by the Bring Back Our Girls conveners to convince the government on the seriousness of the matter.

The human rights activists and similar organisations should spring up and put government on its toes. the Bring Back Our Girls campaign organisation has assisted greatly towards mounting pressure on the government to hasten or facilitate the release of the Chibok girls. Through the effort of Aisha Yousuf, Oby Ezekwesili and others, the Chibok community heaved a sigh of relief, the conveners’ persistence and resistance to intimidation helped in securing the release of many of the girls. Now, it is Dapchi community, the human rights activists should hurriedly re-organise themselves and speak with loud voice.