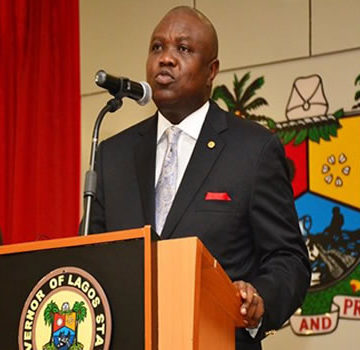 LAGOS State governor, Mr Akinwunmi Ambode, has said that a total of one million housing units are required every year between the next five to 10 years to fix the deficit in providing shelter for the people living in the state.

The governor made these revelations on Monday while speaking at a Round-Table on Infrastructure Financing organised by the Harvard Business School Association of Nigeria (HBSAN) in collaboration with the state government held at Eko Hotels in Lagos, declaring that the state and indeed the country was at a critical point in history where careful assessment must be made on infrastructure deficit and deliberate actions taken to address the challenges.

While stating that the state government was well aware of the challenges confronting it in the area of infrastructure deficit, Governor Ambode said it was time for concrete actions that would not only positively affect the livelihood of the people today, but also protect the future of the younger generations to be taken in that direction.

Governor Ambode, while reeling out statistics, said the population of Lagos, at the moment, was estimated at 24million people which is equal to that of 30 African countries put together.

According to him, by 2050, the state is on track to be a city of 36million people or the 6th largest city in the world after Mumbai, Delhi, Dhaka, Kinshasa, and Kolkata and ahead of Tokyo, Karachi, New York and Mexico City.

Lagos: We have no business with MC Oluomo — INEC

He said: “We have a migration rate of 86 people moving into Lagos every hour, higher than New York, London or Mumbai; we have a population density of 6,939 persons per kilometre and an average of 5 persons per household. With all these comes challenges and pressures on the physical and social infrastructure.

“As at 2010, our state was facing an infrastructure deficit of $50billion, without the inclusion of Housing and Education. In 2017, we can all imagine what this deficit will be.

“Lagos State requires 1 million housing units every year for 5-10 years to fix the housing deficit. As at 2015, our state had 16,000km network of roads but with a daily human traffic of over 7.5million people and 2.8million cars; the power needs of the state is over 10,000 MW of power but we receive less than 2,000MW; we presently supply 210.5 million gallons of water per day (“mgpd”) as against a demand of 750 mgpd; our state generates 13,000 tonnes of solid waste per day more than New York, United States.”

Governor Ambode said while he was not bringing up the details to scare the people, contended that such was needed to appreciate the challenges ahead in the sectors mentioned and others.

He added that it was also for that reason that the state government decided to hold the Infrastructure Round-Table to discuss way out of the challenges.

“As a government, we are aware of these challenges. These are challenges that face most mega cities like ours because we represent hope to many people and we must provide for all who make Lagos their home. If Lagos works, we could have a chance as a nation to work on others,” he said.

According to him, the major issues would be how to bridge the gap in infrastructure considering the fact that revenues were not growing at the same rate as the rapidly increasing population, and that government was unwilling to increase taxes unnecessarily or tax residents to death, a development he said necessitated the discussion.

“In government, we do not have all the answers. That is the truth. That is why we are here. Our primary role as government is to be enablers. Our major responsibilities are to protect the lives and property of residents and to improve their welfare,” the governor said.

The keynote speaker at the session, Professor John Macomber of the Harvard Business School, lamented the over-centralization operating in the country, saying that the Federal Government could build more infrastructure if not for the centrally controlled mechanism.

One of the discussants, Dr Andrew Nevin, who is one of PWC’s leading global thinkers, called on the state government to consider tapping into the huge data available to financial institutions to unlock revenue potential on landed property in the state, saying this could be deployed to address the massive infrastructure deficits the state was currently contending with.