Lagos-Badagry expressway to be completed in 2021 ― FG 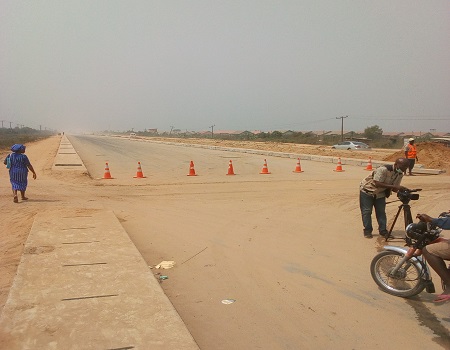 The Director, Federal Highways, South-West, Mr Funso Adebiyi, said on Wednesday that the ongoing construction of Lagos/Badagry Expressway will be completed and delivered by 2021.

Adebiyi gave this assurance while on an inspection tour of the road project, which he described as West Coastline Road Project, and a very important one to not only the Federal Government but all the other West African countries that the road passes through, including the Republic of Benin, Togo, among others.

The long stretch of expressway in Nigeria, covering close to 90kms, has been divided into three sections and is being handled by the Lagos State government, which takes care of the distance between Eric Moore and Okokomaiko; Federal Road Maintenance Agency (FERMA), which handles between Okokomaiko and Agbara, while the Federal Ministry of Works oversees the section from Agbada down to Badagry Roundabout to Seme Border.

The third section, which covers 46.2kms, and being constructed by CGC Construction Company, has been redesigned from two to three lanes on both sides due to the volume of traffic expected on the road.

Speaking with newsmen during the inspection of the project, Adebiyi, who was accompanied by Federal Controller of Works in Lagos, Mr Adedamola Kuti, disclosed that the third section of the project, which had recorded appreciable progress was awarded last year, while work commenced immediately on it.

According to him, this section, a 46.2km starts from Agbara to Badagry and down to Seme Border, adding that the other component of the road project between Agbara and Okomaiko was being handled by FEMA with work also going on there.

“This is West Coastline Road Project and it cuts across from Nigeria and reaches all the way to Togo. Each government in West Africa will handle its own section.

“However, it is necessary for us to know that this section cuts across and stretch from Agbada to Badagry down to Seme. There is a component after Agbara down to Okomaiko that is being handled by FEMA. They are all there working right now.

“Our own part, the third section is to be widened as you can see. In the course of our advancement there, you will notice that we are doing a lot of earthwork and filling. This is  Lagos section we are increasing the lane from two to three, okay. Funding has been made available,” Adebiyi said.

The director, while saying that the project was quite important to not only the Federal Government but also the other neighbouring West- African countries, assured that everything was being done to ensure its speedy completion.

“This project is very very important to the Federal Government as well as the other West African countries.

“I want to let you know that no stone is being left untouched in ensuring the speedy completion of the project,” he said.

Lagos-Ibadan Expressway: More than 75 buildings in RCCG axis to be demolished ― FG