Killers of my aide do not value life, Okowa laments 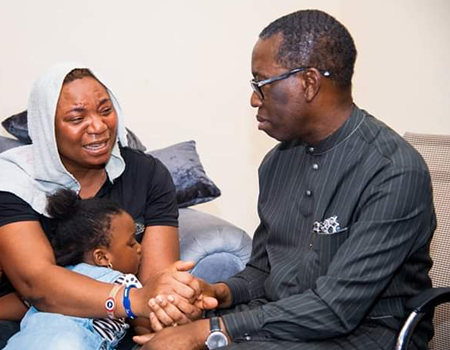 GOVERNOR of Delta State, Senator Ifeanyi Okowa has described killers of his aide as people who attach no value to life and its sacredness.

Okowa gave the verdict during his condolence visit to wife and family of his slain aide, Mr Ngozi Ijei on Monday at Ekpan, Uvwie Local Government Area.

A sober-looking Okowa on his Facebook wall posted his remarks and photos of the condolence visit to the family of the slain aide.

He reported that “Today, I paid a condolence visit to the family of my political aide, Mr Ngozi Ijei who was assassinated on the eve of the botched Presidential and National Assembly elections in Ekpan, Uvwie local government area of Delta State.

“Ngozi was an architect of peace in the new Ekpan of our dream; he had worked largely with the security agencies in the last two years to make Ekpan peaceful, but, unfortunately, those who do not value life decided to strike.

“I know that the loss of a dear one is very painful but I urge the wife, Mrs Veronica Ijei to stay strong, and I also urge other members of the family to take heart and take solace in the fact that nothing happens without the knowledge of God.

“May his soul rest in the bosom of the Lord! @ Asaba, Nigeria,” Okowa prayed.

It will be recalled that the Delta Commissioner of Police, Mr Yinka Adeleke, on Monday, in a statement, vowed to unmask and prosecute perpetrators of the dastardly act within the ambit of the law.

Ijei was shot dead by gun-bearing assailants at volatile Ekpan few hours to the botched Saturday presidential and National Assembly elections, a development that has sent waves of shock down the spines of residents of the area.

Security operatives such as soldiers and police are still keeping surveillance in the area to avert further political killings that have successively claimed no fewer than 13 lives in the last two weeks.

Elections: CAN calls for prayers against another shift