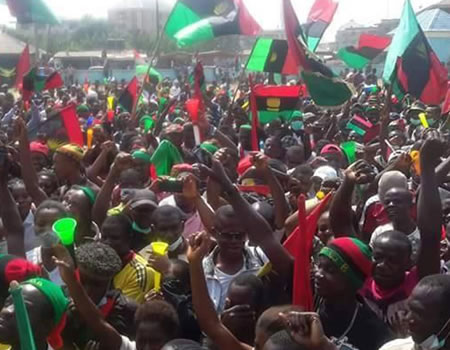 A Senior Advocate of Nigeria, Prof Ilochi Okafor has condemned the proscription of the activities of the Indigenous People of Biafra (IPOB) describing the act as illegal.

He said the secessionist’s group had the right in law for agitation, saying the military had no role to play in quelling civilian demonstration where the police had not failed.

Speaking to journalists in Awka yesterday during the 2017/2018 legal year of the Anambra State judiciary, the former Vice-chancellor, Nnamdi Azikiwe University, questioned the justification of the army in subjecting the defenceless and unarmed youths to physical torture and denigrating their dignity.

He argued that demonstrations towards the realization of the right to self-determination are recognized as fundamental human rights in international law and United Nations charter.

Expressing regrets over the various threats of exterminations the Igbos had faced for decades, the legal luminary called on the agitators not to be deterred as their cries against marginalization would soon yield positive results.

“Despite the verbal violence and grandiose rhetoric of Nnamdi Kanu, IPOB is not a terrorist Origination. No person has been killed by IPOB.

“Its rallies have been heavily crowded but it has not been shown that any person carried or discharged weapons during the rallies,” he added.

On his part, the Commissioner for Justice and Attorney General of the State, Anali Chude, described IPOB as enemies of the state for calling for a boycott of the November 18 poll in the State.

He said, “Enemies of the state wanted to take the advantage to plunge Anambra state into chaos by directing that elections will not hold in Anambra State.

“It is the stand of the state government that elections must hold in Anambra State. We shall stand up to the occasion and refuse to allow people who do not wish Anambra State well to drag us into a situation whereby we will be turned into the guinea pig in Nigeria polity.”

In his address, the chief judge of the State, Justice Peter Umeadi, assured members of the judiciary in the State of a better working condition.