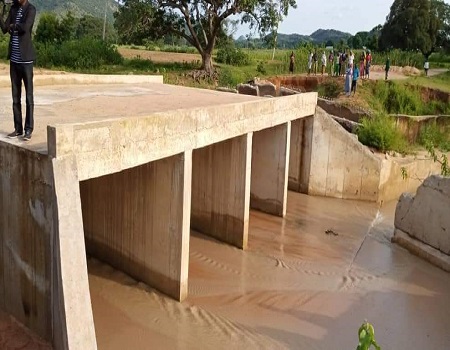 Succour will soon come for Shongom community in Gombe State as the State Governor, Muhammad Inuwa Yahaya has pledged to reconstruct the collapsed bridge linking Boh- Lai- Laipido which contract was awarded for reconstruction during the immediate past administration.

The Governor made the pledge when he paid a surprise visit to the site of the collapsed bridge along Boh to Lai-laipido road in Shongom Local Government Area of the state.

Inuwa Yahaya who was on a working visit to Kaltungo alongside the Federal Government’s committee for the takeoff of the Federal Polytechnic Kaltungo decided on getting a brief on the collapsed bridge and the lives it has claimed had to visit to see things for himself and commiserated with the people of the area.

The Governor pledged to reconstruct the bridge which was abandoned midway into its construction, with its bank now completely washed away and it’s base dangerously damaged as he directed the state ministry of works to immediately present a report on the project with a view to reviewing and completing it in earnest.

Inuwa Yahaya said that he would take the project as a matter of priority which would be reviewed and completed immediately after the rainy season in order to ease the movement of the people.

He further advised the people in the area to put road signs to avoid such accident and directed the local government council Secretary to immediately provide a ‘makeshift’ illumination in the affected area as a warning signal as well as to ease pedestrian movements at nights.

Earlier in his remarks, Buba Alfayo, District head of Shongom appealed to the governor to come to the aid of the community by completing the project to facilitate the movement of people,  goods and services.

According to him, the project was awarded at the cost of N24.5 million by the previous administration and was yet to be completed and said that the collapse of the bridge had affected the socio-economic activities in the area as the road linked to Lai-laipido market, one of the major markets in the state.

Chief Alfayo thanked and commended the governor for his visit to see things for himself, saying Alhaji Inuwa Yahaya was the first sitting Governor to visit the area.

COVID-19: I was not isolated at State International Hotel ― Speaker