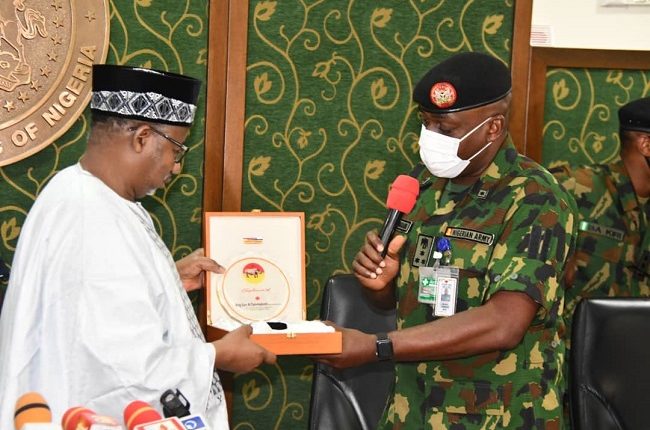 The Nigerian Army has reiterated its commitment to having synergy with other security agencies in the country with the aim of providing a peaceful atmosphere.

He stated that he was at the Government House in order to familiarise himself with the governor as the Chief Security Officer of the state and the people of Bauchi.

Musa Danmadami added that the 33 Brigade in Bauchi which is under the command of 3 Division in Jos, Plateau state has been in Bauchi for quite some time and has been doing its best in conjunction with other security agencies to guarantee peace and security.

According to the GOC “Security generally, is supposed to be a collective effort. Everybody knows that the army can not do it alone, and we know that to a large extent, the governor has been providing enormous support, both moral and logistic to our troops here”.

Musa Danmadami, while thanking the governor for his support to the Army, said that the security challenges bedevilling the country cannot be surmounted without political will.

The GOC who noted with delight the political zeal in Bala Mohammed towards addressing security challenges in the state emphasised that the political solution can only work when there is a political will.

He added that “We have seen in him that political will in addressing all security challenges within the state and that is why, to a large extent, we have seen a breathing space in Bauchi State”.

The GOC then commended the governor for carrying everybody along in his government irrespective of whichever divide they are including all the security apparatus in the state and for synergy with security agencies.

While responding, the governor, Sen Bala Mohammed assured the GOC of his administration’s support to the Nigeria Army as well as other security agencies in Bauchi State.

Bala Mohammed said that “we understand that you were recently posted as the 39th GOC to one of the most historic Divisions in the country where the current UN President superintended when we were young and we know that it has the spirit and value of the military tradition of confronting every challenge so far that has come along our way as a nation”.

Bala Mohammed who said that he is pleased that the GOC had worked in Bauchi before, expressed optimism that he is very conversant with all the terrains and that will help him carry out his duties successfully with synergy with security agencies.

The governor stated that “You know the terrain very well, you are part and portion of this country, and you know that we are really bombarded with insecurity”.

Bala Mohammed, however, noted that the Nigerian Army under the Chief of Army Staff, Tukur Buratai whom he said has done so much since the inception of the present administration to make Bauchi safe and secured.

He also noted that “Bauchi is surrounded by seven states and we are the gateway like I said, to the North-East itself and North Central and the North West. So, all these security challenges that are coming from all these places were really coming here but at the end of the day, we have become the safest place to stay in the northeast because there is peace”.

He added that the peaceful coexistence been enjoyed in Bauchi State has not been possible without the full support and engagement of all stakeholders in the peace process.

Bala Mohammed then advised the GOC to request for vehicles from the North East Development Commission (NEDC) to further boost his division’s capacity to carry out adequate surveillance.