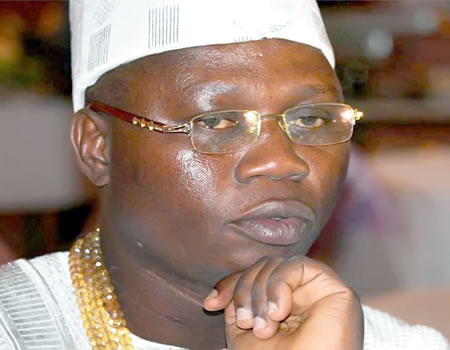 Aare Ona Kakanfo of Yorubaland, Iba Gani Adams, has lauded the Inspector General of Police (IGP), over his resolve to improve the security architectures in the South- West by partnering with Adams-led members of the Oodua Peoples Congress (OPC) to reduce the spate of insecurity in the zone.

The IG revealed this as part of his strategies while speaking on Monday at the South-West geo-political Security Summit, held at the International Conference Centre, University of Ibadan, Ibadan, Oyo State.

Iba Adams, who also spoke at the gathering, described the initiative by the IG as laudable, commending him for earlier sending emissaries to solicit his support for crime-fighting in the South West and Nigeria at large.

The Aare Ona Kakanfo promised his readiness to partner with the police to ensure adequate security of lives and property in the country, just as he reaffirmed his beliefs in the new approach to developing a better and lasting relationship between the OPC and the police.

According to him, the recent move to secure the South-West from banditry and other acts of criminality will help the police in getting adequate information and intelligence gathering, just as he equally applauded the Oyo State governor, Mr Seyi Makinde for making the best impact on the burning issue of insecurity in the zone.

“Let me applaud the IGP for this laudable initiative, it is a welcome development, that must be sustained. I want to also appreciate the Oyo State governor, Engineer Seyi Makinde, who is the host governor, for making the best impact on the burning issue of insecurity in the South-West.

“Let me say it clearly that I am ready to support and partner with the police authority in ensuring that the spate of insecurity in the country, especially, in the South-West is reduced drastically. We have done it before and we can still do it. I am ready to complement the recent efforts of the police,” he assured.