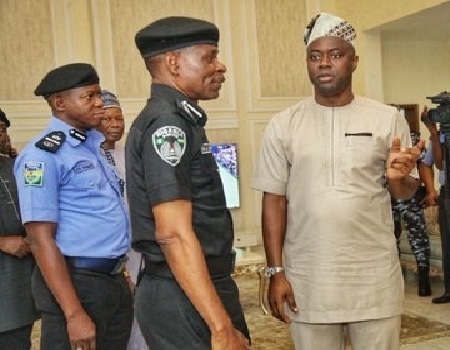 The Inspector-General of Police (IGP), Mohammed Adamu, and the governors of the southwest states on Monday agreed to deploy cutting edge technology to combat crimes in the region.

Apart from this, the Oodua Peoples Congress (OPC) has also agreed to partner with the police to properly fight the rising insecurity in the southwest and bring it to the lowest ebb.

These were parts of the resolutions reached at the southwest geopolitical zone security summit held at the International Conference Centre of the University of Ibadan.

The summit, convened by the IGP had in attendance the governors of the region, security agencies, traditional and political leaders from Yorubaland, leaders of socio-political groups, religion and community leaders among others.

The host governor, Mr Seyi Makinde of Oyo State, while reading the resolutions on behalf of the governors and the IGP, said the deployment of modern technology would be strengthened to achieve maximum results in the region.

According to him, deployment of technology like the CCTV would be sustained and improved upon to reduce criminality to the barest minimum in the region.

He also said the summit agreed that the area surveillance of the flashpoints in the southwest region would be sustained to ensure that crimes.

The summit, according to the governor, agreed to the employment of Community Policing Officers (CPO) from within the communities they reside.

He explained that the CPO are expected to complement law enforcement functions of the conventional police officers by performing low risk security duties.

Makinde added that it was resolved that a committee comprising men of the police, other security agencies, the OPC, Miyetti Allah Cattle Breeders should be set up in each of the six states to discuss crime reduction.

He also said the IGP had approved the deployment of a special force to be headed by a commissioner of police, who would lead a tact team to combat crime in the state.

Earlier in his welcome address, Makinde said his administration was ready to promote effective synergy among security agencies in the state.

He also announced that Oyo State in the next few days would unveil a security roadmap, focused on the improvement on security infrastructure, robust partnership, application of technology, collaboration with development partners among other things.

He said, “the overall objective of our intervention is to ensure safety and security of our people, reduce the fear of crimes, as well as ensure that all residents of Oyo State and investors can go about their lawful endeavours without hindrance.

“We are not oblivious of our obligations under the Constitution of the Federal Republic of Nigeria, that ‘the security and welfare of the people shall be the primary purpose of government,’ we consider this sacrosanct.”

The IGP, however, noted that the security situation in Nigeria had improved tremendously with isolated cases of kidnapping and armed robbery in the southwest, particularly along Sagamu-Ore-Benin road.

According to him, the introduction not the Operation Puff Adder to combat crimes had led to a drastic reduction in crimes across the country.

Adamu said between January and August 2019, 552 murder suspects were arrested in the country with the southwest accounting for 66 of such cases.

He said the success recorded by Operation Puff Adder would make the police move to the next stage which is the launch of the community policing scheme.

The Ondo State Governor, Rotimi Akeredolu, however, tasked the IGP to fish out the killer of the daughter of the leader of Afenifere, Mrs Funke Olakunri.

The governor, who was represented by his deputy, Hon Agboola Ajayi, arresting the killers would instil confidence in the people about the efforts of police at ensuring the security of lives and property across the country.

Akeredolu, who is also the chairman of the southwest governors forum, said the region had designed a template to ensure security in the region.

He said the DAWN commission of the southwest would continue to champion security of lives and citizens of the area.

He, however, noted that effective community policing being championed by the Inspector General of Police could only be successful with the participation of the people.

Akeredolu, however, urged the IGP to intensify patrol of the forest of the state by helicopter to further smoke out criminals from their hideout.

The Ogun State Governor, Dapo Abiodun, identified communication as one of the challenges facing security agencies in the state.

He said the police and other security agencies operating in the state were using open lines to communicate, saying the arrangement was wrong.

Represented by his deputy, Mrs Noimat Salako-Oyedele, the governor said efforts were on to change the tide and improve the situation.

He said the state has major security challenges because it has boundaries with Lagos, the commercial centre of the country.

Abiodun noted that no meaningful development can take place without adequate security.

The Lagos State Governor, Babajide Sanwo-Olu, in his contributions said technology should be massively deployed to achieve results.

The governor, who spoke through his deputy, Hamzat Obafemi, called for the deployment of aerostat in the country.

He said the deployment of technology was necessary because there would never be a time that the country would have enough police officers.

According to him, the state had been supporting the police and would be ready to continue to invest in security.

The governor said there were 900 CCTV cameras monitoring Lagos State with plans to add more to further secure the state.

He said Lagos State was ready to partner Ogun State for the installation of more cameras to make the boundaries between the states more secured.

The Osun State Governor, Gboyega Oyetola, called for the recruitment of more police officers as the country is under policed.

He said in recruiting the new police officers, efforts should be made to domesticate the employment by ensuring that people from a particular locality are posted to such state.

The governor said since the people understand the terrain, it would be easier for them to secure such areas.

Oyetola, however, raised the alarm that because of mining activities in the state, bandits that were smoked out of Zamfara State had relocated to Osun.

He, however, said the state was ready to continue to support security agencies operating in the state to make lives and property of the people more secure.

The Ekiti State Governor, Kayode Fayemi, said the traditional rulers in the southwest should be involved in security issues.

Fayemi, who is also the chairman of the Nigerian Governors Forum, also said there was the need for police to patrol major highways in the region to instil fear in the criminals.

Represented by his deputy, the governor urged the IGP to ensure that whatever on record to be done should be implemented to the letter.

Traditional rulers from the six states of the southwest also spoke at the summit with all of them agreeing that there was the need to step up security in the region.

The Olubadan of Ibadan, who was represented by Otun Olubadan, High Chief Lekan Balogun, said the event had changed his perception of the handling of security issues in the southwest.

The monarch pledged that traditional rulers in the state were committed to the security of the area and would sustain the situation.

Also speaking, the Ooni of Ife, Oba Enitan Adeyeye Ogunwusi, lamented that Yoruba people living outside the country were afraid of coming home because of security challenges.

He also warned against politicise issue of security and development in the southwest.

The Oba of Lagos, Rilwan Akiolu, said the major problem facing the provision of adequate security in the country was the inadequate funding of the police.

The traditional ruler, who said he was against state police, explained that what the country needed was community policing.

He urged the Oyo State government should set up a committee to be headed by Gani Adams and Yinka Odumakin on security in the region.

The Alake of Egbaland, Oba Adedotun Gbadebo, in his contribution, noted that security challenges in the country were not new as it was a product of certain problems in the society.

He said the government should address the issues of poverty and joblessness among the youth to have a safer country.

The Yoruba socio-cultural group, Afenifere, represented by its spokesperson, Yinka Odumakin, restated the position of the group on the establishment of state police to combat crime in the country.

He said the country also needed to return to true federalism that would make room for democratically managed state police.

Odumakin said, “security is not only in terms of fighting crimes, but we also need social security, we should bring down poverty among the people.”

The Aare Ona Kakanfo of Yorubaland, Chief Gani Adams, said he was ready to work with the IGP to resolve security issues in the country.

He also admonished the police to change its approach to issues and not take those fighting for the people as enemies of the government.