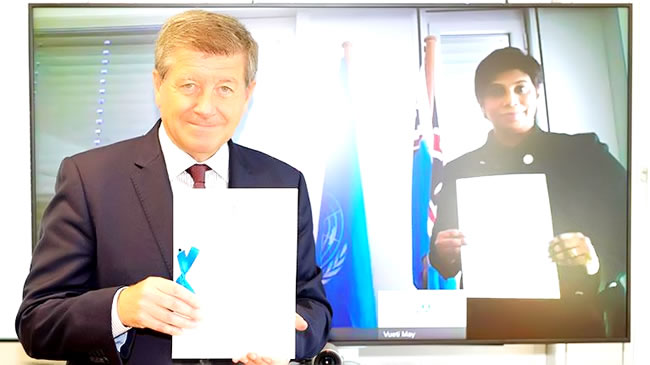 As Fiji ratified the ILO Convention 190 on violence and harassment, the convention will now effective in June next year.

Any new ILO Convention requires only two ratifications by two member states to enter in force. Fiji became the second country to ratify the ILO’s Violence and Harassment Convention, 2019 (No. 190) after Uruguay ratified it on 12 June.

The ILO has, therefore, declared that with the deposit of this second ratification, the convention will enter into force on 25 June 2021.

Ambassador Nazhat Shameem Khan, Permanent Representative of Fiji to the United Nations Office and Other International Organisations in Geneva, deposited the ratification instrument with ILO Director-General, Guy Ryder, in a virtual ceremony.

While depositing the instrument, Ambassador Khan, said “This ratification is a testament of the government’s commitment to equality as is enshrined in the Fijian Constitution, and ratification is also consistent with Fiji`s membership of the Human Rights Council. Ratification of Convention 190 demonstrates Fiji’s willingness to lead the way in committing to international standards and best practices.”

She added “This convention is timely to address real challenges in the world of work today such as violence, harassment and intimidation. We note in particular the inclusivity of the convention. It purports to protect and empower all those who are the subject of bullying and harassment at work, including women. The convention encompasses the intersectionality of the sources of discrimination, thus encompassing the reality of the lives of many workers.”

Adopted by the International Labour Conferencd (ILC) in June 2019, Convention No. 190 is a landmark instrument. It is the first international labour standard to address violence and harassment in the world of work.

Together with recommendation No. 206, it provides a common framework for action and a unique opportunity to shape a future of work based on dignity and respect.

The convention recognises that violence and harassment in work can constitute a human rights violation or abuse is a threat to equal opportunities, is unacceptable and incompatible with decent work.”

It defines violence and harassment as behaviours, practices or threats that aim at, result in, or are likely to result in physical, psychological, sexual or economic harm.” It reminds member states that they have a responsibility to promote a general environment of zero tolerance.”

It defines violence and harassment as behaviours, practices or threats that aim at, result in, or are likely to result in physical, psychological, sexual or economic harm.” It reminds member states that they have a responsibility to promote a general environment of zero tolerance.

“I am extremely pleased to receive this instrument of ratification, which bears witness to the commitment of the Government of Fiji to combatting violence and harassment in all its forms in the world of work.

“I note in addition that this ratification was unanimously approved by the Fijian Parliament on May 28, 2020,” said ILO Director-General Guy Ryder.

He added “This ratification marks an important step towards the achievement of decent work, particularly in these unprecedented times in which the world is struggling to overcome and recover from a global pandemic.

“In times of crisis and economic insecurity, the risk of violence and harassment escalates, as has been so evident during this devastating pandemic.

“Violence and harassment is unacceptable at any time; it is clear that Convention No. 190 has a crucial role to play, whether in times of prosperity or during times of crisis.

“For a human-centred response and recovery, free from violence and harassment in the world of work, Convention No. 190 provides a clear and practical roadmap.”