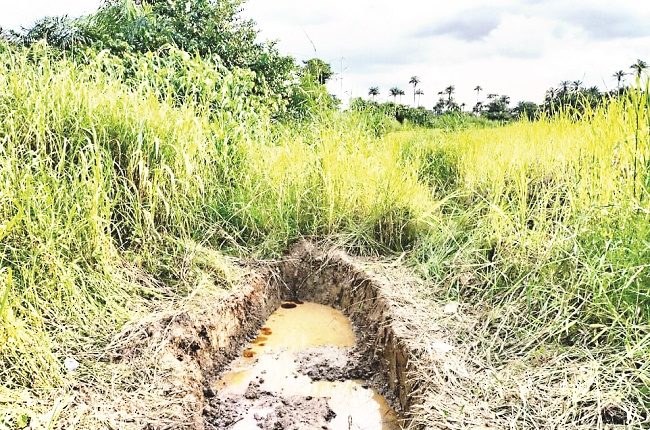 A report by Environmental Rights Action/Friends of The Earth Nigeria (ERA/FoEN) has exposed improper cleanup and remediation of spill sites by Shell. In focus is the Ikarama community in Okordia Clan of Yenagoa Local Government Area in Bayelsa State.

According to ERA/FoEN which has been monitoring the area for over a decade, the Ikarama community has the highest frequency of oil spill incidents in Bayelsa State.

However, the report indicates that the majority of the oil spills have occurred from facilities of SPDC; especially from Adibawa/Okodia delivery line, Okodia/Rumuekpe pipeline and Okordia Manifold.

Most of the oil spills are said to have occurred within the immediate community environment, close to residential buildings, farms and farmlands.

Oil spills impact the environment in different ways. Oil spill sites go up in flames most often and areas where cleanup was attempted are often delayed before it is acted upon. This allows for percolation or leaching of crude oil into the ground.

Immediate-past Youth President, Comrade Benjamin Warder first drew the attention of ERA/FoEN to this when he reached out on Saturday, August 14, 2021 with photos and this statement. He said: “While trying to get mud for filling close to my business centre along the SPDC manifold road at Ikarama, I was amazed to see crude (oil) surfacing at this level. This goes a long way to tell that the entire land can’t be used anymore for farming activities.”

ERA/FoEN field monitors, Alagoa Morris and Akpotu Ziworitin, visited Ikarama on August 20, 2021. “On getting to the site, about 30 metres before the bend to Shell’s Okordia manifold environment, ERA/FoEN watched when a fresh area not far from the earlier dug spot which Benjamin Warder reported seeing crude oil was cleared of elephant grasses and digging started by two community folks,” Morris said.

ERA/FoEN field monitors demanded that an entirely fresh spot be cleared and dug. It was eventually confirmed that crude oil in the dug area is in the depth of more than one metre.

‘Our crops don’t do well anymore’

Effort was subsequently made to hear from some community folks. A former women leader of the community, Chief [Mrs] Ayibakuro Warder said, “Our crops don’t do well again, particularly the cassava tubers. Sometimes when we plant it looks as if it is dying off. We change it again, with other stems. Plantain too. Sometimes the newly planted ones would die, and we must replace them. Tuber plants like cassava and yam no longer yield like times past; yam is getting rotten.

“So, we feel this could be because of crude oil in the environment and oil spill impacted sites not properly cleaned up and remediated. We have not been experiencing this before now.

“The new experience we are having is that the crops are no longer doing well. Sometimes, in some areas of our farmlands, as we cultivate to plant, we see crude oil. That is what we are contending with and, as fisher folks and farmers this is a threat to our means of livelihood and health.”

Another community member, Washington Odoyibo, said: “These plantain [pointing] stands you are seeing, I planted them some months ago and you can see how stunted they are; they are not growing. As you are seeing the heavy presence of crude oil in this pit, that is how the entire environment is. Whatever we plant no longer produce good yield.

“Even fish, if you kill any fish around this environment and take home to cook and eat, it is crude oil smell you will perceive and not fish again.

“This is what we are experiencing, and it might be what is causing different kinds of diseases in the community, including cancer that our people had never experienced before. This situation is very disturbing.”

Another resident, Madam Katherine Odoyibo, said: “Although there are still certain areas that crude oil has not impacted in the environment, anywhere crude oil has touched is no longer productive in terms of fishing and farming. Sometimes the spilled crude oil is spread by flood to places far away from the spill points.”

The report states that the “latest revelation has confirmed ERA/FoEN’s position over the years in monitoring and reporting the Ikarama environment that Shell has not been doing proper cleanup and remediation of oil spill impacted sites.

“There is need for the relevant authorities to take steps to ensure that Shell and Agip commit themselves and get back to all spill sites in Bayelsa State and carry out proper cleanup and remediation of all recorded spill sites in the interest of our people.”

Speaking on the report, ERA/FoEN Executive Director, Chima Williams said: “The Federal and Bayelsa State Governments should take urgent steps to commence scientific investigation (including environmental audit) on all oil spill sites in Ikarama and beyond, including comprehensive health examination of the people, with a view to ascertaining the true situation of the environment. The oil companies responsible for the facilities should be part of this environmental audit exercise.”

“The implication of not doing thorough cleanup and remediation in terms of health of the people and fecundity of their farmlands, swamps, lakes, and other impacted environment is huge.

“UNEP’s recommendation on Ogoni should be extended to all impacted sites in the Niger Delta as this case in Ikarama points to that urgent need.”

Speaking on the findings of the report, ERA/FoEN Executive Director, Chima Williams said: “The Federal and Bayelsa State Governments should take urgent steps to commence scientific investigation (including environmental audit) on all oil spill sites in Ikarama and beyond, including comprehensive health examination of the people, with a view to ascertaining the true situation of the environment. The oil companies responsible for the facilities should be part of this environmental audit exercise.”

Why I Empowered People On My Birthday -Prayer Pemu