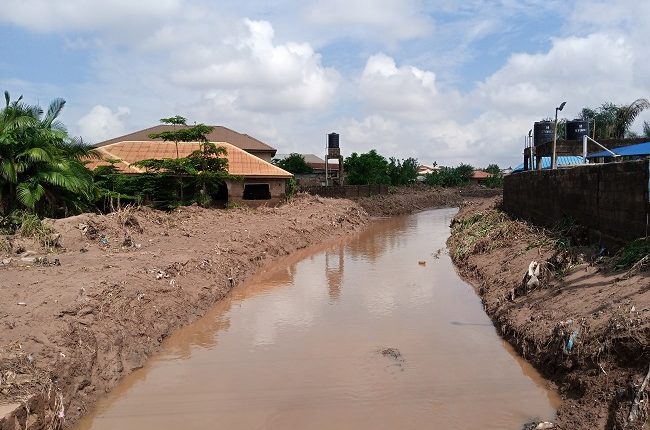 Following the heavy downpour on Tuesday, residents of many communities within Ibadan, the Oyo State capital, on Wednesday took stock of the damages caused by flooding in their communities and expressed appreciation that the effect was not as devastating as the one experienced in previous years.

Residents of Kute, Kumapayi, Bode Wasinmi, Baale quarters and Olodo Garage among others were thankful that though there was flooding in some parts of the communities; no lives were lost, attributing the improvement in their situation to the recent dredging of rivers in their communities.

Nigerian Tribune’s tour of the affected areas indicated that many of the streams and rivers around areas vulnerable to flooding had been dredged by the Ibadan Urban Flood Management Programme (IUFMP) in the last three weeks in a proactive step to reduce effects of flooding.

Speaking with Nigerian Tribune, the Chairman of Ifesowapo Kute Landlords association in Kute area of Lagelu Local Government Area, Pastor Akinyemi Olusegun Amos stated that though many homes were affected in Kute area, they are grateful that the intervention by the state government through IUFMP helped to mitigate the devastating effect.

“We have been suffering from flooding for years, indeed, it had always been devastating but this year, it is different. Though many homes were still affected and properties damaged, it is still better than previous experiences and we can only thank the government and the agency that worked on the river. They just dredged this last month, if not for the dredging; this is not what we would be saying, things would have been worse. I can say it was a timely intervention.

“We however also want to appeal to the government to help us find lasting solutions to this our problem because it seems all the water from Akobo and Akala way is channelled towards our area here, Kute has two river sources and we are always having problems during the heavy rain. We appeal to the government to also help dredge the other rivers so that we can have respite,” he said.

Nigerian Tribune gathered that these areas were known to be susceptible to flooding and they had been living with this challenge year in, year out. In most of the areas, houses were built on waterways while most construction didn’t make provision for a drainage system.

Speaking on the flooding incident, the chairman of the Oyo State House of Assembly Committee on Environment and Ecology, Honourable Olusola Adewale Owolabi representing Ibadan North Constituency 2 who led his team including the Majority Leader, Honourable  Sanjo Adedoyin from Ogbomoso, to the flooding sites said the recent dredging helped the state, commending the IUFMP for a job well done.

“We have gone round and found that if not for the dredging that IUFMP has done in the past few weeks, the effects of yesterday’s flooding will have been more devastating and it would have had a more terrible effect on Ibadan and the state. We thank God for the government, World Bank and majorly for IUFMP because they are doing a great job. It is when we moved round that we found that if not for IUFMP things would have been terrible. We also found that no life was lost, there was no casualty as a result of yesterday’s flooding

“The dredging being done by IUFMP is a continuous one and they are still on it but in those sites that we visited today, the five we saw today were executed well. Though there is a site at Kumapayi where the dredging needs to be done again and widened because all that was done have been destroyed by flood,” he said.

Also speaking, the Permanent Secretary of the Ministry of Environment and Natural Resources, Dr Bashir Olanrewaju said, “We are fortunate to have started the dredging exercise.  From some of the sites, you will discover that had we not done dredging on the rivers, by now, maybe we would have had casualties and fatalities because even with what we did, some rivers still overflew their banks.

“We are fortunate that lives were not lost especially at Kumapayi, we discovered that the extent of the overflowing of the bank by the river was massive but the community leaders were still appreciating the government for dredging the river. The consultants, contractors and IUFMP team had done a very good job because they were thorough. I am saying that the dredging sites were well executed, we can only appeal to the contractors to do more and fast track because Nimet already warned that there will be heavy rains, seven times higher than what Ibadan experienced in 2019 this year.

“We are just going to the peak of the heavy rains. I appeal to the communities also that streams and drainage systems are not meant to be sued as dumpsite because it blocks water path. Also, people should stop building on flood plain because that is tantamount to sitting on top of gun powder while at the same time playing with fire,” Dr Olanrewaju said.