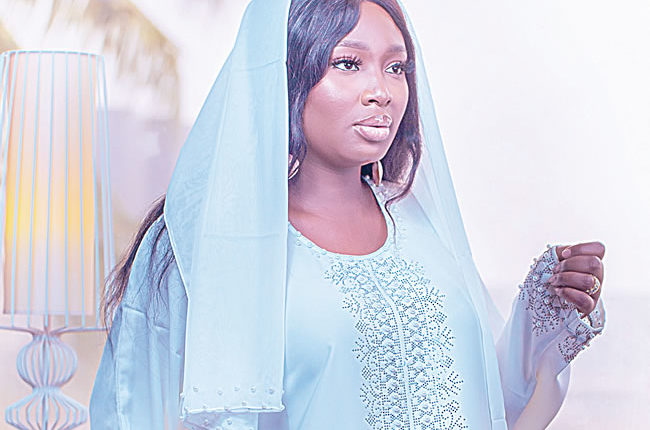 In less than two years in Nollywood, actress and model, Oyebade Adebimpe, popularly known as Adebimpe Omooba or Moh Bimpe, clinched a nomination at the last African Magic Viewers Choice Awards. The Ijero-Ekiti princess and graduate of English from Ekiti State University, Ado-Ekiti in this Interview by FEMI OGUNTAYO, talks about her fast-rising career. Excerpts:

What are the things you are grateful to God for in your fast-rising career?

You were into modelling, how did you join Nollywood?

I started from modelling; I have been a model all my life, like, since I was a child. I was with G and G model when I heard about the audition for a movie – Agbede Meji by Yomi Fabiyi in 2016. They said they needed a dark-skinned model; they stated their criteria and my manager then advised me to go for the audition. I was in Benin, having my NYSC there at that time. I told him I was not going to be available and I didn’t go at first. Then, after two weeks, they reached out that they didn’t find who they were looking for and they want all of us to start sending in our monologues.

I’m a very shy person, so I said I was not going to do it. I just didn’t like acting at all. Even when I was in school at the University of Ado-Ekiti, now Ekiti State University (EKSU). I studied English and there was this course – Theatre workshop where we had to act on stage. I would hide so that I won’t be selected among those that would act. Eventually, I sent in my monologue reluctantly and they got back to me. They were like. You are the one we have been looking for, please come to Lagos for the script reading. I asked, how? Me that I don’t know how to act and I said I was not going to do it, that I just sent the monologue because I was told to do so. They said I should come and all that. Eventually, because of the good people around me like I said, I am always with the right people at the right time, they said I should go.

Then I went to Lagos and that was how I got the script, I read it, then I asked, who is playing the role of Onikede, because it was a lead role. I was to act alongside Gabriel Afolayan and Toyin Abraham. I have always been a fan of Gabriel’s works and Aunty Toyin has always been my role model. So, these are the people I look up to, how am I going to act with these people? I can’t act with them o. I was so scared. So, I was on set there for over a week, it was shot in Abeokuta. That was how I started and after the movie came out, in October 2017. People started asking, who is this ‘Onikede’ in the movie? I had even forgotten I shot any movie because after I shot a movie, I left and returned to Benin, where I was serving. So, people started looking for me, they started calling me for jobs and opportunities started coming in from left, right and centre. Then I just decided to do more and here I am today.

Tell us about your growing up. How was your childhood like?

I am from Ekiti State, Ijero-Ekiti. I am a princess of the Oyiyo royal family.

Who are those you would say helped your acting career grow?

Yomi Fabiyi was the first person that featured me, even though I have not done any project with him after then, I have not even seen him since then. After then, it has been Kehinde Adeyemi (Corporate Pictures), Lateef Adedimeji and other directors and producers.

Talking about Lateef Adedimeji, there were these viral pre-wedding pictures of both of you all over the internet. What was this all about? Was it for a movie?

Lateef is my guy and it wasn’t a movie.

So, what was the picture all about?

Hmm, I don’t want to talk about it.

Well, we will see to that right?

Yes, we will see to that (Laughs)

Maybe you need to clear the air about this because you both feature in a lot of movies together as a couple, and this has always raised a lot of speculations. Some people say you guys are engaged, some links online even say you are his wife. What do you have to say to this or you want to keep that in the cooler too?

Of course, we want to keep it in the cooler. Yoruba people say, “eni ti an gbe’yawo bo waba kii garun’ (It is only a matter of time before everything is revealed to the public). So, you guys should just keep calm and relax.

Which would you say pays your bills the more now? Modelling or acting?

Well, I will say, when I started acting, I used to be a model. I was a professional model and modelling was paying more than acting. But now, because I have the face and I am a bigger brand now, it is helping the modelling jobs. What I am offered now is better because I now have the face and the brand. So, they both work hand-in-glove.

Are there any roles you have played before which you regretted playing?

Yes, there are movies I featured in which I don’t like. I won’t say a particular role, but some movies. This is because of the pressure and the fact that our job is so time-consuming and some times, there wouldn’t be time to read scripts because of back to back jobs. So, I have seen myself in some movies and I will be like, oh my goodness Bimpe why did you do this? It is something I have been working on since late last year. I would go for any job without reading the scripts and knowing who the directors or producers are. If you don’t give me the details, then I am not going on any set.

Is there a role you will never play, no matter the amount of money offered?

That will definitely be a nude role; I won’t do it because it will kill me (Laughs)

What is your ideal man?

My ideal man is God-fearing, thoughtful, caring and of course, cute, ambitious and should just be a nice man. I don’t expect him to be perfect, because I am not perfect.

What would you say distinguishes you from other new actresses in the industry?

That would be the colour of my skin, the fact that I am me and I am real. When I came into the industry a lot of people had an issue with being dark-skinned, but I got into the industry and I asked: Why can’t I be dark? You don’t have to bleach your skin before you can get to the top. So, I was just being me and a lot of people advised me to bleach my skin. I said no. Even when I was a full-time model, I was always picked because of my dark skin. So, I have gotten a lot of opportunities because I am black. So, I said to myself, if a fair complexioned person can do it, a black person can do it more.

I don’t see things as embarrassing. I just feel it is life and things happen. The only thing I would say happens to me and I still wonder why are people like this, is when I go out, probably for a photo shoot at a hotel, alone, and some people just come to me and ask me, ‘how is uncle Lateef?’ and I will be like, what if I am here with someone else, let us just imagine I was there with someone else? So, it is always funny. Not because I am with someone else, but I just find it awkward. Why do people do this? Another thing is because you are a public figure if you go out there; let’s say to the market for example; you will want to buy something and try to price it, they will just tell you they are the ones watching your movies, they love your movies, so you shouldn’t be pricing their goods, and you should just buy it like that. So because you watch my movies now, I shouldn’t price goods anymore, what type of love is that? (

What about your best moments on this job?

As at last year, my best moment was when I got nominated at the AMVCA. I wasn’t expecting it. I wasn’t up to two years in the industry. So, it got me really crazy when I heard about it. I was like, is this real? Then another one would be when Aunty Toyin called me around September last year and said ‘Bimpe get ready, you are playing the lead role in my next movie. We are shooting in January.’ What? Lead? How? Oh my goodness. Thank you so much. And she said, ‘don’t thank me, Bimpe you are a big star.’

What are your plans for the brand ‘Adebimpe Omooba’?

Well, expect more from me, more English movies; I have paid my dues in the Yoruba industry. So, I want to explore more of English movie productions. By the end of this month, I am producing one called ‘Before Sunset’. I need you guys to watch out for it.

Why my songs are different, stand out —Moriento