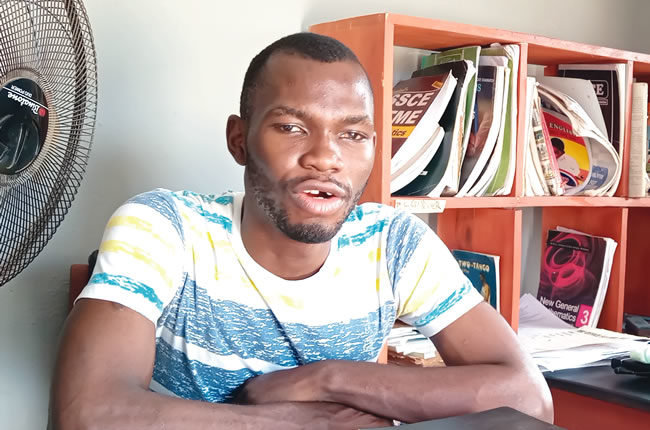 Despite losing his sight about eleven years ago, Timilehin Olonisaye, a graduate of the University of Nigeria, Nsukka, defied all odds to produce a set of past questions in order to help the country reduce the failure recorded in O’level and JAMB examinations nationwide. IFEDAYO OGUNYEMI reports:

A young man exited the compact office structure inside the large, expansive compound located at Orogun, about 3km North-West of the premier University of Ibadan (UI). He asked whom the reporter sought. “I’m here to see Timilehin,” this reporter said.

“Bro Timilehin, someone is here to see you,” he said as he turned to the office structure.

“Who is that?” Timilehin Olonisaye, a young physically-challenged man in his late twenties said in Yoruba. He was jolted by the sound of the response from this reporter whom he had made an acquaintance over the phone earlier.

“Good afternoon Mr Ifedayo, you’re welcome to our office. You can sit down here,” he cheerfully replied as he vacated the sofa-like seat where he sat before the reporter’s entry.

Without support or assistance from his cane, he made his way into the space between the two brown-coloured wooden tables inside the office. John Ajayi, Olonisaye’s friend and assistant whom I sat across excused himself to attend to some of the students inside the tutorial classes about twenty steps from where we sat.

Olonisaye made his way unaided to the seat left by Ajayi as he gulped the remaining contents of the orange-flavoured soft drink in his hand.

Stationed on the plastic table beside where I sat were four editions of the FAT Success UTME Reloaded past questions Olonisaye and other scholars co-produced for students in preparation for the promotional and certificate examinations such as West African Secondary School Certificate Examination (WAEC), National Examination Council (NECO) and Joint Admission and Matriculation Board (JAMB) which millions of Nigerians have continued to fail every year.

In 2019, 74% representing 8,790 students out of 11,892 students failed WASSCE. This figure shows that 3,102 candidates who sat for the examination (representing 26.08%) obtained credit and above in a minimum of five subjects including English Language and Mathematics. A similar trend happened in 2018, 2017 as well as in other qualification exams which form part of the prerequisites for admission into tertiary institutions in Nigeria. 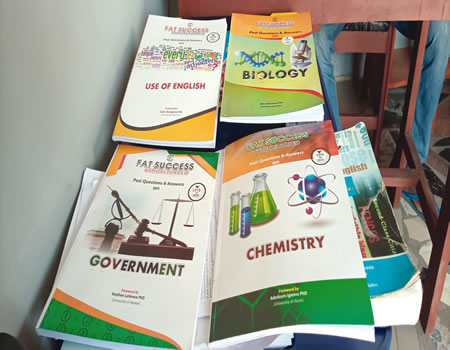 Beyond these numbers, some students and parents have resorted to devious means including enrolling at special centres where they believe certain persons would help them or their children and wards cheat the system in order to make the cut off those who passed.

Many of these failures have been attributed to the short and sometimes inadequate preparation of the students for the examination, use of unqualified teachers in secondary schools, the decline in literacy level and the failure of students to attentively attend to requirements of the subjects they take. These lapses, as well as others, were what prompted Olonisaye to co-opt others to set up the tutorial centre and produce these UTME past questions.

Doing this afforded Olonisaye the opportunity to properly prepare secondary school students for these examinations. In the first attempt at promotional examination after setting up the tutorial centre more than a year ago, 80% of the students got more than the national cut-off mark of 200 for JAMB examination.

In his love to further impart knowledge in the young lads, the visually-impaired man in his late twenties recently secured a loan under the collaboration between Bank of Industry (BoI) and Youth Entrepreneur Development Programme (YEDP) to invest in the center and to improve on its successes.

With funds accrued from the loan and from family members and friends, he also published a unique past questions and answers that cover WAEC, NECO, GCE and JAMB examinations from 1978 to 2020 in subjects such as Use of English, Biology, Physics, Chemistry and Government which he personally compiled despite being visually-impaired. He is among the 1.2 million physically challenged persons living in Nigeria according to the World Bank – some of whom (including Olonisaye) were disengaged from the N-Power programme alongside able-bodied persons in 2020.

Five versions of the publication have so far been distributed and marketed in not less than ten states in the country – Lagos, Akwa-Ibom, Edo, Ondo, Ekiti, Kwara, Ogun, Oyo, Enugu and Anambra – in a bid to save more Nigerian students from the pangs and agonies of failing examinations into tertiary schools.

When asked about the rationale for establishing the center, Olonisaye said: “I had that dream of owning an educational center before, but I didn’t think it would be this fast. I founded this because of the lapses I discovered during my engagement in the N-Power programme in a public secondary school in Ibadan where I taught for two years.

“We don’t really have much issues getting students to the center, there is nothing attached because I’m a visually-impaired person. It is what they have tested and trusted, it’s about our own performance, are we delivering value? Yes! Are we impacting knowledge? Yes, we do with capable teachers, specialised tutors. The only challenge we have is some basic facilities we lack.

“We’ve had students that scored 298, 301, 288, 250 and more. Generally, our students recorded about 80% success in JAMB. Students are already enrolling here for WAEC coaching because they are the ones who believe in what we offer. We don’t only have JAMB and WAEC classes; we have preparative classes in morning and afternoon for JSS 1-3 and SSS 1-3.

“Though we have a very conducive environment for classes, the rent has been a challenge. We have been getting loans and little support from family and friends to invest in the project, if not, we would have closed down because this business is challenging and we still need to pay the tutors and teachers. Infrastructure has been one of the issues we have been facing. We only have two computer systems for our JAMB classes and there are still a lot of things we still believe we need and we are still struggling to get.”

Speaking further on the reasons why FAT Success UTME Reloaded is different from other similar publications, the graduate of political science from the University of Nigeria Nsukka (UNN) said: “The project is a departure from the conventional norm; a new approach to answering questions for students. What made it special was that we collated all questions in those subjects from 1978 to 2020 based on topics in accordance with SSSCE and JAMB syllabuses. It is a question bank for teachers and students. When they are doing a particular topic in Biology for example, just go into the book and solve all the questions on that topic before you move to the next.

“The user will be able to identify the weaknesses and strengths in that particular topic. It reduces confusion for students because it also has detailed explanations for each of the answers. It is a paradigm shift. Most schools we’ve approached are yet to take it because they are waiting for approval from the federal government but they see it as a unique innovation they know will help teachers to know which topic to concentrate more on when preparing for exams.”

“I have been taking this subject for years; I took it in public secondary schools too. I have developed materials for my students for this particular subject and when the idea for the project came, there were no best hands to handle government other than mine. It was rigorous compiling the questions based on topics, deviating from the conventional norm which is usually based on a year-on-year basis. It took me more than a year; I researched and compiled them every day because we needed to explain the answers even after arriving at them,” he said.

While taking this reporter on a tour of the six-room centre, Olonisaye added that, for the second edition of the publication, the team is also looking forward to producing past questions on Christian Religious Studies, Mathematics, Literature-in-English, Economics and Accounting.