I want my work, not face, to speak for me —Bunmi Ajakaiye 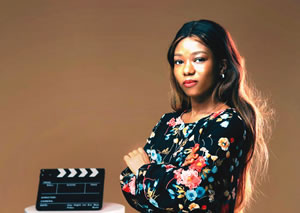 From creating a unique brand for herself as a script writer of in Nollywood with notable movies to her credit, Bunmi Ajakaiye is also fast emerging as one of the trail-blazing movie directors in the industry. Ajakaiye who likes to tell the stories of African women says she is not swayed by the attention her work is bringing to her. She speaks with SEGUN ADEBAYO about her rising career.

You are regarded as one of the fast-rising script writers and movie directors currently changing the face of Nollywood, but you hardly put your face or name out in media space despite all the work you do. Is this deliberate?

I have heard people tell me this all the time but I really don’t think it’s deliberate. I’m old-fashioned, so I believe in working hard and letting the work talk for me. I’m a firm believer in hard work. I spent all these years honing my skills and making my mistakes quietly. The noise that sometimes comes with progress and success can be detrimental to growth, so I had to remain focused.

Being behind the camera was a choice; it meant not being in the spotlight by design. It is true that on this job, your “face” is your work. Fortunately, those who know me or those who want to give me jobs always know where to find me despite the absence of publicity around me.

How did you get into script writing and what prepared you for this life?

My very first screen writing teacher was the late Amaka Igwe. When I met her, she told me I had something and that was all I needed to keep practising. In Nollywood, nothing really prepares you for a life in acting. You just jump into the deep end and hope you survive it in the long run.

So how did meeting Amaka Igwe help you through?

She actually held a training in her Ikeja studio that year and I was the first to get there on the first day. That was how it all started.

What comes to your mind when you want to write a script; does the money you intend to make at the end of the job motivate you?

Initially I just wanted to write and get better at it but on this job, for me, when you are earning your stripes, it doesn’t matter what you get paid. Later on when I grew more confident, of course the motivation was where the output of the story was going to be; cinema, online or terrestrial TV. Those factors will eventually determine how you charge

In developed countries script writers earn a fortune from just a movie. Are you not worried about what you get paid?

Without shying away from the truth, in this part of the world, our ecosystem has simply not evolved to that point where you can charge people the way it is done outside of our clime. So for me, I think comparing us to the West is a little unbalanced. We just have to be truthful to ourselves.

The African movie market is booming with new opportunities and stakeholders are raising the stakes and striking big deals with multi-national companies who are willing to invest in their projects. Nollywood movies on the other hand are being hosted on Netflix, isn’t that a pointer to the fact that it is time to embrace the new order?

The dream is to write one movie that will pay you the kind of money that could sustain you for a long period but our industry is not set up like that.

How do you feel about this growth; some years back writers and movie-makers don’t have this opportunity for their works to grace the big stage?

Those platforms are looking to work with the best of the best. So one has to be really good and be in the ideal position to appeal to such platforms.

Does it come with added pressure knowing that you have to raise your game or be left behind?

You are absolutely right if you say it comes with the pressure. The pressure is ever present. I don’t think it ever leaves one as a true creative. Personally I always want to be better. I go over dialogue repeatedly till it is perfect and even then it’s still not perfect enough for me.

Seeing how actors and actresses are attracting opportunities because they are regular faces on screens, have you ever felt the urge to come before the camera for once?

I can honestly tell you that I have never felt the urge to be in front of the camera. What many people don’t know is that being an actor is not an easy thing to do at all. When I was younger I wanted to be a Yoruba film actor. It’s funny now that I think about it.

So you can’t interpret the script you wrote if the need arises?

I think that’s a skill I haven’t paid attention to. Acting is a very technical thing to do. It’s not just about knowing how to speak clearly; it’s a repetitive job that requires you to lay your emotions bare or keep it on standby. You could be crying one minute and celebrating in the next scene. It’s not easy and I applaud actors. I’ve done what we normally refer to as “waka pass” before where they needed people to sit and make the scene look fuller but that’s usually in my films. I call action and rush to sit in the crowd.

How would you describe your rise in the industry now that you don’t just write the scripts but direct movies; where do you think your career is headed at this time?

My journey in the industry has largely been methodical.  I have had to learn every skill I have now in order to be good at it and that took years. As a writer, I think there are no limits; once you are blessed with ideas and you don’t experience a dry spell, the sky is the limit. Directing on the other hand is much more different. For many years, I trained as an editor. This is the point where we fix all the problems that occurred on set. It’s like a peek behind the curtain. So at one point, I was at the beginning of the film process as a writer and I was also at the end as an editor. It’s very interesting to see the end and also know the beginning. I just wanted to have some set experience so I researched what assistant directing was and convinced some people to give me a chance

Which movie earned you your directorial debut?

That should be About Your Husband in 2015. It was for Closer pictures produced by Uduak Isong.

From 2015 till now, you have become a rising phenomenon in the game; a pointer to this is the movie you directed, Smart Money Women, which has been trending on Netflix for sometime now. How did you achieve that feat?

Smart Money Woman came as a challenge to me. The book was a best seller and when I was approached for it, I didn’t want to let the readers down. I didn’t know what is in their imagination but I was committed to surpassing their expectations. I am happy that the movie is doing fine on Netflix and people are rating the work of the director. It was a beautiful experience. It was actually my first book adaptation. Working with Arese Ugwu, who wrote the book and also executive-produced the series was also different because the writers are hardly present during principal photography.  I prepared seriously because there are five women who are very different who also needed to be portrayed in a unique fashion.

The movie is enjoying massive streaming on Netflix, how long did it take to shoot the movie and what was the experience like?

It was very interesting. Everything was on the line. My ability to capture a book that people had read across Africa was definitely pushed. Luckily I had the best crew who supported me on the shoot. They are the real stars of what we do. They make it easy.

I shared my vision with my DP, Femi Awojide and he delivered the picture I had in mind. It’s a TV series actually. It took a month to complete principal photography

How prepared are you to take this to a new level now that you are getting a lot of attention?

I’ve always been a fan of new challenges. Once I start to feel uncomfortable, it means it’s time to grow and move out of that comfort zone. I’m very much excited to see what’s on the horizon and meet it with even more determination and focus than before, with God’s help.

You are pretty lady; it will not be out of place to have torrents of advances from the opposite sex. How do you deal with them?

Honestly it has been God that has been helping me to decipher who is genuine or not, you have to ask God to guide you. He keeps guiding me always.

Nigeria at 61: ‘These are dark times but we shall overcome’

Why I ventured into movie production —Foluso Lala

Beauty is not about aesthetics —Nashaira Belisa