I used my colleague’s phone number in kidnap threat letter because he demanded I paid back his N20,000 —Man arrested for writing kidnap notice to varsity, bank in Oyo 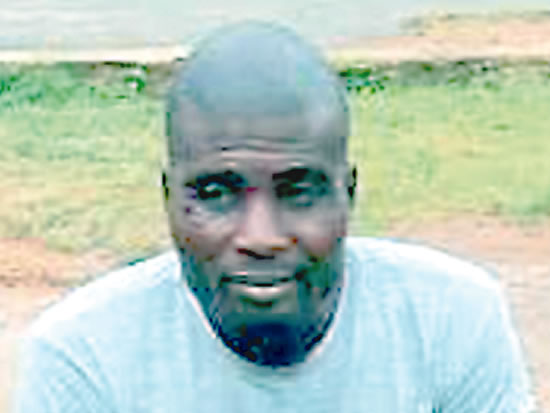 Olarinde was on Monday shown to journalists at a press briefing after his arrest by the Oyo State Police Command’s Monitoring Unit last weekend.

The arrest was prompted by  a handwritten letter of threat found by the management of a private university in Atiba, Oyo town on August 11. The content of the letter read that the institution should pay a ransom of N10 million or have three students of the school kidnapped.

The letter further warned that a report to the police, Amotekun Corps or other security agencies would not stop the mission from being accomplished.

Saturday Tribune learnt that at the back of the threat letter, a map showing Oyo Town with the location of the university marked out was displayed. A mobile phone number was put in the letter to be contacted for ransom negotiation.

This, it was learnt, made the school management, led by a Professor (name withheld) to report the threat to Ojongbodu police station. The letter was also sent to the DSS and Amotekun.

Saturday Tribune further gathered that on hearing about the threat letter, parents started picking their children because of fear of their being kidnap victims, especially with what occurred recently in Ogbomoso. This was said to have led to the collapse of school activities.

Not done, the writer sent a similar handwritten letter to the branch office of an old generation bank at Owode area of Oyo town on Saturday, August 13, informing it of a planned robbery attack on Monday, August 15 if a ransom was not paid. The writer said that he and his gang would be coming with sophisticated weapons and bombs that could not be stopped by police or other security agents if they were called. And the bike rider’s phone number was also put there for ransom negotiation.

It was gathered that when the state Commissioner of Police, Adebowale Williams, heard about the threat letter to the university he reportedly directed that security be beefed up in the university with operatives from the Anti-Kidnapping Squad (AKS), Monitoring Unit and other tactical units drafted there. The police commissioner also specifically detailed the Monitoring Unit to hunt for those behind the letter.

The Monitoring Unit led by its commander, CSP Olusola Aremu, was said to have promptly swung into auction on August 12 and went to Oyo town.

Based on discreet investigation and networking, the person whose number was put in the threat letter was picked up, and was discovered to be a commercial motorcyclist, identified as Azeez Mufutau. He was said to have been moved to Ibadan from Oyo town immediately where the investigation continued.

When interrogated, Mufutau’s statement turned useful to the police leading the Monitoring Unit’s commander and his men back to Oyo on August 14. There, they got the suspected writer of the threat letter, Olarinde.

Findings by the police revealed that the okada man and Olarinde knew each other and were involved in a hire purchase dealer, in Olarinde was the link who helped the other okadaman to purchase a motorcycle on hire-purchase.

After the okada rider Mufutau finished paying in instalments, he reportedly asked for all documents of the bike from the owner but was told that it remained N45,000 before he would be given the documents. That was how he discovered that Olarinde had converted his money to private use instead of paying the owner of the motorcycle.

In the desire to get his documents, he gave N20,000 out of N45,000 to the seller and appealed to him to release the documents since they all knew what Olarinde did, and which he did not deny, with a promise by Olarinde to refund the N20,000 to him.

However, the suspect reportedly refused to pay as Mufutau kept asking for his money. That made Mufutau to tell him that he would report the fraudulent act to the police, which Saturday Tribune learnt he did at Ojongbodu police station in the night of August 11, but was told to come back the following day to write his statement.

When interrogated after his arrest, Olarinde confessed to being the writer of the letter but said he only wanted to put the okada man in trouble so that he would not be able to ask for the N20,000 when locked up in police cell or in prison.

The suspect told Saturday Tribune in an interview: “I’m an Ibadan indigene but living in Oyo town. I am an okada rider and used to help bike owners to sell to intending buyers which would yield me a token.

“It is true I wrote a threat letter to the university and the bank, putting the phone number of an okada rider, Mufutau whom I call Akinmoorin because that is where he lives.”

What led to feud between us

“I was introduced to Mufutau by a mechanic who told me he needed a motorcycle to purchase and pay in instalments. I eventually got one Bajaj motorcycle and brought it to him but he said it was too expensive. I gave him the one I was riding and took over the new one I brought.

“About a month later, the new bike was stolen from my house. Three other motorcycles were lost to thieves by me at that time and I was in debt of over a million naira. So I was using the money being paid for motorcycles purchased through me to pay part of the debts I owed.

“When Mufutau completed his payment but was told he was still owing N45,000, he came to me and I told him that I used part of his payment, saying I would tell the owner. That was when he started shouting at me and saying that he would report me to the police. That was what made me to decide to put him in trouble. As the Yoruba proverb says ‘kaka k’adiye da mi loogun nu, maa fo e leyin ‘ (before a hen destroys my pot of medication, I will break her eggs), I decided to write those letters and inserted his phone number to make it look like he wrote them, so that he would be locked up and not able to think of asking me for his N20,000.

“I dropped the letter by the fence of the university and the bank early in the morning so as not to be detected.

I didn’t write he letters because I was owing people. I just wanted to punish the okada rider for coming down hard on me because of the money I wanted to pay him.

“I had done the act before I realised that it was very, very wrong. None of my family members, including my wife, knew about what I did. I have never done such a thing in my life.”

“I just want to apologise to the government, the okada rider and everyone that I have offended through lack of reasoning. It was when I was picked that I knew the weight of what I did. I plead to Nigerians, the whole of Oyo State and the ancient town of Oyo that they should forgive me. My wife is heavily pregnant and will deliver any day from now. I don’t want to be away from her.”

Stories of suspected robbers: How we operated across Ogun, Oyo, Lagos