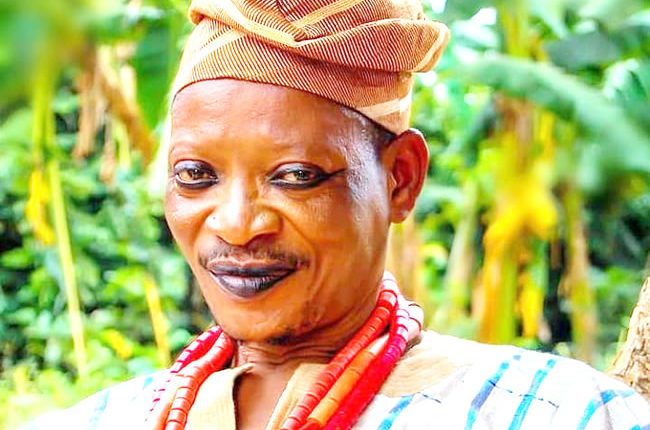 Building a career and maintaining relevance despite the change in times is not a walk in the park. However, veteran actor Fatai Adekunle Odua, otherwise known as Lalude has proven that it is possible. In this interview with
Segun Adebayo, he speaks on his journey to stardom, his role as one of the pioneer theatre practitioners and his recent venture into skit-making.

How long have you been in the theatre business?

It’s been 51 years since I started. The journey actually started in 1970, which was the year I made my debut. From that time till now, when I look back to how far I have come, I feel grateful to God. I am more thankful as I recall that others who started with me are no more. Staying relevant till this time is not by my ability; it has only been by God’s grace.

You are known for roles that portray you as a traditionalist. You have played this role for years. How did you fall in love with it?

Back in the day in Lagos, we had a theatre house not too far from where I lived. Actors gathered to practise in the evenings, whenever they were practising I would go there to see what they were doing. One day, the person that was supposed to play the role of a priest wasn’t around, so they asked me to replace him and I did. That was what birthed my journey into theatre arts.

When you were asked to play the role, what gave you the confidence you could do it?

It had nothing to do with confidence, I had been watching them for a while, and I enjoyed what they were doing. That was why I joined them.

Many people know you as Lalude; where did the name originate from?

We were at the National Theatre for rehearsals one day and our then chairman, Yinka Quadri asked me what name I would like to adopt as my stage name, and I told him I preferred Lalude. I wasn’t given that name on the job. I gave myself the name. I was born as Fatai Adekunle Adetayo, but when I wanted to venture into theatre business, I gave myself the name Lalude.

You have been in this business for a long time but you keep looking younger by the day. What’s the secret?

I have heard people ask me this question often times but it baffles me that they don’t believe there is no secret to looking young. As far as I am concerned, there’s no secret, the only thing I do is to take good care of myself and my health, so if you want to look young like me at my age, take extra care of your health.

Having made a name for yourself through your numerous roles and also gaining a lot of recognition and awards for it, how do you feel about the achievements you’ve recorded so far?

I am thankful for how far I’ve come, if I want to count the awards I’ve received from this job, we’ll be talking about more than 40 of them. So all I can say is that I’m grateful for all the good things God has done for me.

Looking back to those days and comparing it with these days, which one do you prefer most?

I prefer this present day because many things have changed, the monetary value of the pay we got those days can’t be compared to these days. In those days, I could be the only one to be casted for the same role in 21 movies and for a very meager sum of money.  I remember I was the highest paid actor in those days; comparing it to these days, things are better, the pay is better.

How long have you lived in Ibadan?

What brought you to Ibadan?

I had a set of twins in Ibadan and instead of taking them with me to Lagos, I decided that we should all stay in Ibadan.

Were you told at any point in your life that you would venture into Theatre Arts?

Not at all, my father wanted me to be a Magistrate, I never would have believed it if I was told that I would end up as an actor, and what this means is that no man controls his destiny; it is God that controls our destiny.

Are any of your children going to walk in your footsteps?

Definitely.  All my children, both male and female are going to follow my footsteps and go into acting; I’m already working on training them for the job.  It is the joy of every father to leave a legacy that should be carried on to the next generation and because my legacy must live on, I am working towards teaching them all that I know.

People who have watched you over time have developed a sort of fear for you because they feel that you possess some powers. What is your reaction to this?

I don’t possess any power; it is God who possesses all powers. I am just acting based on the roles given to me. Everything ends on set because in most cases, you can’t possess the same ability that you have on set in real life. Acting is about bringing a character to life and if you want the people to see the realness of your work, you have to do it very well. So those who say I have spiritual powers as it is portrayed in movies should be careful what they wish for.

Do you sometimes feel like you have that power?

No, it has never crossed my mind. Like I said, I’m an actor, and I play my role to the best of my ability.

What was your reaction when you were first approached by skit makers to feature in their skit?

I was working on a project one day and I received a call from Oluwadolarz, who told me he wanted to feature me in a skit.

What did you understand about skits at that time?

I have seen them making skits for some time and I see how people appreciate what they do on social media. So, when the call came from Ola, I was excited to be part of his project. Much later, Mr Macaroni also spoke to me. And, from our conversation, I discovered that one could earn more money from shooting one scene in skits than when you shoot 10 scenes in movies.

Would you choose skit making over movie making now that you know one pays better?

I am not going to deny the fact that skit making producers pay well but don’t forget that it is just an arm of acting. My soul, body and heart are in acting. Of course, you can’t trade passion for money; it has always been like that and I don’t think anything can take the place of acting in my heart.

Is it true that you are fortified with some mystical power that scares people; some people described you as a strong man? What’s your reaction to this?

You know people like to just draw conclusions hastily without finding out the truth from the person in question. I am not what people think I am. I am an actor who gives his very best to his craft. I don’t have any mysterious power that could make people disappear or appear anywhere. It is all about the arts.

But I learnt that people fear you in your neighborhood…

People fear me? I am hearing this for the first time.

Yes, they said you possess some strange powers…

Who gave me the power? Were they present when the power was being given to me? Have they ever seen me display such powers in their presence or attacked anyone with any power? One thing that I know is that not everybody who wants to get close to you has a genuine intention; some people are full of evil and wickedness. So, if you decide to stay away from those people or you know how to handle such people, they will say you are using one power or another thing.

How did you know so much about incantations that you deploy them easily in movies?

It is funny that I didn’t even learn how to use incantation from anyone. Before now, I used to write them down and study it line by line but after a while I mastered it so well that I don’t need any script to get into my character when it comes to playing my role.

Have you ever got into trouble with people who tried to test if you have real powers?

It can happen to anybody. You don’t have to be a theatre person to experience such in real life. Some people will want to know the source of your power and try to provoke you. But the beautiful thing about life is that if you don’t wish evil on anybody, no evil will come to you. Even when people try to hurt you, they end up harming themselves.

So you are saying that you don’t have this power or you don’t hurt people with it?

You really want to know if I possess some powers. What I will tell you is that what you don’t want anybody to do to you, don’t do it to others. I think that settles it. Even God says love your neighbour as yourself. The greatest sin is to hurt your neighbour who has done nothing wrong to you. God frowns on such.

What is your perception of the movie industry now and its expansion?

Some years back, nobody could ever believe that industry would turn out this way to the extent that new innovations brought about by the social media would add so much value to our job. Those days, nobody knew there would be a better way of shooting movies or that there would be anything like skit making.

Oritsejafor: A fiery ‘defender of faith’