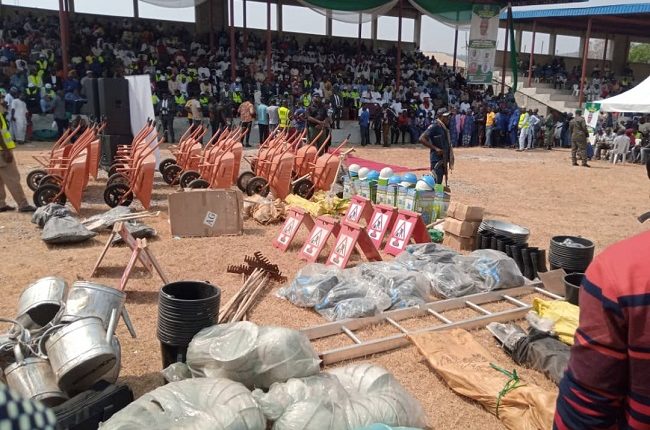 Bello while speaking at the flagging off ceremony on Saturday praised President Buhari for its decision to introduce the Project for 774,000 Nigerians across the federation.

He said the decision to introduce the programme was to make ordinary Nigerians feel government impact in every little way.

While charging the 21, 000 beneficiaries in the state to take advantage of the opportunity afforded them by the programme by improving themselves through skills acquisition to be self sufficient and self reliant, Bello noted that his administration was passionate about the same thing, restating his commitment to support the President in any way that would make life meaningful for the people of the country.

He lamented on the attitude of some people around the seat of nation’s power who are known for sabotaging the good intention of President Bubari at making life better for the people of the country.

The used the example of the programme which was pronounced by the President more than a year ago as an example, and called for the need for the elites in the country to put the people ahead of their selfish interest.

He paid a special tribute to the deceased Attah Igala, Michael Ameh Oboni II who was a member of the state selection committee and observed a minute’s silence in his honour and prayed for peaceful repose of his soul.

Speaking earlier, the minister of State for the Federal Capital Territory (FCT), Hajiya Ramatu Tijani lauded the initiative by the Buhari administration, describing it as a step taken to address biting unemployment and poverty in the country.

She praised Governor Bello for his pragmatism towards government and efforts to address socioeconomic challenges being faced in the state and called on the citizens to take up of skills that would make them self employed.

In his opening remarks, the Acting Director General, National Directorate of Employment (NDE), Mallam Abubakar Nuhu Fikpo, described the programme as a very significant step in Nigeria’s quest to win the war against mass unemployment.

“As the apex job creation agency of the Federal Government of Nigeria, the National Directorate of Employment (NDE) in the last three decades has remained in the fore front in the fight against poverty and joblessness.

“One of the core mandates of the NDE is the exploration and promotion of the job creation potentias available within the public works sector. Distinguished Guests, ladies and gentlemen, permit me therefore to reiterate the fact that the labour absorptive capacity of the public works sector makes it a very Crucial vehicle in the Job creation process and maintenance of publuc infrastructure,” he noted.

On his part, the chairman of the state selection committee, Hon Raji Afolabi had applauded the federal government and the state for their commitment to making life better for citizens, noting that the programme would go a long way in improving the socioeconomic wellbeing of the beneficiaries.

The British Parliament at the Westminster Hall held a debate on ‘e-petition 554150, relating to Nigeria and the sanctions regime’ on Monday. The government of the United Kingdom has however responded…Gov Bello flags off  Gov Bello flags off

The surprise visit made on Friday night by the leaders of the ruling All Progressives Congress (APC) to former President Goodluck Jonathan at his residence in Abuja triggered a stir in the major political camps, resulting in at least four possible theories..Gov Bello flags off  Gov Bello flags off