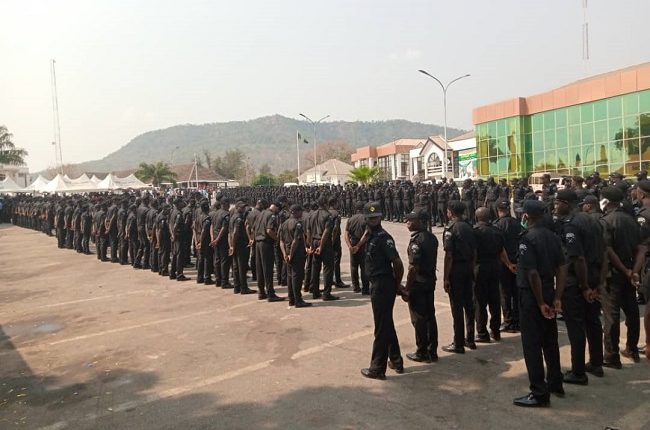 Kogi State Governor, Alhaji Yahaya Bello has warned the newly commissioned 441 Special Police Constabulary personnel against actions that can jeopardize security and safety in the state.

The Governor who received the state 441 Police Constabulary at the Government House in Lokoja over the weekend charged them to ensure that every inch of their locality was duly secured and accounted for.

Governor Bello appreciated President Muhammadu Buhari and several other security stakeholders for initiating such community-focused program which was an indication of their respective agenda for a secured country.

The Governor noted that his administration inherited a volatile state which in the first term of his administration have experienced a positive change as Kogi remained the most secured in the country adding that he didn’t hesitate to maximally seize the opportunity that provided itself to enlist more men.

He stressed that his administration further increased the initial 16 per local government representative to 21 to further create room for more personnel and increase employment opportunity in these respecting LGAs.

The Governor urged them to expand their networks into their respective community and also work with the various security agencies, executive chairmen and other stakeholders to provide the needed logistics and reliable information to forestall any security threats and unravel events when required.

Governor Bello assured the constabularies of the state’s commitment to their prompt remuneration and welfare charging them to ensure that they abide with laws and orders of their establishment and stick strictly to their assigned responsibilities.

He expressed that the State Government would continue to facilitate more training for them that would further expose them to modern security tactics while it would also establish the modalities for appraisal and reward good performances.

Commissioner of Police, Kogi State, Mr Ede Ayuba in his remarks, lauded the governor for his continued efforts towards delivering a safe and secured Kogi State as well as his several investments in facilitating modern security architecture in the state.

He placed on record that the state government took responsibility for the logistics, accommodation and clothing of the constabularies while in training aside from several other efforts it had previously made

The State Commissioner, however, charged the Constabularies to perform their duties as professionals as they made sure that they remained neutral and dedicated to the cause of their assignment.

The surprise visit made on Friday night by the leaders of the ruling All Progressives Congress (APC) to former President Goodluck Jonathan at his residence in Abuja triggered a stir in the major political camps, resulting in at least four possible theories..Gov Bello warns newly  Gov Bello warns newly