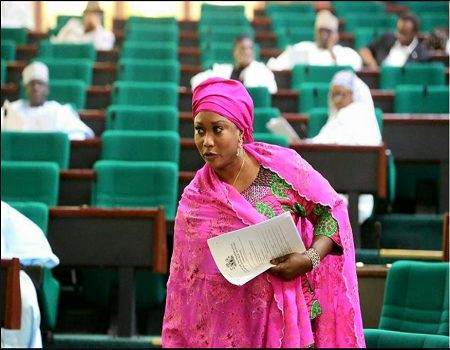 Opposition Peoples Democratic Party (PDP) in Gombe State has declared that it will continue to grow stronger and more popular despite the discriminatory treatment of the ruling All Progressive Congress (APC) on it and its members recently.

A chieftain of the party in the state, Binta Bello who once represent the party as a member of the House of Reps said that the APC led government was afraid of the popularity the PDP is now gaining because it was the PDP that laid the foundation for the development of Gombe State for the past sixteen years.

According to her, the idea behind calling the members together was for them to understand and encourage each other as well as show the world that PDP is fully grounded in Gombe State.

“We are fully grounded in all nook and crannies of Gombe State, we don’t know any other party than PDP and we are going to make meaningful opposition because we taught them politics”, Hon Binta boasted.

The State Party Chairman, Mr Joel Jagafa, who was among many others that spoke at the event thanked the members for sticking with the PDP despite the loss in the 2019 election.

He said PDP remains the backbone of development in the State because they have a lot to show. He challenged anyone to come out and say the contrary.

In his address, immediate past Governor of the State, Ibrahim Hassan Dankwambo, who was represented by his Deputy, Mr Charles Iliya, urged members to remain united.

While expressing optimism that the PDP will bounce back to victory in 2023, Dankwambo urged members to make meaningful contributions for the party and not just because of contesting election only.

The PDP had sought the use of the State-owned Gombe International Hotel for its enlarged meeting but alleged that it was denied the use of the public facility at the last minute on the orders of Governor Muhammed Inuwa Yahaya.

The meeting was convened by Hon Binta Bello, immediate past Rep member for Kaltungo/Shongom Federal Constituency and brought together all those that made up the cabinet in the administration of the immediate past Governor of the State, Ibrahim Hassan Dankwambo, among many other top-notch of the party in the Northeast. The event was held at its Secretariat after the failed bid to secure the International Hotel.

Bauchi will bounce back in spite of challenges of the past, Bauchi Speaker declares