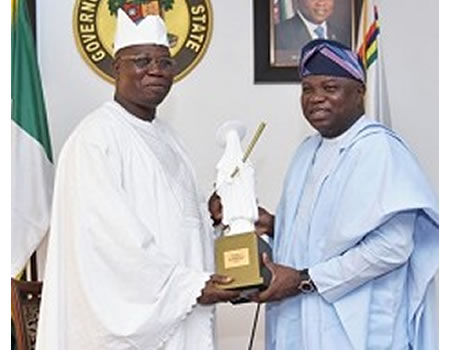 The Aare Ona Kakanfo designate, Otunba Gani Adams, on Tuesday paid a courtesy visit to the Lagos State governor, Mr. Akinwunmi Ambode, at the Lagos House in Alausa Ikeja, where he commended his role in the political and economic integration of the South West region.

Adams said he was in Lagos to pay homage as well as invite Governor Ambode to his installation scheduled for January 13, alluding to the fact that the governor since assumption of office had taken the growth of the South West region to heart.

“I want to thank you for your role in the South West integration. I believe that Lagos is South West even though it’s the commercial nerve centre of Nigeria. In your own tenure, I have realised that you are more interested in the integration of the South West and we are Yorubas no matter where we come from, thank you so much for that,” Adams said.

The Aare Ona Kakanfo designate equally lauded Governor Ambode, noting that it was in his tenure that Lagos joined the Oodua Investment Group, an initiative tailored towards expanding the economic integration of the South West region.

“I have realised that in your own tenure, you clearly came out to support Oòduà Investment. So, its important for any governor of Lagos State to support the group, because about 50 to 60 per cent of Oodua Investment is in Lagos and as the number one citizen and Chief Security Officer, its a good direction and God will bless you for that,” Adams said.

Speaking further, Adams commended the developmental strides in Lagos, said Governor Ambode in the last two and half years, saying he had succeeded in giving the state a major facelift and bringing about appreciable level of progress across the state.

“I am so particular about the Light up Lagos. If I am driving from the Island anytime from 8pm, I always ask my Chief of Staff or driver if we are in Europe or we are still in Nigeria or the same Lagos that we are living before?

“I think that anyone that gives light, gives life, by giving light to Lagos State, you are giving life to Lagos State and the more you keep on lighting up Lagos, God will continue to develop Lagos State,” he said.

Adams equally said his visit to Lagos House was to establish a relationship with the state government, even as recalled that the sage, Chief Obafemi Awolowo, had once said that there was no permanent enemy or permanent friend in politics.

“Chief Obafemi Awolowo said that there is no permanent enemy or permanent friend in politics. No matter anything that has happened, I want to build a relationship with you, personally, with the Lagos State government and with the people of Lagos,” the Aare Ona Kakanfo Designate said.

Responding, Governor Ambode said Lagos over the years had remained the heartbeat of the future of the Yoruba race, assuring that no stone would be left unturned to engender South West integration as well as preserve its rich heritage and culture.

He said his administration remained firmly committed to the economic and political integration of the South West and would continue to support initiatives towards its success.

Congratulating the Aare Ona Kakanfo designate, Governor Ambode said the title was one of the most significant in the Yoruba culture, noting that the emergence of Otunba Adams clearly showed that the economic integration and political cohesion of the South West region was on course.

He described the visit as not ordinary, but significant for us, saying that the state government was in full support of ascension of Otunba Adams to the title, Aare Ona Kakanfo.

According to Governor Ambode, what the state government is trying to do on the occasion of the visit is to say that the Yoruba culture and the Yoruba heritage must not be left in tatters.

“This visit is not ordinary, it’s significant for us. It also shows that we are embodiment of the Yoruba heritage. We support fully, the ascension of the title, Aare Ona Kakanfo in the person of Otunba Gani Adams. What the State Government is trying to do this morning is to say that the Yoruba culture and the Yoruba heritage must not be left in tatters and just as he has said, this title is one of the most significant titles that actually bind the Yoruba culture together.

“So for us, for Otunba Gani Adams to have been so chosen divinely as the next Aare Ona Kakanfo, it shows that what we have been speaking about the economic integration and the political cohesion of the Yoruba race is in good hands,” the governor said.

While thanking the Alaafin of Oyo, Oba Lamidi Adeyemi 111 for choosing Adams as the 15th Aare Ona Kakanfo of Yorubaland, Governor Ambode said the title came with some deference, authority and responsibility, assuring Otunba Adams that the state government would offer support to make his tenure a success.

“We as a government, beyond the fact that we would support you, we would also put you in prayers that whatever the responsibility is, God in his infinite mercies will support you; you would  be the most successful Aare Ona Kakanfo that the Yoruba race has ever had. Because we are involved, we would make sure that everything that has to do with the Yoruba heritage, everything that has to do with the Yoruba culture, we would protect with all our heart,” Governor Ambode said.