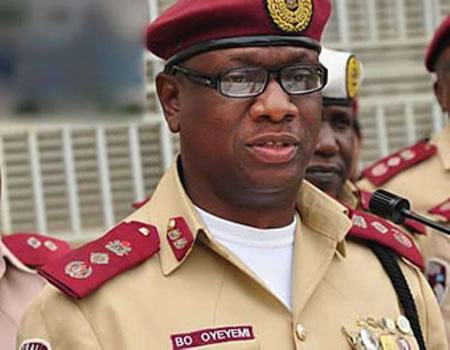 The Federal Road Safety Corps (FRSC) says it will present the issue of axel load violation by motorists in the next Federal Executive Council Meeting.

He said that most fuel tankers drivers plying Nigeria roads were in the habit of carrying 60,000 litres against the approved standard 33,000 litres thereby putting additional pressure on the roads.

“You will also see most trailer drivers carrying 900 to 1000 bags of cement when the approved standard is 600.

“We are appealing to commuters to comply with axle load rules because this is one of the major problems we are experiencing on our highway.

“Overloading the trucks makes them to breakdown on highways and such development usually results to traffic gridlock on our major roads,” he said.

He said that most vehicles have been diverted to Ilesha/Akure/Owo/Ikare enroute Okene, and urged motorists to be patient.

He said that 90 per cent of trucks plying Nigeria roads were over 30 years old, and urged the owners of such trucks to renew them against breakdown on highways.

Similarly, Sylvester Jijingi, Director, Highways Design and Bridge, Federal Ministry of Power, Works, and Housing, disclosed that the temporary and permanent bridges to be constructed will cost N2.5 billion.

Mr Salimo Bataiye, National Chairman of Petroleum Tankers Drivers, called on the Federal Government to complete the temporary bridge to enable its members deliver on their products within the stipulated period.

He explained that the Petroleum Equalisation Fund mandated its members to deliver their products within 10 days, adding that if such deadline was not met, the drivers would not be paid and it could lead to national crisis.

Bataiye, however, advised the Federal Government to declare a state of emergency on all federal roads.

Mr Akim Abimbola, one of the tankers drivers, decried the neglect of Mokwa/Jebba road by the Federal Government for so long, and called for immediate rehabilitation of the road to ease movement of vehicles.

“I have been stranded here for five days now, I had to borrow money to enable me eat because the bread we used to buy for N50 is now sold for N100.

“Though, I heard about the collapsed bridge, but I didn’t know that it was worst like this until I got here.

“I insisted on following this road because it is the shortest route between the North and West,” Abimbola told NAN.

Another tankers driver, Malam Adamu Aliyu, appealed for timely completion of the temporary bridge to facilitate the movement of stranded vehicles.

“I came from Pleatau state, I have been stranded here for 11 days now and I cannot turn back to follow Minna/Suleja because the road is not good too.

“I had to sell my cell phone to enable me buy Gari and kuli-kuli to drink because the food here is expensive and I cannot afford it.

“Please government should help us fix the road because we don’t have any other business doing aside driving tankers,” he said.

Another commuter, Mrs Grace Afolabi, appealed to the contractor handling the project to allow stranded articulated vehicles to pass through so as to avoid further delay.

“I have been stranded here for four days with my good, the money I had with me is finished because I have been buying expensive food since I got here.

“My husband, children and customers have been calling me because they are worried, I am begging government to come to our aid,” she said.

Earlier, the Acting President Yemi Osinbajo inspected the collapsed bridge and promised that the temporary bridge would be completed within two weeks.