Fracture: Why your cast itches –Expert

Children easily get their bones fractured from a fall. In this report by Sade Oguntola, experts say without having a cast on a broken bone, or properly caring for a cast, the bone could quite possibly heal incorrectly; be more painful, and require a longer healing period. 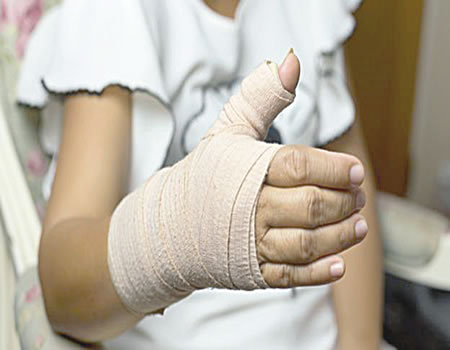 WE  often remember childhood as a time when life seemed infinite and adventures in the backyard felt expansive. Climbing a tree to pluck fruits, learning to ride a bicycle or playing football was an adventure. Of course, sometimes falls occur. But that’s to be expected – there’s a risk in every journey of discovery.

Fall could be a potential cause of injuries in children. Young children are particularly at risk of bumps, bruises and broken bones from adventure. The older ones are not exempted either from an aggressive tackle or during missed kicks when playing football.

Even children sometimes fall prey of road accidents. A great number of these road traffic accidents result from unguarded children hit by motor vehicles while crossing the road. Some fell from various heights at home, school, or on the farm sustaining a bone fracture.

“Children do have fractures because their bones are generally not as strong as adults. They do not appreciate risks while running or playing. Of course, it is the playing that actually develops their muscles and bones. But during that play, they may fall and break their bone,” said Professor Segun Ogunlade, a consultant orthopaedic surgeon at the University College Hospital (UCH), Ibadan.

So, many parents, over the course of their parenting career, need to care for a child with a cast on because of a broken leg or arm. Though very important to the healing process, casts can be uncomfortable to wear and difficult to care for.

Professor Ogunlade, added, “most of the time, their fracture does not necessarily need open surgery. So their fracture will need to be manipulated and a cast applied.

“Now, casting in children is very important because a wrong cast or a poorly managed cast can lead to a disastrous result. In fact, we have seen children’s hands that had to be amputated because of a wrong cast.”

A plaster cast immobilises the bone above and/or below the joint nearest to the injury. Its main benefit is the ability to mould it into a shape that offers better support while the bone heals.

On average, plaster casts stay on for about six weeks, depending on the age, general health and type of fracture.

However, it is imperative to the healing of the broken bone that the cast is properly taken care for while maintaining maximum comfort for the child.

According to Professor Ogunlade, of greatest importance, is ensuring that the cast be applied by a competent person.

“When a child has a fracture, the affected hand or leg is swollen. You do not apply a full cast, but only apply a slab until this swelling has gone down,” he added.

Even when the cast is applied, he said that it must be tight and with instructions to the parents both in the verbal and written form on how to care for the cast.

Professor Ogunlade declared a child with a complaint of pain around the area with the cast should be returned back immediately to the hospital.

He added peradventure the affected area with the cast turns blue, cold, severe swell, feels numb or becomes difficult to move or there is a burning or stinging sensation, such are not “normal” signs of healing and must be reported promptly to the hospital.

The expert said a child must not swim with the cast because it can get soaked. A soaked cast can become too heavy and drown the child.

In addition, in having a bath, water must not enter the cast because it can become soggy, making the skin in the injured areas to start to peel off.

A plaster cast is made up of a bandage and a hard covering, usually plaster of Paris and it may disintegrate if it gets wet. Also, getting water inside the cast can cause an infection and promote mould growth.

Signs of an infection underneath a cast include pain, swelling, a burning sensation, light headedness, excessive sweating, discolouration or fever.

Often times, children with cast tend to hide their money, pencils and even coins in it. This, he said must be discouraged because it can cause an infection that can affect the healing process as well as more discomfort. If something presses on the skin for too long, it can cause scarring.

In the situation, where the child complains of itching or something moving in the cast, he said parents must not apply powder or spray it with insecticide to relief the itching, thinking it is due to a bed bug that is hidden inside it.

According to him, “When they feel anything moving, it is not a bedbug. We have even seen adults applying Baygun insecticide spray under the cast to kill supposed bedbugs. It is the sweat that is not dry that is moving over the skin. Especially during the hot weather, people tend to sweat under the cast.”

Doing any of these actions can damage not only the integrity of the cast but can also cause other injuries and irritations underneath the area of the cast.

If the cast smells rotten or mouldy, it may be a sign of infection, or there may be a problem with the cast. So, it important to have it checked at the hospital.

Also, it is important to avoid breaking off the edges of the cast or pulling out the padding even if its edge become ragged. Padding protects the child’s skin and must be kept intact to hold the fracture in place.

What’s more, a child should also avoid getting dirt in and around the cast. Dirt can damage the cast or cause damage or irritation to the skin underneath.

Moreover, he emphasised that a cast must not stay longer than it is necessary because this could cause stiffness of the nearby joint to the cast.

He added, “So when it is supposed to be removed, they should be returned to the hospital. Parents should not postpone it and let the child continues to suffer unnecessarily.”

Even once the plaster is removed, the bone is still healing so care should be taken for at least another month. Sometimes physiotherapy is needed to help recovery.

I’d love to visit WHO where health decisions are made —Nkasi Obim Nebo, health specialist and founder of PeachAid Medical Initiative