Tribune Business
By ChimaNwokoji On Oct 10, 2022 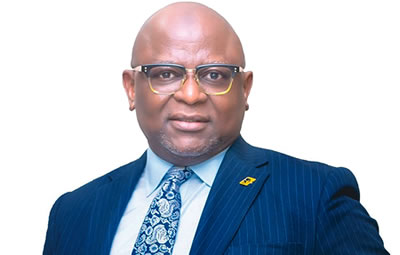 FirstBank has staged a comeback for greater and better times ahead. ChimaNwokoji writes on the outcome of its activities and unique growth trajectory.

EMERGING from a turbulent period last year, FirstBank has demonstrated that it is not only back on track but also, has shown convincing evidence that it is poised to dominate its course.

The awards and recognitions, a recent Fitch Ratings and The Banker awards are testimonials of FirstBank’s determination to remain at the top.

Most industry analysts believe that Fitch’s rerating of FirstBank aligns with ratings of other global agencies (such as S&P: B- with a stable outlook; Moodys: B2 with stable outlook) – a double confirmation of what industry peers already acknowledge – back to leading the pack.

The Bank and its CEO

First Bank under the leadership of Adesola Adeduntan, has ensured the lender keeps the trust of Nigerians gained over many years of its enduring legacy of safety and security.

The bank’s customer accounts have grown from about 10 million in 2015 to over 36 million (including digital wallets).

The bank is also the second-largest issuer of cards in Africa with over 11.8 million issued cards, and onboard over 18.6 million active customers on FirstBank’s digital banking platforms.

For Adeduntan, at the heart of an agile and resilient business is technology-enabled innovation that allows organisations to stay ahead of the curve.

“The banking industry is very dynamic,” he says in an article published by KPMG, a multinational professional services network, and one of the Big Four accounting organisations.

Adeduntun added, “No one knows precisely how the industry will evolve, but we do know that technology will continue to play a critical role. As an industry leader, we must remain innovative to stay ahead of the market.”

“Everything is about technology today; it is closely interwoven with our business. We see digital as an opportunity, an irreversible evolution. FirstBank was an early adopter and we continue to expand our digital frontiers, like embracing cloud solutions. In fact, for us, the rule for new solutions is ‘cloud first,” Adeduntun said.

Last month, Fitch Ratings upgraded the ratings of FBNH signifying its confidence in the financial conglomerate. According to Fitch in the rating statement, the upgrade of the Long-Term IDRs follows that of the VRs, reflecting that corporate governance irregularities publicly raised by the Central Bank of Nigeria (CBN) in April 2021, including two longstanding related-party exposures, have largely been addressed.

For FBN Holdings and First Bank PLC, the Viability Ratings (VR) were upgraded to ‘B’ from ‘B-’. ‘’Fitch equally upgraded the issuers’ National Long-Term Ratings to A (nga) from BBB (nga), reflecting their improved creditworthiness relative to that of other issuers in Nigeria’’ and highlighted the critical role of the following in its upgrade of both FBNHoldings and FirstBank’s ratings: A strong franchise; Improved asset quality;Healthy profitability; Improved capitalisation; Stable funding profile; ESG considerations.

The Top 100 African Bank Rankings 2022 recently released by The Banker Magazine from the stables of Financial Times shows FirstBank leading the Nigerian table in four areas, the highest achieved by any Nigerian bank.

The rankings, based on the end of year 31 December 2021 audited financials of all banks in the Top 100, reveal FirstBank’s ranking as number one in Nigeria in terms of: Overall Performance; Profitability; Efficiency and Return on Risk.

Stating that corporate governance issues have been addressed, Fitch said “according to management, the two related-party exposures highlighted by the CBN, which included equity and credit exposures to two companies of whom FBNH’s previous chairman was also chairman, have largely been disposed of and repaid.

“Fitch understands from management that FBNH and FBN have not been subject to penalties in relation to irregularities raised by the CBN in April 2021 and no further irregularities have been raised,” it stated.

The rating agency also noted that First Bank of Nigeria (FBN) the commercial arm of FBNH, impaired loans ratio has declined significantly to 5.6 per cent as at the end of the first half of 2022 from a peak of 25 per cent at the end of the 2018 financial year as a result of sizeable write-offs, successful restructurings and recoveries.

On the profitability, Fitch said “FBNH delivers healthy profitability, as indicated by an operating return on risk-weighted assets (RWAs) averaging 2.6 per cent over the past four years from four per cent in 2021, underpinned by large recoveries on a previously written-off loan. Earnings benefit from a low cost of funding and strong non-interest income but are constrained by a high cost-to-income ratio of 74 per cent in 2021 and significant loan impairment charges (LICs) in recent years.”

Asides this it said on funding, “FBN’s customer deposit base, which is 76 per cent of total funding at end- 1H22) comprises a high share of retail deposits (64 per cent at end-2021) and current and savings accounts (81 per cent at end-1H22), supporting funding stability and a low cost of funding. Depositor concentration is fairly low. Liquidity coverage is comfortable in local and foreign currencies.

The agency further explained, “FBNH’s and FBN’s Environmental Sustainability and Governance (ESG) Relevance Score for corporate governance has been changed to ‘3’ from ‘4’, reflecting our view that corporate governance irregularities publicly raised by the CBN have been addressed without penalty and therefore the factor is no longer relevant to their ratings.”

The rating note also pointed out the improved capitalisation of the holding company saying its “FCC ratio of 19.1 per cent as at end-H1, 2022 has been on an upward trend in recent years, as a result of strong internal capital generation, which has been influenced by a modest dividend payout ratio.

“Impaired loans net of specific loan loss allowances has declined as a share of FCC in recent years to a moderate 12 per cent at end-H1 2022. Pre-impairment operating profit is sizeable (an annualised 5.1 per cent of average gross loans in 1H22), providing a reasonable buffer to absorb LICs without affecting capital.

“FBNH’s and FBN’s ESG Relevance Score for corporate governance has been changed to ‘3’ from ‘4’, reflecting our view that corporate governance irregularities publicly raised by the CBN have been addressed without penalty and therefore the factor is no longer relevant to their ratings.

“Fitch has also upgraded the issuers’ National Long-Term Ratings to ‘A(nga)’ from ‘BBB(nga)’, reflecting their improved creditworthiness relative to that of other issuers in Nigeria.”

Commitment to Implementing its ESG Agenda

FirstBank is constantly working to deliver short and long-term value for our stakeholders by building a solid Environmental, Social and Governance (ESG) culture and continuously engaging with and communicating its activities to them. It is in this way that the Bank creates mutually beneficial business opportunities and outcomes for its stakeholders.

FirstBank’s long-term approach to sustainability includes minimising its direct and indirect impact on the environment. This has informed its efforts at conserving energy to reduce global warming by reducing our CO2 emissions, as well as conserving resources

With a standard Environmental Social and Governance Management System in place, FirstBank has been employing international best practice tools to manage risks in the lending process. For example, in H1 2022, over 2.2 trillion-naira worth of transactions were screened for ESG risks.

As part of its Climate initiative, FirstBank is partnering with National Conservation Foundation on the Green Recovery Nigeria (GRN) – an initiative which includes driving afforestation and reforestation.  Forest resources provide employment for two million people and tree planting is one of the most effective ways of tackling climate change caused by greenhouse gas.

FirstBank community development initiatives are anchored on its strategic pillar of Education, Health and Welfare. The FirstBank Corporate Responsibility &Sustainability (CR&S) week is a dedicated week that offers employees opportunities to give their time and resources to defined causes in line with FirstBank’s CR&S strategic approach. The Week’s activities are an aspect of FirstBank’s Employee Giving and Volunteering Programme, which was instituted with the aim of encouraging employees to give back to the community as well as inculcate in them the integral corporate culture of giving.

FirstBank held the maiden edition of the CR&S Week in 2017 with a focus mainly on Start Performing Acts of Random Kindness (SPARK) initiative. The initiative focuses on creating and reinforcing the attitude of going beyond just meeting the material needs of people, who are unable to help themselves, to showing compassion, empathy and civility.In 2022 CR&S week, the achievements include 30,000 underprivileged lives including women touched; 7million people reached with kindness message and 421 took kindness pledge partnering with over 80 NGOs and charities in over eight countries acrossSub -Sahara Africa and UK.

Euromoney Market Leaders also ranked the bank as Highly Regarded in Corporate Banking and Digital Solutions and Notable in SME Banking. Earlier this year been named Best Banking Digital Transformation Nigeria at the International Investor Awards 2022, in recognition of its continued efforts at reinventing its digital banking channels which have been central to reinforcing the Bank’s leading role in promoting a cashless society in the country whilst putting customers at an advantage in enjoying a secured and seamless digital banking experiences.

It was also recognised with the Best Bank in Nigeria 2022 award for its leadership role in promoting financial inclusion in Nigeria, which has been integral to improving lives and stimulating businesses of individuals across the country.

First Bank is still taking the lead in financial inclusion drive in the country with its 750 business locations and over 180,000 Banking Agents including 55,000 female FirstMonie agents spread across the 774 Local Government Areas in Nigeria. Besides these, the bank has been handy at promoting digital payment in the country and has issued over 10 million cards, the first bank to achieve such a milestone in the country. FirstBank’s cashless transaction drive extends to having more than 10 million people on its USSD Quick Banking service through the nationally renowned *894# Banking code and over 4.5 million people on FirstMobile platform.

We must rescue naira