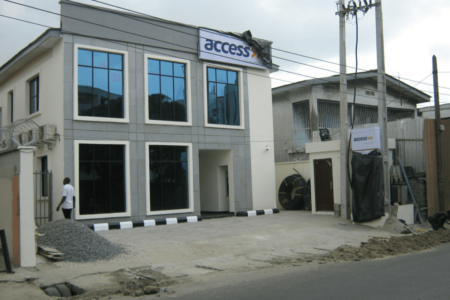 Access Bank Plc. on Wednesday advised customers to use alternate branches following a fire that gutted one of its branches on Victoria Island, Lagos State.

The Company Secretary, Sunday Ekwochi, gave the advice in a statement to the Nigerian Stock Exchange (NSE).

ALSO READ: I got N1m from my landlady to kill UNIBEN female student for ritual, says suspected killer

“This is to inform the investing public, our esteemed customers and the NSE that the fire incident which occurred this morning in our branch at Adetokunbo Ademola Street, Victoria Island, has been extinguished without any human casualty.

“We would like to thank every organisation and individual that helped in managing the situation.

“In the meantime, our customers of the said branch are advised to make use of alternative branches on Victoria Island, Lagos,” he said.

Mr Ekwochi said that the fire was caused by a tanker discharging diesel to the branch.

He said, however, that no human casualty was recorded in the inferno.

Fani-Kayode’s Attack On Daily Trust Reporter: Our Stand
The management of Media Trust Limited, publishers of Daily Trust and other titles, condemn the reprehensible actions of Femi Fani-Kayode, who, in a video clip now gone viral, verbally assaulted – repeatedly – our reporter, Eyo Charles in the course of doing his job. The encounter occurred in Calabar, Cross River State, in the morning of Thursday 20, August 2020 at a hotel, during a roundtable with invited journalists…

I got N1m from my landlady to kill UNIBEN female student for ritual, says suspected killer