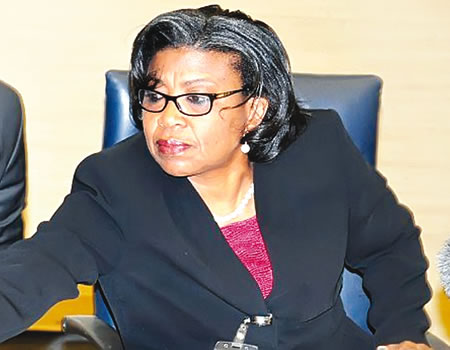 The Debt Management Office (DMO), has said that as of September 2019, the Federal Government, States and the Federal Capital Territory (FCT) debt profile stood at N26.215 trillion.

The DMO further stated that the comparative figure for June 2019 was N25.701 trillion which implies that in the quarter of July to September 2019 the Total Public Debt grew by 2.0%.

The Director General of DMO, Ms Patience Oniha said the ratio of Domestic Debt to External Debt at 69:31 was about the same as at June 2019 of 68:32 compared to the target of 60:40 in the Medium-Term Debt Strategy.

This is contained in a statement issued by the DMO after a Press conference held on Friday in Abuja.

According to the statement, “the Debt Management Office (DMO) at a series of the interactive session presented a review of activities and its plans for raising capital from domestic and external sources in the year 2020.

“The session involved banks and institutional investors in the federal government of Nigeria securities amongst which were  Pension Funds Administrators (PFA), Insurance Companies, Fund and Asset Managers. A similar Interactive Session was held with the media on January 17, 2020.

“At the Interactive Sessions which held in Lagos and Abuja, the DMO stated amongst others, that the level of New Borrowings in the Appropriation Acts declined consistently since Nigeria exited the recession in the year 2017. It also reiterated the fact that the increase in the New Borrowings in the Appropriations Acts between 2015 and 2017 was due to the need to stimulate growth and create jobs in the economy as contained in the Economic Recovery Growth Plan (ERGP)”.

Furthermore, the statement noted that “the Presentation by the DMO at the Interactive Sessions showed that the Total Public Debt, comprising the Debts of the FGN, 36 States and the Federal Capital Territory (FCT) as at September 2019 stood at N26.215Trillion.

“The comparative figure for June 2019 was N25.701 Trillion which implies that in the quarter of July to September 2019 the Total Public Debt grew by 2.0%. The DMO also stated that the Total Public Debt as at September 2019 includes Promissory Notes in the amount of N821.651 billion which had been issued to settle the FGN’s arrears to Oil Marketing Companies and State Governments under the Promissory Programme approved by the Federal Executive Council and the National Assembly.

“In addition, the stakeholders at the Interactive Sessions were informed that whereas the 2019 Appropriation Act provided for a total New Borrowing of N1, 605.63 Billion split equally between Domestic and External, only the domestic component of N802.82 Billion was raised due to the late passage of the 2019 Appropriation Act and the expectation that the implementation of the 2020 Budget would commence on January 1, 2020”.

The statement said amongst the highlights of the DMO’s achievements for 2019 was the issuance of a 30-year FGN Bond for the first time.

It also said the introduction of the 30-year Bond was to meet the investment needs of long-term investors such as insurance companies and support the development of the domestic financial markets in areas such as mortgages.

“From the Federal Government of Nigeria perspective, the 30-year Bond also contributed to reducing the refinancing risks of the Public Debt Stock. The product has enjoyed a strong demand as N284.391 billion and N570 billion had been issued by the end of September 2019 and December 2019 respectively.

“The Ratio of Long Term to Short Term Debt in the Domestic Debt was 80:20 which shows that the target of 75:25 had been outperformed”, the statement added.

‘Similarly, Total Debt as a percentage of GDP was 18.47% as at September 2019 was well within the limit of 25% and fares better in comparison with the Debt/GDP ratios of countries such as the United States of America, United Kingdom and Canada with ratios of 105%, 85% and 90% respectively for the same period.

“However, because they generate adequate revenues, their Debt Service/Revenue Ratios for the same period were much lower at 12.5%, 7.5% and 7.5% respectively when compared to Nigeria’s 51% in 2017”, DMO noted.

It said the low revenue base of Nigeria relative to its GDP is clearly reflected in the high Debt Service to Revenue Ratio.

This according to the DMO, clearly brings to fore, the need for revenues to grow. The efforts towards increasing and diversifying revenue such as the passage of the Finance Act and strategic Revenue Growth Initiative of the Federal Ministry of Finance, Budget and National Planning should thus be supported.

The DMO also unveiled its plans for the year 2020, based on the New Borrowings in the 2020 Appropriation Acts, which comprises of N850 billion and N744.99 billion for External and Domestic Borrowings respectively.

For External Borrowings the strategy is to first seek out concessionary and semi concessionary loans due to the lower interest rate and longer tenors. Any shortfall thereafter may be raised from commercial sources.