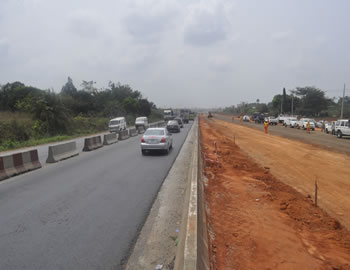 The Permanent Secretary in the Federal Ministry of Works and Housing, Alhaji Babangida Hussain, has reinstated the commitment of the Federal Government towards the completion of the Lagos-Ibadan expressway’s reconstruction.

Despite the present teething challenges, he assured that the 127.6 kilometre long expressway, starting from Ojota-Lagos to Ibadan Toll Gate in Oyo State will be completed as scheduled in 2022.

Besides, he added that other federal roads and bridge projects on-going in Lagos would be completed to ease traffic congestion in the metropolis.

The permanent secretary, who was on a two-day inspection tour to Lagos State, told journalists that he, was impressed with progress made with some of the projects he visited.

Despite efforts to accelerate work on the Lagos-Ibadan Expressway project,   Hussain said the issues regarding compilation of compensations to owners of affected property and relocation of existing utilities on the project’s Right of Way (RoW) were identified as major challenges delaying its progress.

According to the permanent secretary, the identified challenges have been slowing down the road project.

Hussain, who was led by the officials of the ministry comprising directors and Lagos’ Controller of Work, Mr Kayode Popoola, to the tour of the expressway, described the progress of work on the road as “impressive.”

He said “Actually this year, parts of the challenges we are having are compensation issue and issue of relocation of existing utilities.

“These are what is slowing down the project, and that is why I’m here and I can see we have to really work fast to match the progress of work.”

“We hope to complete the project as scheduled,” he said.

The permanent secretary said most of the houses affected (uncompleted structures and property) were behind the wall of the proposed interchange bridge at Lotto Bus Stop, which is under construction,  near the Redemption Camp on the expressway.

He assured that compensation would be paid soon immediately the committee in-charge completed its work, adding that about 40 buildings would have to give way for now.

‘A lot of demolition work and of course, you have to work with the state government to address this kind of issue.  Overall, we are working fast,” Hussain said.

The permanent secretary also disclosed government’s plan to resuscitate the moribund Onikan artisans’ training school to take care of the dearth in skilled workers in the country.

Earlier, he assured that repair of the Airport Road flyover in Lagos, which was badly damaged by petro tanker’s fire in January, would commence by the end of this month.

The permanent secretary said “We have concluded the technical evaluation of the damaged bridge, we have done the integrity test, what we are doing now is procurement process.

“The bridge issue is an emergency work. Procurement will be concluded at the end of the month and the repair work will commence immediately.”

200 metres of the rigid pavement of the expressway reconstruction project was burnt. Also, the deck of the flyover was burnt and its pier badly damaged, raising fears of the structural instability of the bridge.