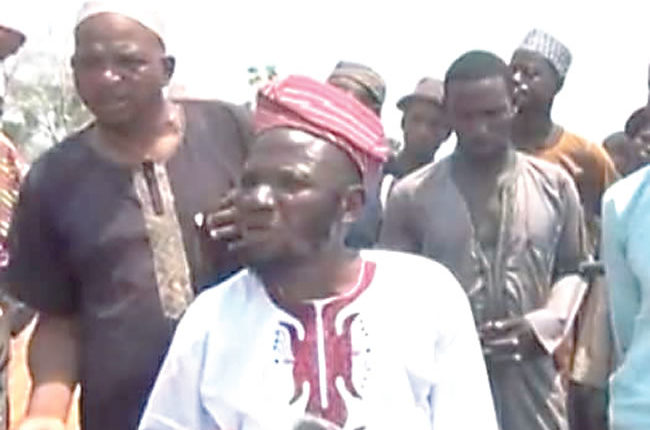 FOR Bamikunle Rasaq Tunde, life lost meaning early in the year when he lost his bee farm worth N15 million to herdsmen who invaded his farm, harvested 1,200 beehives and set the farm on fire. Though he had been suffering losses on his farm annually as a result of herdsmen destroying his farm, this year, the loss was massive and the damage irreparable as he lost his entire source of livelihood.

He was not the only one the loss affected, as a physically challenged person, he had been using proceeds from the farm to help people living with disabilities in Oke-Ogun, but that has stopped as the source of the finances had been destroyed. Also his labourers from different parts of the country — Nasarawa, Plateau and Benue, among others — have become jobless and hopeless.

In order to survive, he moved into planting cheaper crops; cassava and maize farming but this suffered the same fate and sent him back into the hole of helplessness.

“The source of my livelihood is gone. What the Fulani herdsmen are doing is terrible. It is from this farm I empower people but the Fulani  are a problem. They made me lose everything. The Fulani men harvested my honey and burnt the farm. I had 1,200 beehives worth more than 10million naira but now I don’t have anything.

“There are records of this. Agro RANGERS security agents arrested Fulani men on my farm on many occasions. The record is with them but nothing came out of it. I don’t know what to say again about the wanton destruction of my farm, is it possible for us to go to their land and kill their cow?

“Why are they doing this? See what they are doing to me in this condition, I only have one hand and one leg. Yet, they are disturbing me, I am discouraged. How will I survive? They want to turn me into a beggar,” he told Nigerian Tribune.

Bamikunle has however risen from the ashes of his loss and is determined to ensure that farmers do not go through unnecessary hardship and loss again. He established a foundation called Baba 70 foundation farm project with the purpose of creating  a platform for mediation between farmers and herdsmen and the first mediation process took place in Alaga village in Itesiwaju Local Government Area of Oyo State on March 13.

His vision is to create an environment conducive for peaceful coexistence so that invasion and destruction of farmland will be eradicated and others would not suffer the same fate that befell him.

According to him, “I do not have hate for any tribe; I have workers from different parts of the country and we all relate well. I am only encouraging people to work, so I don’t know why they continue doing this.

“Despite my loss, I am embarking on this mission so that my people will have respite. That is why we held the peace meeting with the Fulani community so we can avoid constant clashes because the farming chain is dominated by youths who are already frustrated and may become violent. My mission is to create jobs for the unemployed people in my area because the suffering is too much,” he stated.

Bamikunle however pleaded for government intervention, adding that there is no way normalcy can be restored if the government does not consider the plight of farmers, reiterating that the dangers of cattle grazing is devastating on farmers.

“Government should help us with security in this area to avoid unnecessary clashes. We need farm implements; tractors, improved seeds (hybrid), chemicals and cash to get more land to help the youths. Our government cannot continue to fold hands while lives of people continually get destroyed by a set of people.

“To ensure food security in the country, farmers must be protected and farmlands should not be turned to grazing field with farm produce trampled and fed to cows. This is disheartening and government must take it seriously because many farmers have gone bankrupt and cannot even repay loans.

“As our foundation works to improve the welfare of farmers and see to their protection, government should also endeavour to do the right thing,” Bamikunle said.

He explained further that his foundation had secured 500 acres of land that youths can farm on but needs government intervention and help from well-meaning Nigerians in terms of tractors, improved seedlings, chemicals and monetary aid to move the vision forward.