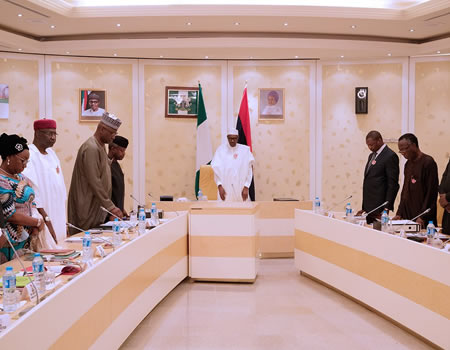 The Federal Executive Council (FEC) on Wednesday approved the establishment of four new private universities in the country.

He said they were approved by the council having fulfilled the criteria for establishing a new university upon the visitation by the National Universities Commission (NUC).

Also at the briefing, the Minister of State for Petroleum, Dr Ibe Kachikwu said that the FEC approved the engineering procurement construction and installation for Opoho Okoho flexible pipelines in OML 119 and Escravos to Lagos gas pipeline phase one for additional unforeseen works in engineering.

He said: “The total contract sum was $3.7 billion. The essence of this was that in 2014, the pipeline with which we were evacuating crude in that area gave way and so production became very marginal. We were operating an average of about twenty thousand barrels a day as against about thirty-seven, forty thousand barrels.

“This contract was, therefore, to replace that pipeline with a new technological flexible pipeline. The last pipeline lasted for only 50 years a lot of corrosive environment in which they operated. It is a nine-month contract. When completed, we will be able to get back production to forty thousand barrels per day.

“It is very critical and will generate close to two hundred and seventy million dollars per annum. So it is very important.

“The second approval was on the Escravos to Lagos gas pipeline phase one for additional unforeseen works in engineering, contract had been given in 2008 and it was about 83 per cent complete but additional scope has been added to that pipeline and variation of about nine million dollars was approved today added to the previous amount which was about five billion naira and $177 million.

“With the nine million added today, the new contract figure comes to about five billion naira and about $186 million one hundred and eight-six million dollars.

“That pipeline is so critical; it is what helps us move stranded gas out of the Escravos of oil region back into the Escravos Lagos pipeline. It is two months contract.”

On his part, Minister of State for Aviation, Hedi Sirika, said the Council approved the contract for the procurement and installation of the second phase of Controller-pilot data link communications for the Kano flight information region.

He said the new policy is meant to institutionalize a maintenance culture in the country, saying that some of the benefits of the policy would provide an inventory of government assets and job opportunities for hundreds of thousands of Nigerians.

He added: “We have trained artisans at different levels but we haven’t created an economy for them to go and express themselves – Tilers, Bricklayers, Plumbers, landscapers, fitters etc.

“So, we have started with a pilot (scheme) to demonstrate to Council that this will work.

“Some of the things that this will bring include an inventory of all assets that the government owns. It gives us an assessment of the conditions and value, then, it gives us a maintenance framework about what needs to be done after assessments and then a maintenance procurement manual.”